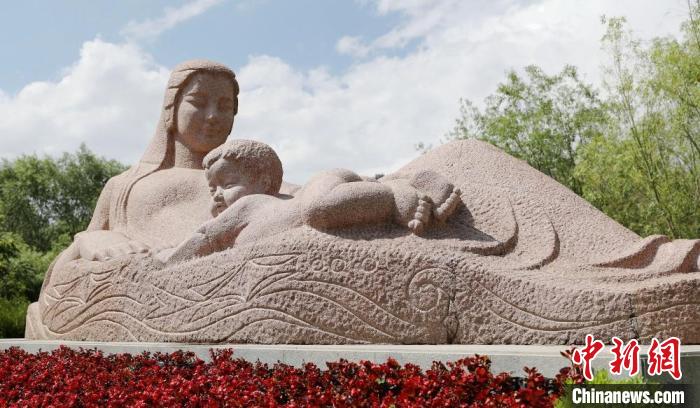 According to locals, the construction of the Liujiaxia Hydropower Station in the upper reaches of the river diverted the Yellow River from east to west, dividing the mountains and rivers into two to form a wonder.

For a long time, the "Mother River" has "moisturized" the people along the coast in a variety of ways.

In Yongjing County, the Silk Road Tour, which took the Three Gorges of the Yellow River as a gravitational point, attracted a large number of tourists from the north to the south.

In particular, Liujiaxia, known as the "Pearl of the Plateau", has attracted attention because of the confrontation of the strange peaks on both sides of the strait, and its rich scenery has also brought considerable tourism dividends to the local people.

From the 16th to the 18th, a reporter from Chinanews.com visited the museum along with the interview group of a Chinese Internet theme event on the bank of the mother river, and was told by the Yellow River cultural enthusiasts that "this museum is worth seeing."

The Yellow River "two in and two out" in Gansu, passing through the desert Gobi, mountain plateaus, and alpine meadows, has created a unique urban culture, ethnic customs and historical relics.

As the only capital city in the country where the Yellow River passes through the city and a major Silk Road town, Lanzhou has built dozens of miles of the Yellow River style line based on it in recent years, and has been continuously upgraded and upgraded to "out of the circle".

The place where the Yellow River passes is densely woven with colorful bridges, and under the bridges, sheepskin rafts, Yellow River cruise ships, and speedboats roam.

Along the line there is also the century-old Zhongshan Bridge that "returned to youth" due to the light show, and the Yellow River sculpture corridor of the "Mother of the Yellow River". These landscapes are even more seductive in the colorful autumn.

Jiang Wenxu, a 60-year-old tourist from Kunming, said in an interview that he had been looking at the Mother River in a geography textbook since he was a child, and now he and his wife made a special trip to the Yellow River to see the sculpture of the "Yellow River Mother". He felt very kind and excited.

Later, I plan to go to the Yellow River Tower and Baita Mountain, "to appreciate the autumn style on the coast of the Yellow River, and I hope to see Lanzhou in the four seasons."

As the only capital city in the country where the Yellow River passes through the city, Lanzhou City develops along the river.

At present, a 20-kilometer-long slow fitness trail loop has been created in the core area of ​​the Fengqing Line. At the same time, night scene lighting is implemented at 39 nodes to fully display the night scene of one bridge and one scene on both sides of the Yellow River, making "night "Traveling the Yellow River" has become a well-known brand of tourism in Lanzhou.

Shi Lei, a staff member of the Yellow River Management Station of Lanzhou City, said that in recent years, Lanzhou City has increased the comprehensive management of the Yellow River, and has successively implemented a series of measures such as the special action of "handing in hand to clear up the four chaos and protect the mother river", forming a unique natural and cultural landscape. "Now the Yellow River is like a'Jade Belt' passing through the city. With the wide Binhe Road, tourists, trees lined with trees, and the north and south banks have gradually become beautiful landscapes."

The Yellow River flows through the yellow land and also forms an "S"-shaped Tai Chi bend in Shichuan Town, Gaolan County, Lanzhou, nurturing 10,000 acres of "the world's first ancient pear orchard" certified by the Guinness Book of the World.

During the blooming season, the owner of the pear garden set up a table and chairs under the tree, waiting for tourists to put on Hanfu, enjoy the flowers, eat hot pot, wine and chat to enjoy the beautiful scenery.