China News Service, Zhengzhou, October 15 (Zhang Ni, Shangguan Yun, Chen Haifeng, Ji Xiang, Kan Li) Imagine this: On a weekend more than 5,000 years ago, a family did not go to work. In a three-bedroom and one-living home, steaming a few steamed buns and stalling two large ones What's the scene with cakes and wine glasses shaking?   On the afternoon of October 14, the interview team of the "Chi 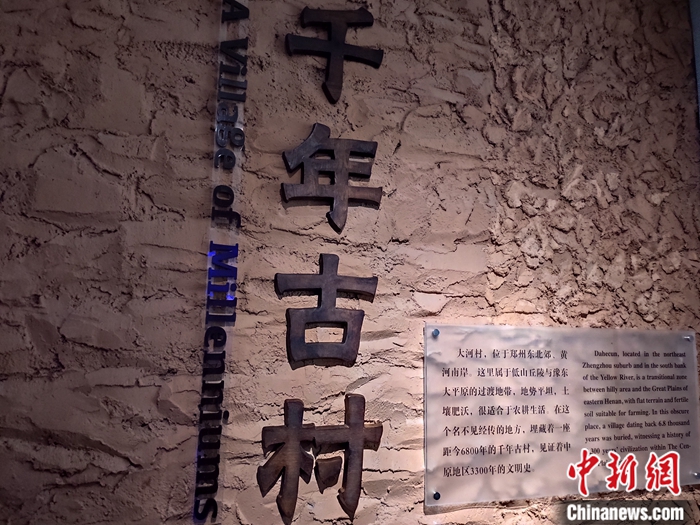 China News Service, Zhengzhou, October 15 (Zhang Ni, Shangguan Yun, Chen Haifeng, Ji Xiang, Kan Li) Imagine this: On a weekend more than 5,000 years ago, a family did not go to work. In a three-bedroom and one-living home, steaming a few steamed buns and stalling two large ones What's the scene with cakes and wine glasses shaking?

On the afternoon of October 14, the interview team of the "China on the Mother River" web-themed event walked into the Zhengzhou Dahe Village Site Museum.

Here, from the residential sites thousands of years ago, the unearthed pottery pans, pottery grate and other living utensils similar to modern electric baking pans, steamers, etc., are full of luxuriant arrays, giving a glimpse of the home life and wisdom of the ancients.

The Dahe Village site is located in the northeast of Zhengzhou's downtown area. It is a large ancient settlement site containing the four archaeological cultures of Yangshao, Longshan, Xia, and Shang. It is 6800-3500 years ago, and the cultural layer is 12.5 meters thick.

According to reports, the site is an iconic site of the origin of Chinese civilization and the most exciting part of the Yellow River culture. It has participated in and witnessed the entire process of the origin, formation and development of Chinese civilization until the establishment of the Xia and Shang slavery dynasties. It has rich cultural connotations. The cultural chain is complete.

The site was discovered in 1964, and the first excavation was carried out in 1972. It has been excavated 26 times, covering an area of ​​more than 7,000 square meters, accounting for about one-seventh of the total area.

The site is elliptical in plan, 790 meters long from east to west, 670 meters wide from north to south, and covers an area of ​​about 530,000 square meters. It includes city sites, trenches, residential areas, central squares, pottery kilns, and tomb areas. The functional zoning is planned in an orderly manner.

The ruins of the foundation of the three-bedroom and one-living room more than 5,000 years ago.

What you see in the first exhibition hall is the ruins of ancient village buildings. Here, a three-bedroom and one-living room of the Yangshao culture building foundation is impressive.

"This is a house built by ancient ancestors 5000 years ago." According to the guide Han Yachen, this is the most well-preserved prehistoric residential site discovered in our country so far. Although it has gone through more than 5000 years, it still retains a complete layout and 1 meter. How high the walls are, the unearthed ones laid the basic shape of the traditional residential buildings in northern China.

It is of great significance for studying the history of ancient Chinese architecture, discussing the organizational structure of the society and the development of marriage and family at that time.

The walls of the ancient buildings displayed at the site are very strong. The reporter felt the modern imitation mud wall structure on the spot. Although the walls are not smooth and flat, they are as strong as modern masonry houses, or even have them. Victory, this fully embodies the extraordinary wisdom and skilled construction technology of the ancients.

The ancients used pottery pottery for spreading cakes and other daily life.

It is reported that the house construction process at that time was specifically divided into seven steps: piling up soil for foundation laying, excavating foundation trenches, planting pillars, building walls with mud, laying floors, stacking firewood and building roofs.

Among them, firewood burning means that after the walls and floors are built, firewood is piled on the inside and outside of the walls to bake the mud walls with fire.

The mud wall was burnt, showing a rather hard brick red color.

The middle wooden column is carbonized after being barbecued by a fire, resulting in the hollowing of the wall, and the wall and the ground become extremely strong after the barbecue, which has a certain moisture-proof and heat-preservation effect.

In addition to the residence, the wisdom of the ancients is integrated into the bits and pieces of life.

In the museum, many exquisite painted potteries unearthed from the ruins are eye-catching. Among them are the famous painted pottery double-connected pots, water-drawing small-mouth and pointed-bottom bottles, medicine jars, pottery cups, and pottery saucers similar to baking pans and steamers. The brilliant colors, rich patterns, practicality and diversity of the utensils, such as life utensils, pottery grates, etc., fully reflect the pursuit and yearning of the ancients for a better life.

The ancient ancestors lived and multiplied in Dahe Village for more than 3,300 years, creating a splendid ancient culture.

The inheritance and development of culture is inseparable from the wisdom of life contributed by the ancients from generation to generation. As stated in the preface of the museum's exhibition, the brilliant starry sky of Dahe illuminates the progress of Chinese civilization.