Villagers in Weihui, Henan rush to collect vegetables to donate to Shanxi: I don’t want any money 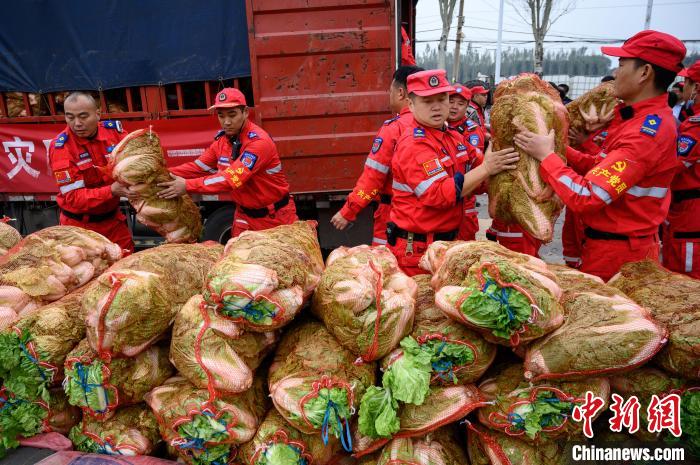 At the donation ceremony, a truck loaded with 15,000 catties of cabbage and radishes was particularly eye-catching.

"Grab the harvest", "repay your favor"...These words were combined with the ordinary cabbage and radish at a high frequency that day.

In July this year, Weihui City was hit by a historical extreme heavy rainfall. As a flood storage and detention area, Shangle Village was severely affected. 33 administrative villages were flooded and all crops were not harvested.

At that time, all their crops were flooded.

Fortunately, under the guidance of agricultural technicians from the Xinxiang Academy of Agricultural Sciences, on August 12, the inundated land in his village began to be replanted and cultivated.

In the re-cultivation and replanting land in Shangle Village, the vegetable cultivation category is cabbage and radish, totaling 87 acres.

However, due to two consecutive rains thereafter, the land with nearly saturated water content was hit again.

As of October 10th, only 11 acres of vegetable plots in Liulitang Village were left in the town's "sufficient fruits".

"Thanksgiving vegetables" from Shangle Village, Weihui, Henan, were distributed to several villages that were hit harder on the 12th.

Originally, the 11 acres of cabbage radish will be on the market in mid-October.

Brothers Li Baomin and Li Baoguo hope to rely on these cabbage radishes to "try their best to recover the losses caused by flooding."

However, because he suddenly learned that "Henan Weihui assisted Shanxi Jiexiu's flood prevention and relief donation" news, the brothers and several other villagers strongly demanded that they voluntarily abandon the soon-to-be rewards.

"I don't want any money. Donate all my dishes to the disaster-stricken area in Shanxi. It turned out that I was affected by the disaster here, and everyone supported me. I want to donate to the disaster-stricken area in Shanxi with a grateful heart. This is my heart." 10 On the same day, Lu Jiamin, the head of the Xinxiang reporter station of Henan Radio and Television Station who interviewed Li Baomin, relayed Li Baomin’s aspirations.

Like the Li Baomin brothers, the other two villagers also took the initiative to join the donation.

On the morning of the 11th, the Li Baomin brothers called the villagers to help plan cabbage and dig carrots.

At 11 o'clock, the 15,000 catties of cabbage and radishes harvested from the 11 acres of vegetable fields were loaded into the truck and departed to Jiexiu City in Shanxi that afternoon.

On the 12th, these cabbage radishes were distributed to Nanqiaotou Village and Hongshan Village, which were hardest hit by the disaster.

Lu Jiamin told a reporter from Chinanews.com that Li Baomin gave this batch of cabbage and radishes a name: Thanksgiving vegetables.

Grateful heart, thank you for being there.