China News Service, Chengdu, October 12 (Liu Zhongjun and Wen Xuan Peng Zhaohui) "Eat green beans at night, and then cook a pot of raking vegetables." On the 12th, the third group of Xingchong Community, Guanyin Street, Pengshan District, Meishan City, Sichuan Province, After a nap, the 105-year-old Yang Xuebin was peeling beans while arranging food for the evening. She is energetic and quick-th 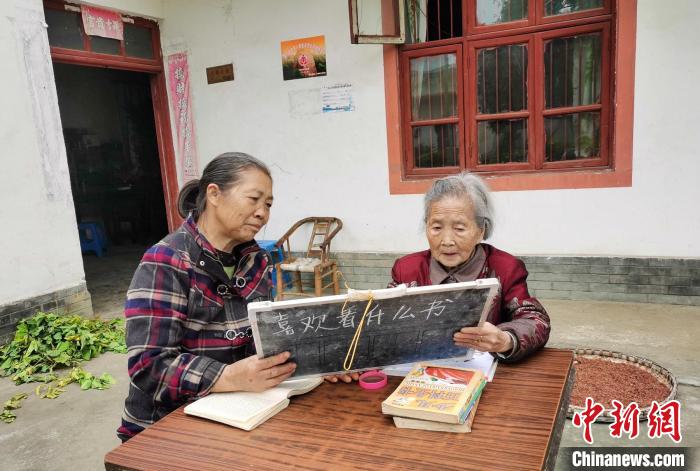 She is energetic and quick-thinking, and she doesn't look like she is in her 100s at all.

Born in 1916, Yang Xuebin graduated from Meishan Normal School. He taught in Pengshan during the Anti-Japanese War, and later met and married his lover who graduated from military academy. He lived in Chengdu and Nanchong after the army.

In 1952, when her lover changed career, Yang Xuebin returned to Pengshan to settle down. Now her eldest son is in his 80s and the younger son is in his 70s.

Liu Guizhen, the daughter-in-law of the old man Yang Xuebin, said that apart from some ear and hearing problems, the old man is healthy, has a cheerful personality, and has good eyesight. He reads books and newspapers whenever he has time.

Entering the old man Yang Xuebin's room, the boxes and bedside are full of books, many of which have been turned through very shabby.

"I like to read hero stories, like Lei Feng, Qiu Shaoyun, Huang Jiguang." The old man Yang Xuebin can not only say the names of these heroes, but also clearly tell the lives of the characters.

From the Republic of China, the War of Resistance Against Japan, reform and opening up...Along the way, Yang Xuebin has witnessed tremendous changes in social life.

Although his hearing is not good, the old man likes to talk with people, making gestures while talking, and even writes and communicates on the small blackboard his son previously prepared for her.

Even though she is over a hundred years old, Yang Xuebin did not sloppy in writing, and the correct font is also a habit she has cultivated throughout her life.

"Everyone says that there is an old person in the family, and if there is a treasure, the family will take care of it." Liu Guizhen said that the old mother is also a person who can't stay idle. Grow up, and then go back to the house to help with cooking... She does everything within her capacity every day, and she rarely gets sick throughout the year.

In addition, the old man has to meet his old friends to fight "Fight Fourteen" (a local card) when he is free.

"Don't look at her age, but she has quick thinking and sharp eyes. Many neighbors who are dozens of years younger are not as good as her in playing cards." Liu Guizhen said with a smile.

Talking about the secrets of longevity for the elderly, their family members said that the elderly have a gentle and quiet personality, do not care about everything, and have never had disputes with family members or neighbors, and get along well with their sons and daughters-in-law.

"You have to be open-minded, don't worry about anything, sleep well and eat well, and you will be healthy and healthy." Old man Yang Xuebin said that he should have a good mentality and not be anxious and not worry about things. This is the secret of his longevity.