[Open Voice] Yang Li: The past year has been the least lost year for me

【Opening】Editor's note:   Dialogue with popular people and understand the story behind the news. One person with one face, or one person with a thousand faces? Speaking is not only the communication of words, but also the touch of the soul. Here, the protagonist of the news becomes more three-dimensional.   WASHINGTON client Beijing October 12 electric question: Yang Li: In the past year, but ra 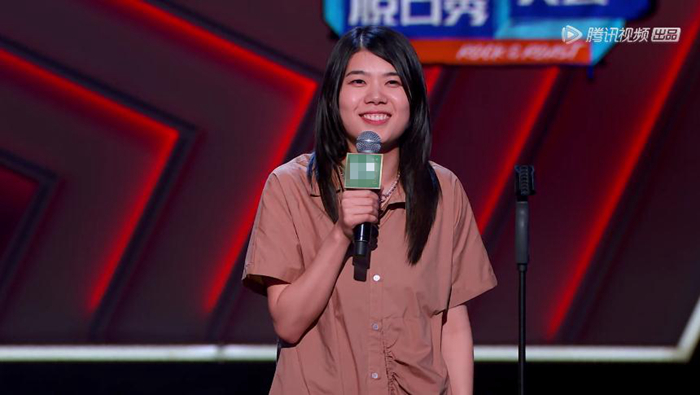 Dialogue with popular people and understand the story behind the news.

Speaking is not only the communication of words, but also the touch of the soul.

Here, the protagonist of the news becomes more three-dimensional.

question: Yang Li: In the past year, but rather I was not confused most of the year

"Are you ready to hear some sharp male and female topics?" Yang Li ignited the audience at the beginning of the fourth season of "Talk Show".

Coming to the stage of this season, Yang Li said frankly that she wanted to lay down some burdens. Whether it was everyone's expectations or personal expression needs, she wanted to talk about something that would serve her better.

In the past year, she became popular and became involved in controversy.

Her offline talk show performances became less, because she was busy, and also because after she arrived at the scene, she realized that everyone’s expectations were a little different. "That feeling is very good, but when I go to the show, the audience they look forward to the most. When you are this person, you will find that the show no longer attracts you so much."

In the past year, she has had more work in variety show recording, commercial recording, and fashion shooting. She actively accepted and tried the changes between the identity of talk show actors and entertainers in an attempt to enrich herself.

In the show, she said that being scolded is also good. The whole person is very active and works harder. "It's an absolutely true feeling, it's really amazing."

In her opinion, the past year has been the least confused year in her first half of her life.

The following is what Yang Li said (edited):

It’s a bit boring for me to explode every issue

From the beginning of the recording to the current finals, basically there are advantages and disadvantages.

The disadvantage is that the audience expects you to be very high, and then you must blow up the scene, every time you must have a lot of laughter, which is a bit boring to me.

But the advantage is that your basic price will be very high and the votes will not be too low.

I think talk show actors basically have a very important quality, which is to predict what the audience expects of you.

But my trouble is that even if you foresee this, how to deal with this matter, you also have your own concerns or want to stick to the direction.

Sometimes it seems that you have to give up something, there is no way to really fully satisfy the audience's expectations.

And you will have a challenge, that is, how to exceed their expectations?

How to bring them new things?

If I have the pressure of "I must be the funniest" every issue, I think this season is a repeat of the previous season for me, it would be a bit boring.

For example, when I talked about love, I had something that I really wanted to talk about at that time. I knew that the laughs were not close enough, and I didn’t know how to make it technically funny at the time. It’s not like that. Instead, go inside, and finally choose to make it serve you better.

The topic you want to discuss will definitely change every time, but from a technical point of view, you can repeat yourself.

It's just that when you have higher pursuits, you don't want to. I don't have any moral burden on these two points.

There is nothing new under the sun. It’s not that I’ve been thinking about a topic for a few months and I’m going to talk about this issue. It’s actually something that happened to me when I was writing the manuscript one week before I recorded the show, which made me especially touched. , I will write about it, it is a very random thing.

The past year was a very simple year

I think the past year has been a very simple one, because in a situation like mine, you don't have to actively choose, things will come to you.

Wouldn't it be like I used to be, do you want to be a talk show actor or a picture or a screenwriter?

Is it in this company or that company?

How can I find my own state of existence?

But at that time, you were not allowed to choose. A lot of information was waiting for you to digest, so it was the least confused year of my first half of my life. I don't need to find the way by myself. You just need to deal with the current affairs.

I think it’s because of my inherently stubborn character. What I don’t know how to deal with is the plain life and the more nihilistic things. On the

contrary, when you are in a situation of adversity, you will find that you can be aroused to a certain kind of fighting spirit: I must Have a good life.

Regarding the change in identity, I actually took the initiative to accept and work hard to change in this direction, because I feel that growing up on the stage is not as rewarding as recording a show, and I am still eager to go. Do some new work.

The talk show stage is a very simple stage, it is a stage that will always be there.

For example, I have been doing other work for a few years, and finally I have a new experience and insights in my life. I will come back at this time to talk about the stage of the talk show.

On the contrary, if I am only doing talk shows and reject some artist jobs that I may not be good at, and my life is no longer going forward, then what I can do on the talk show stage is to repeat myself. , And the repetition is not as good as the original.

So I think this matter is not anxious. It does not mean how much progress you can make when you soak on the talk show stage every day, but you want to enrich your life as much as possible, so I am very proactive. In accepting and looking for changes.

I was very repulsive from taking pictures at the beginning. I really didn’t know what to do in front of the camera, but I found out that taking pictures was actually acting. It was supported by my heart. I tried to give myself a role. Later, I also realized that the fun of taking pictures is The fun of acting.

For me, recording variety shows is that I like to chat with people, and chatting is also a very simple thing to do.

And I am curious about people, curious about what other people think, especially those artists. You know but don't understand him. When you see him, that's pretty good.

In fact, my observations this year are a bit unsuitable for writing talk shows, because talk shows have to resonate with the audience. My things this year are more dramatic, it is not very life-oriented, and I don’t have a strong desire to It is written into the wish in the talk show.

The talk show is still a pure industry

Getting in touch with the talk show industry was very simple at the beginning. I wanted to find someone to listen to me.

I quit my job and paint at home every day, and my classmates are working. In fact, people don’t have much time to chat with you, and life is under a lot of pressure. At that time, I happened to see "Tucao Conference" and I knew that there were still some people doing talk shows in China. of.

I was in Beijing at the time and I went there. The best time to join the industry was caught up by me. As long as you go, the club will work hard to sign you down and stay, so I will be on stage soon, and then I will start talking. show.

Every Monday I have the opportunity to talk about the talk show. I also want to thank my parents for their support. They don’t think you should be an idler, just have a job. They didn’t say that this job is unreliable, and asked me when I can make money from it. "Just do it."

After I did this job, it went very smoothly. People in the industry always praise me, saying that you are special, you must talk about something, and have not encountered any particularly difficult bottlenecks, just go from one club to another. Club, then went to be a show screenwriter, and went on the show naturally, all the way to the present.

From then to now, the

talk show industry must have been commercialized, but in fact it is still a pure industry in nature. Everyone is still very simple

. Everyone comes from all corners of the world. They were originally part-timers, from part-time to full-time. There are relatively few ideas, and most of them want to talk about how to do it well.

So after doing this job, I am very happy and have made friends who I think are very upright.

This is the biggest change I think this industry has made for me. My character has become more gentle, because the people around me are pretty good, and I don't have the feeling of being stabbed all over.

There is another change that everyone has seen, and maybe my life has become better.

If you consider humor and depth when creating, I will care about the degree of humor, because depth is a little bit of content, something that can be easily achieved for me, but humor is difficult.

People like to watch talk shows because they are popular. How do you make these things popular? Everyone likes to watch them and understand them, and then they can participate in the discussion. In fact, this is a technique.

Humor must be a very scarce quality and a very valuable technique.

For example, there are various good-looking TV series. I was still watching "Parents' Love" some time ago. You think it is good-looking because its lines are very humorous. From a creative point of view, you also think that a good writer knows well.

Anyway, humor must be the hardest. Anyone who says that humor is simple and more difficult is because he is not creative.