A quick-cutting shop in Guanghua Village   People have mixed opinions about the emergence of cheap and convenient "quick cut" barbershops. Some people think that "cheap is not good." Some people think that "people who haven't experienced it don't know what's good."   Recently, the reporter visited and found out that the fast-cutting industry has gradually started a differentiation model: some st 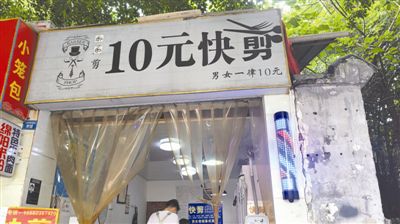 A quick-cutting shop in Guanghua Village

People have mixed opinions about the emergence of cheap and convenient "quick cut" barbershops.

Recently, the reporter visited and found out that the fast-cutting industry has gradually started a differentiation model: some stores closed shortly after they opened, some returned to traditional business models, and some became more and more specialized—many of them were Chain stores with a professional management model require barbers to have rich work experience and a long working life.

It is precisely because of the specialization of fast-cutting shops that the market dominated by the elderly has long changed, and young customers have become the mainstream source of customers.

At the same time, more and more traditional hairdressers barbers have poured into the quick cut market.

How to make money?

This store has opened 33 branches in 5 years

Cooperate with large supermarkets to "borrow" the flow of people

At the Zhongfa Express Cut Store in front of the Wal-Mart Supermarket in Times Qingfeng Square, Chengdu High-tech Zone, regular customers waited for their haircuts to be “zero”.

This speed is unmatched by traditional hairdressers.

The peak hours of off-duty every day are the times when the traffic in the store is highest.

At 8 o'clock in the morning, the two barbers in the shop started to get busy. Two hours later, they had already cut their hair for about 20 office workers.

The boss, Wu Yongqing, told reporters that in January 2016, she opened the first quick-cutting shop in BBK Sanwayao shop. So far, it has opened 33 branches and has not received any large complaints.

How does Wu Yongqing's fast-cutting shop make a lot of people?

According to her, most of the more than 30 branches have cooperation with large supermarkets.

Leveraging on the flow of people from large supermarkets, these fast-cutting stores are seen by more people, and business will naturally come.

“Each shop is equipped with 2 to 3 hairdressers. The best-performing Times Qingfeng shop has more than 200 haircuts every day when busy.” Wu Yongqing introduced, her fast-cutting shop charges 10-15 yuan for a hair cut. The passenger flow is large, and the income is considerable.

In this way, Wu Yongqing accumulated a lot of capital to open branches.

Towards specialization and systematization

The master of "fast and good"

So, just relying on cheap prices, super fast speed, and the promise of not applying for a card and not promoting sales, can the quick cut succeed?

the answer is negative.

Affected by the epidemic, the operation of fast-cutting stores has become divided: some stores collapsed shortly after they opened, some returned to traditional business models, and some became more specialized.

Located at the entrance of Auchan Supermarket on the east of Shuhan Road in Jinniu District, Chengdu, a quick-cutting store that opened last year has now closed down.

A 10-yuan quick-cutting shop located on Zhanqi East Road, Qingyang District, Chengdu. Due to poor business, it returned to the traditional business model a while ago. The price of quick-cutting increased from 10 yuan to 15 yuan.

Why is there differentiation?

Wu Yongqing believes that this has a lot to do with the increasingly professional management of fast-cutting stores.

According to industry and commerce information, the business models of the currently registered quick-cutting shops are mostly chain models, and they already have their own set of systematic and corporatized management rules.

Some well-performing fast-cutting shops have also greatly increased the requirements for barbers. The situation of “cheap but no good products” that was often criticized for fast-cutting in the past is changing.

According to industry insiders, many fast-cutting shops require barbers to have more than 3 years of experience in haircuts.

"You may think it is too talented to let the master cut fast. But you have to know how to cut fast and well is a very technical challenge." Wu Yongqing said.

What are the advantages?

70% of customers are young people

Veteran barber is willing to join

"In the beginning, there were indeed many elderly people. But slowly, young customers have become the main force, and now about 70% of them are young people." Wu Yongqing believes that the reason why fast-cutting shops can attract young people is one reason. There is no need to spend a lot of time waiting in line. Second, the process of applying for a card is eliminated, the price is cheaper, and there are no barbers who keep pushing sales.

On the one hand, the professional skills requirements of barbers have been greatly improved. “The cut hair is better than traditional hairdressing shops.” According to Wu Yongqing, at least 70% of the people who come to the public hair salon are young people.

On the other hand, business management is becoming more professional.

When it comes to the improvement of the professional skills of fast-cutting barbers, many people will be surprised: Why are senior barbers willing to change jobs to fast-cutting shops?

Mr. Leng used to be the perm dyeing director of a well-known traditional hairdressing shop in Chengdu. When he was in the "old club", his work was almost flooded with overtime sales promotion.

In addition, in the past, there were many categories of washing, cutting, blowing, ironing, and dyeing in the store. A customer often had to go through many people and many links to finish his hairstyle. Among them, the complicated colleague relationship made him feel very tired.

Another fast-cutting hairdresser with more than 10 years of work experience said that the period when he worked overtime in a traditional hairdressing salon until 11 o'clock in the evening to discuss how to get customers to apply for a card was his nightmare, and this was the biggest reason for his change of job.