British star Elton John opened, yesterday, from Paris, a series of international concerts, which began with a number of singers and bands, including Stevie Wonder in Los Angeles and Billie Eilish in New York, where Prince Harry and his wife Meghan Markle appeared on stage to raise awareness of the dangers threatening the planet. 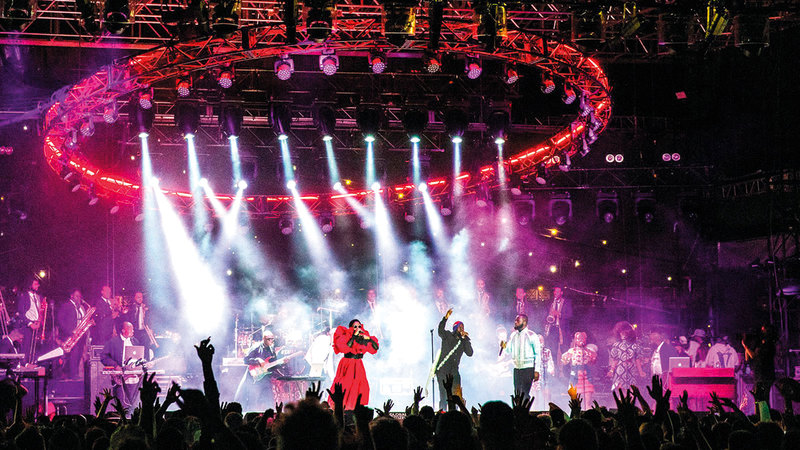 British star Elton John opened, yesterday, from Paris, a series of international concerts that began with a number of singers and bands, including Stevie Wonder in Los Angeles and Billie Eilish in New York, where Prince Harry and his wife Meghan Markle appeared on stage to raise awareness of the dangers threatening the planet, which is The goal of this initiative, launched by the NGO Global Citizen.

Elton John, in his green uniform and his pink glasses, sat alone at the piano on the stage, which was held in the Place de Mars in the French capital, with the Eiffel Tower in the background, giving the starting signal for this event with his songs "This Is Your Song", "Tiny Dancer" and " Rocket Man", in addition to a duet with Charlie Puth, in which he performed the song "After All" from his next album, and launched humanitarian situations.

Sir Elton (74 years), who will soon undergo hip surgery that forced him to postpone his world tour, stressed the need to "leave no one by the wayside" during the current health crisis, calling for "fair access" to vaccines all over the world.

The concerts, as well as pre-recorded performances, presented by BTS from Seoul at the initiative of "Global Citizen", aim to entice large audiences from all over the world to raise issues that the organizers focus on, such as climate change, justice in the distribution of vaccines and the fight against... famine,

They came for Elton.

Elton John presented his concert in Paris in front of about 20,000 spectators who received free tickets in exchange for their contribution to spreading awareness messages from Global Citizen through social networks.

Iwan Cardoso, 23, who works in a car repair and attended the Paris party, said: “I have been following (Global Citizen) for a while, and I registered for a ticket. On my ticket because I had the necessary number of points thanks to my participation in movements for the sake of planet Earth and to combat poverty, most notably my signature on petitions.

Tani, 26, sent e-mails and tweets calling for "fairness in the provision of education and equality for women" to be able to attend the concert in Paris, and she came with her three friends to see "Ed Sheeran, especially Elton John."

As in the “Live Aid” charity party that was presented in 1985 from several cities in the world at the initiative of Bob Geldof to fight famine in Ethiopia, in which Elton John also participated, the “Global Citizen Live” program includes holding shows in other major cities.

Prince Harry and his wife Meghan Markle appeared on stage in Central Park, demanding that vaccination be considered a "basic human right".

The couple's ascension to stage came after a performance by Canadian Alicia Cara and veteran pop singer Cyndi Lauper, who dedicated her song "Girls Just Want To Have Fun" to Afghan women.

At the end of the New York show, the concerts continued with those hosted by the "Greek Theater" in Los Angeles, and opened by the "5 Seconds of Summer" band, and also participated in: Adam Lambert, Stevie Wonder, Demi Lovato and "One Republic".

The initiative covers all continents.

From his native Brazil, DJ Alok launched messages on Global Citizen networks alerting specifically to the situation of the Amazon rainforest.

Elton John opened the parties in Paris, and Prince Harry and his wife Meghan Markle were in New York.