It's in your nature - After the fire (2/2): Hermann's tortoise is resistant

After the biggest summer fire in France, on the Côte d'Azur, “C'est dans ta nature” returned to the Plaine des Maures, one of the last sanctuaries of the only land turtle present… 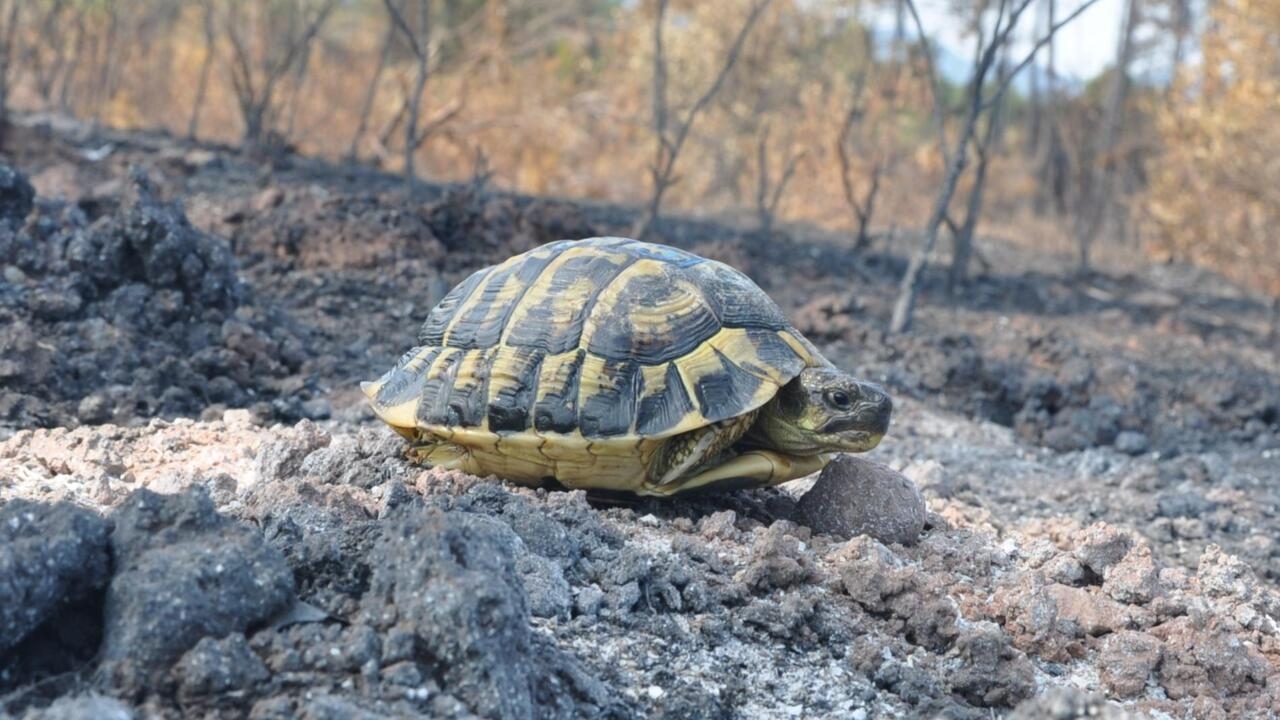 After the fire (2/2): Hermann's tortoise is resistant

A Hermann turtle survivor of the fire, in the Plaine des Maures, on the Côte d'Azur.

After the biggest summer fire in France, on the Côte d'Azur, "C'est dans ta nature" returned to the Plaine des Maures, one of the last sanctuaries of the only land turtle present in France , Hermann's tortoise.

The dreaded catastrophe seems to have been avoided.

Over a morning coffee, it's time for a first assessment.

Two weeks after the end of the great fire which destroyed more than 7,000 hectares, a young volunteer, who scoured the Plaine des Maures National Nature Reserve in search of turtles, gave a number full of hope: “

This is the proportion of turtles found alive after the fire has passed.

Hermann's tortoise, the only species of terrestrial tortoise present in mainland France, is here the animal emblem of the region - it is more often called the Maures tortoise.

(Besides the Var, it is only found in Corsica.) Six turtles out of 10 found alive: the reptile finally resisted the flames rather well, whereas last year, after the fire that had struck Ramatuelle, a a little further south, the death rate had exceeded 90%.

During the Plaine des Maures fire, the rapidity of the passage of the fire, driven by a violent wind, allowed in many areas to spare the turtles who get away with wounds, burns to the shell more or less pronounced.

Saved by the heatwave

But another phenomenon explains this higher survival rate than we feared: the heatwave that raged just before the fire. "

Turtles are reptiles and have a habit of restricting their activity, of hiding, of not eating or drinking too much because there aren't too many resources at that time

," explains Sébastien Caron, the scientific manager of Soptom, the Station for the observation and protection of turtles and their environments.

It is said that turtles go into aestivation.

"A form of summer hibernation, where the turtles"

land, do not move, and patiently wait for the heat wave to pass. And it is thanks to this that they were able to protect themselves from the fire, it is there today that we find them

», In cavities, under these stones with sometimes pink tones that make up the landscape of the plain and the Massif des Maures. Thank you for the heatwave! Under the rock to protect themselves from the sun, the turtles were already sheltered when the flames came.

But fire is not Testudo hermanni's only enemy. The human, who clears the brush, who lets his dog wander and play with the turtles, "

who takes or rather poaches

" the shelled reptile to install it in his garden, is also responsible for the disappearance of the Moors turtle, species classified as endangered by IUCN. Today, the prefect of Var has banned the area for walkers, in particular to protect the turtles. "

People can have, under cover of a good intention, the will to save the turtles which they find in their natural environment, thinking to protect them by bringing them home,

notes Concha Agero, the deputy director of the French Office. of biodiversity for the Corsica and Provence-Alpes-Côte d'Azur regions.

In this lunar landscape, blackened by fire, where there is almost nothing left to eat or drink, the turtles adapt.

They are really capable of waiting, of simply fasting, for weeks, even a month, if not longer.

They do not lose weight, they quietly wait for "the beautiful days", in quotes, to arrive.

And "the beautiful days", for a turtle, it is not the sun but the rain,

They are very resistant animals, which have already resisted (for other species at the time, 50 million years ago) to cataclysms. So they know how to do it! We even realized that the year following the fire of 2004, here, the turtles that had survived were doing very well, with a good body mass or even greater than it could be before the fire, simply benefiting from the regrowth of the vegetation which explodes the year after and the years that follow

But several dozen turtles were found injured, the shell more or less burned.

Healing cream, antibiotics, rehydration ... The superficially burnt turtles will be released a few weeks before the start of hibernation, at the end of October, at the beginning of November, before reproducing, hopefully, next year.

We must save the endangered species.

After the fire (1/2): nature is reborn from its ashes