Mérida finished delivery to Plácido Domingo. After the dust that arose after announcing his participation in the &amp; apos; Stone &amp; Music &amp; apos; festival, the tenor received ... 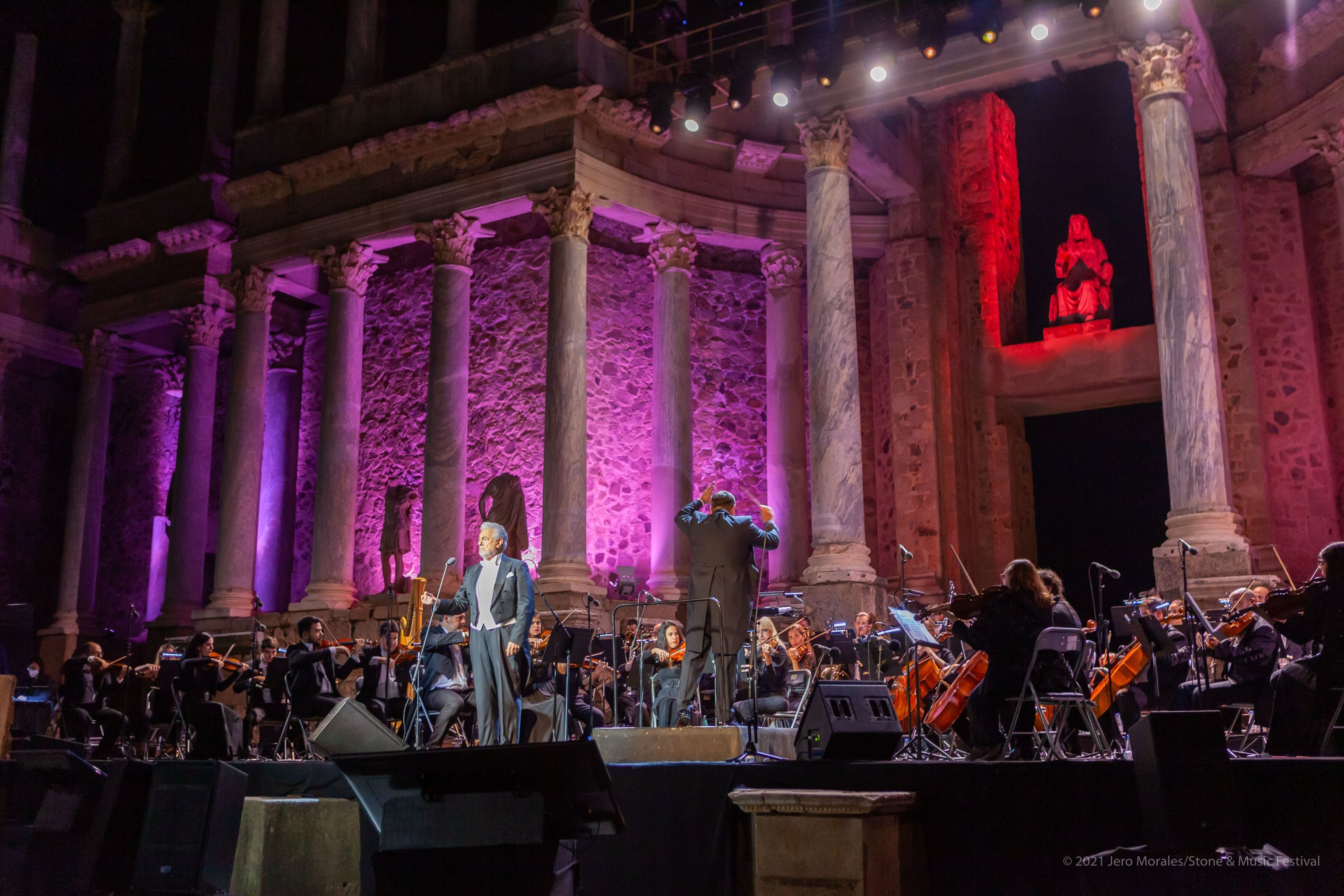 Mérida finished delivery to Plácido Domingo. After the dust storm that arose after announcing his participation in the 'Stone & Music' festival, the tenor received a multitude of affection from an audience that received him and dismissed him -after just two hours of performance- with a loud ovation and standing up. He had earned it hard because, at 80 years old, the Madrilenian showed that he continues to maintain an extraordinary voice and also knew how to be accompanied on stage by two young men with immense talent and voice who were always up to the task: the Romanian soprano Adela Zaharia -who had replaced at the last minute Ana María Martínez, sick leave- and by the tenor glass Xabier Anduaga.

Both were wonderful and together with the Philharmonic Orchestra of Spain, directed by Josep Caballé Doménech, they accompanied the tenor on a triumphant night. Of course, they made Plácido Domingo the institutional vacuum because no political authority was present at the concert, which had already been marked by controversy since the Junta de Extremadura - pressured by the criticism of United We Can - decided to withdraw the Orchestra from the poster from Extremadura, who was going to accompany the tenor, thus losing his members a unique opportunity to perform alongside a star like Plácido Domingo and also on a stage as historic as the Roman Theater of Mérida, where precisely the Madrilenian had not performed for 30 years. The Philharmonic, on the other hand,He took advantage of it with a variety of portentous registers in a lyrical gala where a great variety of works by Verdi, Giordano, Gounod, Donizetti, Thomas, Bizet, Moreno Torroba, Chapí, Vives, Soutullo or Vert were performed, but where above all he had a Zarzuela plays a special role, a repertoire that drew the biggest applause of the night, apart from those who, out of affection, addressed the Madrilenian.

Outside the venue, and before the concert began, some 40 people protested against the tenor's performance in a public venue and at a festival that receives government aid.

They had been summoned by the 8M Association and carried some banners where you could read 'We do not listen to you because we listen to them' or 'Placido abusador'.

The reward, on the other hand, came from the stands, with the long ovations it received from the more than 2,000 people who gathered at the Roman Theater, who launched a clear message to settle any debate, despite the fact that the politicians fled to take a picture with him. "You are an extraordinary and enthusiastic audience," replied the tenor to those present, a Plácido Domingo visibly moved throughout the night, and who became so comfortable and happy that he even took some dance steps with the soprano for a few moments. Adela Zaharia.

Other operas arias sounded at the gala -during the first hour, with a very varied repertoire-, such as the duet of La Traviata between soprano and baritone and that of Les pêcheurs de perles, between tenor and baritone, along with famous arias such as Je veux vivre from Romeo and Juliet, Ah!

The second part of the performance continued with songs from zarzuelas such as Maravilla, Doña Francisquita or La del soto del Parral.

The success of Mérida completes the recognitions that have taken place in recent weeks for Plácido Domingo, who was decorated on the 16th by the President of the Republic of Albania with the title of Knight of the Order of Skënderbej; honored by the President of Bulgaria and the Mayor of Sofia; and was received by the Deputy Prime Minister, the Mayor and the Deputy Mayor of Belgrade at the Spanish Embassy. In Madrid he was awarded, two weeks ago, by the Foreign Press Correspondents Association (ACPE) with the Culture Award for his "immense professional career".

In addition, she had been successful at recent galas with Sonya Yoncheva, Anna Pirozzi, Ermonela Jaho and Anna Netrebko;

as well as in Marbella, the Hungarian city of Györ and Verona, and at the Teatro Greco Antico di Taormina (Sicily) with Verdi's Rigoletto where he received, together with the Italian baritone Leo Nucci, the Bellini Gold Award.

A day before his performance in Mérida, Plácido Domingo had wanted to clarify in an interview with Europa Press that "apologizing does not mean having committed an abuse", referring to statements he made after the accusations made by several women against him . The tenor assured that the accusations of abuse "are a huge misunderstanding" and clarified that "I have never abused anyone or anything and this is the result of internal non-judicial investigations with which I have voluntarily collaborated and there is nothing in the courts ", he stressed while reiterating his apologies" in case he had unintentionally bothered someone ", but has specified that these apologies" are a moral duty. " "Apologizing does not mean having committed abuse," he said. Placido Domingo,who has admitted feeling sadness about the situation. "It is sad that they put labels on me without knowing me, without knowing the truth of the facts, but even sadder that it happens in my country, in Spain, which I carry in my heart and I have always carried it with pride around the world," he said. the composer.

Music Placido Domingo regrets not performing with the Extremadura Orchestra: "Apologizing does not mean having committed an abuse"