At dawn from Friday to Saturday, the Cumbre Vieja volcano let out a new lava flow that was added to the one that had just appeared in the previous hours, but running ... 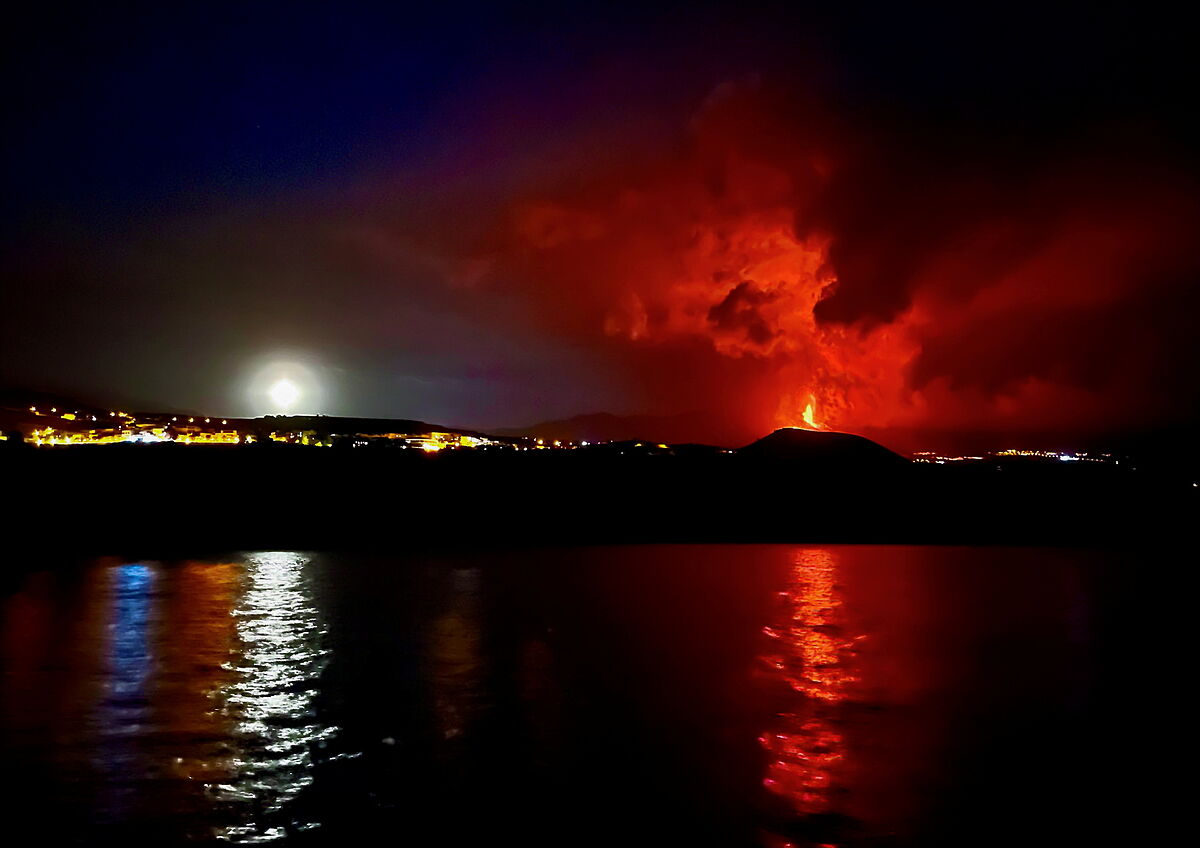 At dawn from Friday to Saturday, the Cumbre Vieja volcano let out a new lava flow that was added to the one that had just appeared in previous hours, but running over it,

with greater fluidity and with more speed

than the first lava flows. the eruption, which will be active for one week tomorrow.

As a consequence of this new emanation, the cone of the volcano has been partially broken.

The breaking of the cone formed by the eruption of the Cumbre Vieja volcano, on the Canary Island of La Palma, facilitates the exit of the lava and makes it more fluid towards the sea, according to the

Geological and Mining Institute of Spain

continues to sample the volcano's ash with the support of the Emergency Military Unit (UME), as reported by this Institute on social media.

, IGME geologist, communicated in a video that the IGME and GES (Canary Islands Government Emergency and Rescue Group) team was addressing the Scientific Committee of the Canary Islands Volcanic Emergency Plan (Pevolca) with "new images" captured by a drone in which it was appreciated "perfectly how the cone is broken in the southwestern part."

Lorenzo added that this was "leaving a huge stream of very large blocks moving down the slope towards the sea."

Since the eruption began last Sunday, September 19, the lava has covered a total of 190.7 hectares,

destroying 420 buildings so far, in addition to 16 kilometers of roads

, according to the latest data from the Union's Copernicus program satellite. European.

but the positive part is that despite the cone breaking, the lava flow is currently slow, reports Europa Press.

In addition, the technical director of

, explained at a press conference this morning that, despite the magnificence and speed of the volcano's activity, this is nevertheless the usual type of Canary Islands eruptions.

Regarding the partial collapse of the cone, the expert has affirmed that it has not had a major impact, except that there was a somewhat more fluid pouring by allowing the lava to escape from more inland areas.

"We are facing a fissure volcanic event of a strombolian nature, which means that the different emission centers that follow one another do so along a fissure, in this case in a northwest-southeast direction, in which a series of emission centers that can be turned off and new ones appear or even those already turned off reappear, "he said this Saturday during the press conference after the meeting of the Pevolca Steering Committee.

Morcuende insisted that it is a "typical" eruption of the archipelago and that,

although during the day this Friday there was a significant increase in the energy of the eruption, "it follows the usual canons"

, which does not exclude dangerousness, therefore who placed special emphasis on the need to take extreme precautions, reports Efe.

He also explained that in the afternoon / night of yesterday, on the northwest face of the crater, there was the opening of two emission centers, which have merged into a single mouth, through which a new stream has been flowing and has been distributed over the previous wash, which ends in the Todoque neighborhood.

"This new casting - he continued - has been very fluid because it comes from more interior parts of the boiler and is at a higher temperature until it begins to cool on the surface and begins to slow down."

At the moment, there is a lava emitting center that is above

being an emission that had been working for the first days and that stopped emitting.

"It does not cause us concern but we are following it," he added.

The evicted will continue like this for another 24 hours

As for the 160 people evicted on Friday, the technical director said that they will stay that way for at least the next 24 hours because despite the fact that yesterday's increase in intensity decreased during the night, in the morning it rose again.

"We will have to give ourselves 24 hours to assess whether they can be safe in their homes," he added.

He also asked neighbors and professionals to move ashes to cover themselves with an FFP2 mask and goggles to prevent the material from causing problems in the eyes and lungs.

he especially emphasized that air quality for citizens is good

, recalling that air quality is constantly monitored and rejecting hoaxes such as the one that says there could be acid rain.

"There is no possibility of acid rain," he remarked.

La PalmaCeniza, the other danger that flies over La Palma: "Air accidents have occurred because of him"

PrivacyHow to disappear from the Internet: the most effective methods to delete even the accounts you do not remember