Mounou Désiré Koffi, a 26-year-old Ivorian artist, creates paintings from the remains of mobile phones. About twenty of his works grouped under the title Abidjan 2.0 are exhibited in this month. 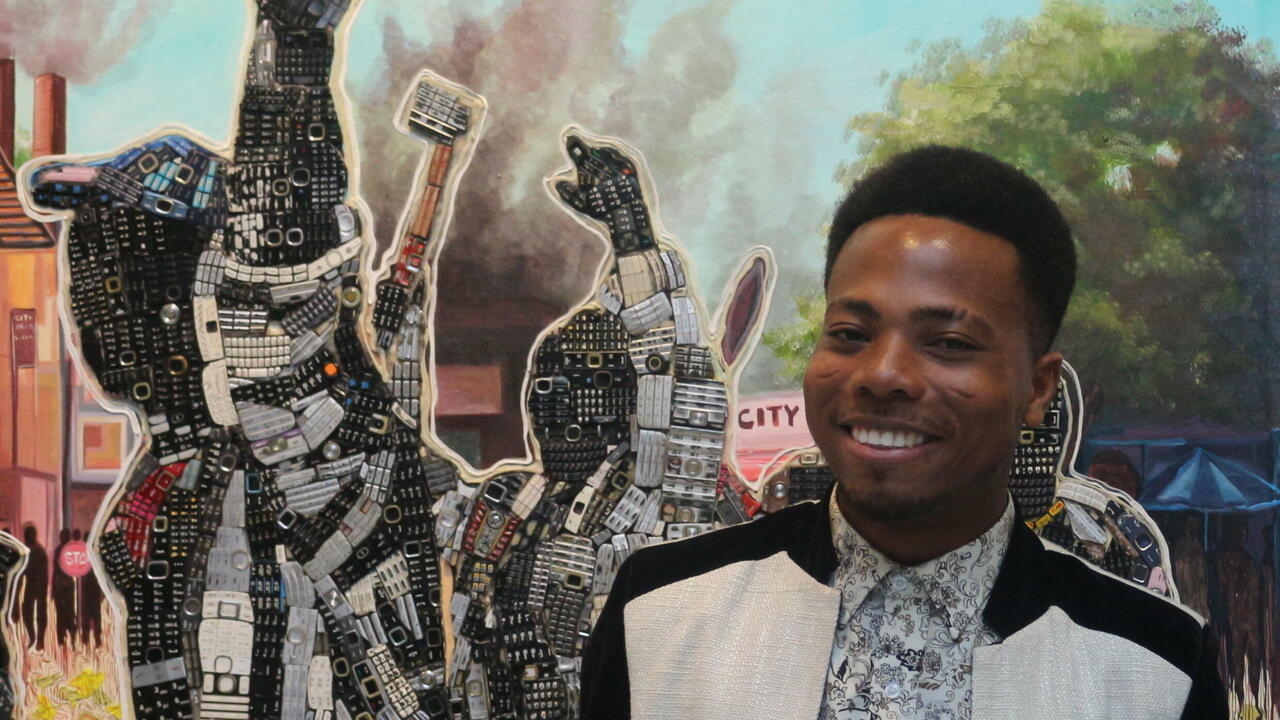 About twenty of his works, grouped under the title

are currently on display in Paris.

Composing tables with old abandoned cell phone keyboards, those where you have to press a key several times to write a letter,

had been thinking about it for a long time.

The young man, originally from Buyo, in western Ivory Coast, graduated from his promotion at the Abidjan Artistic Education High School before earning a degree in Fine Arts in the Ivorian economic capital.

And he quickly found his style.

From childhood, I was surrounded by this waste,

remembers the artist, joined in Abidjan.

I lived in a very polluted neighborhood.

At the time, we couldn't afford laptops, they were a precious object.

"Marriage between impressionism and figurative"

During a previous exhibition, Mounou Désiré Koffi presented canvases in which notably appeared figures of child soldiers, testimony to the violence he faced.

Today, his style has evolved.

For Olivier Sultan, the director of the Art-Z gallery which has accompanied him since his beginnings, the painter “

achieves a happy marriage between impressionism and figurative art

“Proud of his motorcycle”.

And it is true that Mounou Désiré Koffi surprises by the delicacy of his compositions, where the various painted telephone keyboards are juxtaposed.

The artist makes the eyes sparkle, he brings out the details of a face like sweat on a forehead and he captures the color contrasts of cars in a traffic jam.

, the new exhibition, indeed focuses on portraits and street scenes in Abidjan.

In the portraits of children, I try to capture the expression of the faces, to write their own story,"

As for traffic jams, we are faced with it every day! Cars give off a lot of smoke. Through my paintings, I would like people to become aware of this pollution

”. The Ivorian painter thus defines one of his missions: "

Cry for help to alert the authorities

" on the difficulties of the people and the ecological disaster in progress.

A disaster clearly visible on the garbage dumps.

It is there - in Côte d'Ivoire, but also in Benin and Congo - that Mounou Désiré Koffi sends his teams, in search of the most beautiful phones that will appear in his works.

Recently, smartphone touch screens have appeared in the artist's paintings.

He uses it as a virtuoso to "draw" the shadows of the characters in his paintings.

Given the obsolescence of devices and the greed of consumers in search of new products, Mounou Désiré Koffi should not run out of raw material.