Can bone setting really correct your posture? Can I thin my face? Expert: Fake! 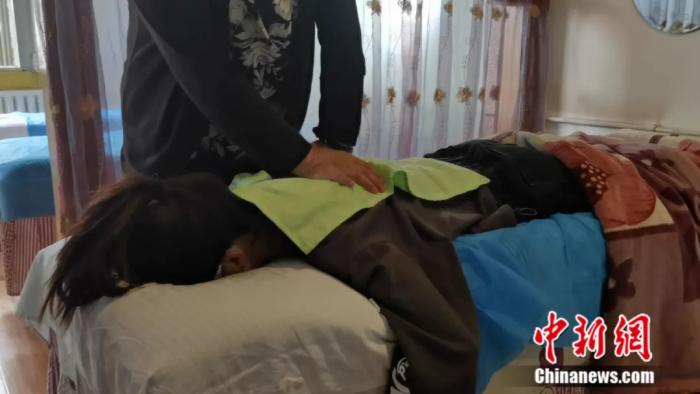 Can I thin my face?

A reporter from Chinanews.com spent two weeks unannounced visits to a number of bone orthopaedics in Xining.

Correction of long and short legs

"The whole body massage is bone-setting, you can be disassembled and reassembled, and it is as comfortable as noodles." "If your spine has been bent after more than 20 years, you can experience being straightened once by eating less hot pot. The crispness" "Bone Orthopedic Reset: It's that simple to be beautiful"...

On September 7, in an alley in Xining, the intersection was full of domestic garbage and construction garbage. Next to the garbage classification sign was a small banner advertisement of "Zhang’s Massage and Restoration". Follow the direction of the arrow and pass through the same pile of garbage. Looking up in the narrow aisle, I saw a banner saying "Zhang's Massage and Bone Repair" was posted on the second floor window.

"Where are you uncomfortable?" asked a middle-aged man who was about 50 years old and was not tall.

There was only one man in the shop, and upon questioning, he was Zhang, who was "Zhang's Massage and Bone Repairing".

The reporter said that he didn't know if he had high and low shoulders, long and short legs, and neck leaning, so he wanted to diagnose and do a bone setting.

"Come on, stand up straight and let me see, um, your shoulders are indeed high and low. Obviously, you still have a hunchback." Zhang pointed to the massage bed in the bedroom and said, you go up and let me have a look.

He pulled up the reporter's feet and gestured and said, "Look, it's obvious that the left leg is longer than the right leg." After a series of neck, arm, and leg pulls, Zhang told the reporter that his legs have been waiting. long.

"I can't see any changes. Before the bone setting, which leg was my length?" Zhang was taken aback for a moment when asked by the reporter, "It's the same length now. The right leg was long before you did it." "No, you clearly said that I originally had a long left leg." Zhang said with a smile, "I can't distinguish between left and right. No matter which leg is long, it is the same length now." Pay at Meituan price After paying 130.3 yuan, Zhang asked the reporter to write him a five-star praise.

Of the six bone-setting restaurants that reporters randomly visited, only two were street shops, and the remaining four were "hidden" in residential buildings.

In addition to correcting body shape, bone setting is also given the role of face-lifting. Chinanews reporters found a lot of related videos on many popular platforms. According to the video, it is possible to solve the problem of large and small faces and left and right faces without moving the knife and the needle. , At the same time, the facial bones make the face smaller, which has the effect of thinning the face and shrinking the chin.

During the reporter’s visit, the reporter found that these so-called bone orthopedics halls either did not have a business license in a conspicuous location, or the business scope on the business license was “health massage” and “life care services (excluding diagnosis and treatment, medical treatment, etc.). ). So, is bone setting a life health care service? Should it be allowed to operate after obtaining permission from the relevant department? The reporter contacted Xining City Administrative Approval Service Bureau. Business activities can only be carried out after the department has been put on record.

Subsequently, the reporter contacted the Health and Health Bureau of Chengzhong District, Xining City. The staff of the Medical and Political Department who did not want to be named stated that strictly speaking, there is no clear dividing line between life physiotherapy and medical physiotherapy in Chinese medicine. There are many massage physiotherapy institutions on the market. They are all life physiotherapy centers, and they do not need to be filed with the health authority.

"There are also no relevant policy documents that require that massage, scraping and cupping, etc. can only be carried out with the approval of the medical authority. The so-called bone setting in physiotherapy centers is actually massage, which involves correction of long and short legs, high and low shoulders, and wealth package. Class, it is not the scope of medical treatment." The staff member said.

Can you really thin your face?

"Bone setting is a treatment method in the Department of Orthopedics and Traumatology of Traditional Chinese Medicine. It is mainly used to treat fractures, dislocations, etc. The orthopedic halls seen on the market are actually aimed at rehabilitation and health care, which are different from the true meaning of orthopedics. "Zheng Feng introduced that young people now blindly go to the orthopedic hall to perform some manual massage, but they often do not have very good results, and even cause some damage.

Zheng Feng said that the first thing to do is to go to a regular hospital to make a film to determine whether the problems such as high and low shoulders and wealth bags are formed by muscles or bones. , Requires surgical treatment.

Zheng Feng measured the length of both lower limbs to reporters on the spot, and they were equal in length.

"If the length of the lower limbs is not equal after the measurement, the cause may be scoliosis and tilt of the pelvis. These two are often combined. This can only be judged by imaging examination." There is also a false long and short leg. It is caused by long-term body leaning, writing on the face, or bad habits such as swaying your legs. It can also cause the spine or pelvis to tilt to one side. It can be corrected by some physical therapy in a regular medical institution. Of course, it is impossible to do it once. Corrected.

Can bones be thinned?

Such as big and small face, left and right face asymmetry, etc.?

"I have been in the industry for nearly 30 years, and I have never heard of'bone setting' face-lifting in clinical practice." Liu Shijie said, this is actually a face shape problem.

One is skeletal problems, and the other is soft tissue problems, mainly bilateral masseter muscles. If you are really dissatisfied with your face shape, you should go to a regular hospital.

"If it is masseter hypertrophy, you can use botulinum toxin in a regular hospital to achieve the purpose of face-lifting. If it is a jaw problem, you can have facial contour plastic surgery. Liu Shijie introduced that there is another disease type, the common ones are: mandibular protrusion For patients with mandibular retraction, etc., orthognathic surgery is to be done. The upper and lower jaws must be cut apart and put in the correct position like building blocks.