China News Service, Shenzhen, September 25 (Reporter Fang Weibin) At the Shenzhen Cultural Fair (hereinafter referred to as the "Cultural Fair"), which is known as the "No. Wings are shown to the audience through cross-border cooperation and novel forms of expression.   After interviewing a number of "intangible cultural heritage" project exhibitors, reporters from Chinanews found that some anc 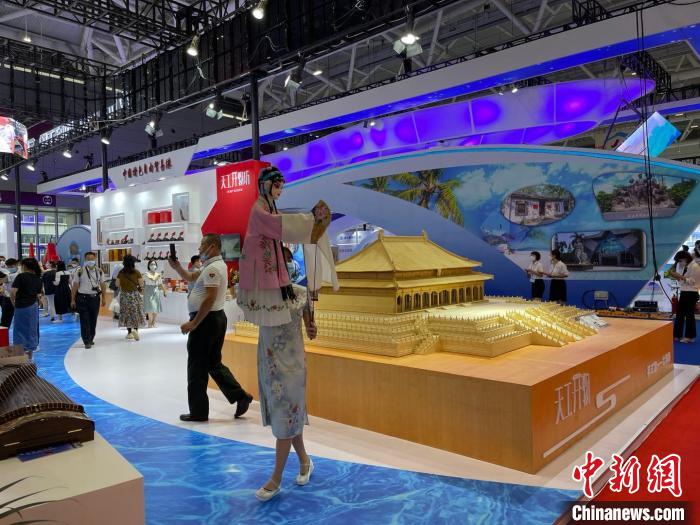 China News Service, Shenzhen, September 25 (Reporter Fang Weibin) At the Shenzhen Cultural Fair (hereinafter referred to as the "Cultural Fair"), which is known as the "No. Wings are shown to the audience through cross-border cooperation and novel forms of expression.

During the Shenzhen Cultural Expo, various cultural activities were staged one after another.

The oil-paper umbrella is an ancient and traditional Chinese umbrella for daily use, which declined with the development of the times.

Bi Liufu told reporters that Luzhou Oil Paper Umbrella has also entered online games, and combined with the online games of "Fantasy Westward Journey" and "Fantasy Xin Zhuxian", it has become a beautiful landscape in the game screen. He personally drew exclusive oil paper umbrellas for the protagonist in the game.

Bi Liufu, who has always adhered to the umbrella of the ancient legal system, emphasized: "Intangible cultural heritage should enter their vision in a form that is more acceptable to young people."

The shape of one arrow pierces the heart, glows at night, and remote-controlled fireworks... The Yangjiang Kite, a project of “Intangible Cultural Heritage” in Guangdong, is entering the field of vision in a form that young people love to hear.

Take their leading centipede kite as an example. He has continuously improved the production process and equipped the kite with LED light-emitting modules. The faucet also has a built-in device for remote control of pyrotechnics. When flying at night, the kite lights up the night sky like stars, and the faucet can also be remotely controlled. Jetting fireworks has become a popular entertainment for young people at night.

It is worth noting that the empowerment of digital technology is a highlight of the inheritance of "intangible cultural heritage".

During the ICIF, Li Dejing, the inheritor of the Sichuan Mianzhu woodblock New Year pictures, kept communicating with technology and cultural and creative enterprises to give Mianzhu New Year pictures the wings of science and technology to attract more young people.

For example, he said that through AR technology, the New Year pictures can be "moved" to tell stories, so that children can receive the influence of traditional culture from an early age.

Li Dejing said frankly that the color pigments of the Mianzhu New Year paintings are all hand-made, and they have to go through more than ten processes such as painting, carving wood, coloring, and hooking. The cumbersome steps discourage many young people who want to learn.

During the exhibition, Li Dejing also produced some pattern templates, which can be quickly printed and refilled with New Year pictures, in order to attract more people to the “intangible cultural heritage” projects.