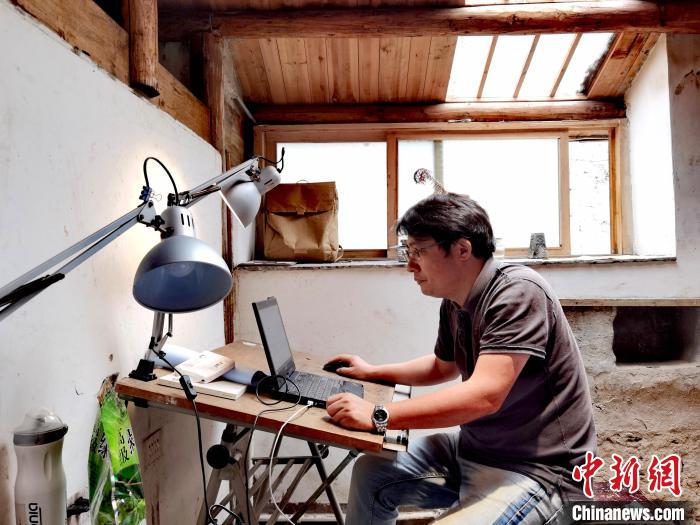 Organizing photography exhibitions, publishing books, making movies, setting up work camps... The purpose of the urban architect Yue Jian of the "post 70s" in Guizhou is to arouse more people's attention and protect the ancient villages.

During the Mid-Autumn Festival, Yue Jian came to Yunshantun, a famous Chinese historical and cultural village in Anshun, Guizhou, to check the progress of the restoration of an old house.

As soon as he arrived at the construction site, he was busy discussing the whereabouts of the drainage ditch and the method of stone masonry with three older craftsmen.

"This will be restored to an artist-in-residence studio to bring it back to life." Yue Jian, standing next to a pile of stones, told reporters that only the foundation and two stone walls were left due to the severe deterioration of the house. The old planks will be reused.

2021 is the eighth year of Yue Jian’s restoration of the old house in Yunshantun. Because his mother is from Tunpu, Anshun, Yue Jian has a special affection for him. He wanders between the city and the countryside all the year round. A unique perspective to carry out a field survey of the architectural characteristics of Yunshantun.

Walking into Yunshantun, which was built in the early Ming Dynasty, is shaded by ancient trees. It has preserved Tuen Mun, Tuenlou, and Tuen Wall, which are good at fortifications, as well as gatehouses and window rooms in Jiangnan architectural style, stepping on the smooth stone road. It seems to have the feeling of "moving to the sky and dreaming south of the Yangtze River".

There are less than a hundred people left in Yunshantun where thousands of people live, making this village hidden in the depths of the mountain look extraordinarily quiet.

In 2012, Yue Jian discovered that the uninhabited old house in the village was dilapidated by wind and rain all the year round during filming in Yunshantun, and the idea of ​​restoring the old building was born.

The picture shows volunteers participating in the restoration of old houses.

“At that time, I made a special visit to Professor Ruan Yisan, the Guardian of the Ancient City, hoping to find a way for urbanites to intervene in the countryside to repair old buildings.” Yue Jian said that with the help of Professor Ruan Yisan, he not only went to France to participate in the repair of the castle, but also initiated Set up the Tunpu work camp.

"Why do you want to repair the old house?" "What is the purpose of repairing?"... At the beginning of the work camp, Yuejian was often asked these questions by local villagers.

The answer he gave was: I want future generations to know what the place where grandparents lived before and remember homesickness.

The picture shows foreign volunteers doing woodwork and participating in the restoration of old houses.

As the fourth heritage conservation volunteer work camp in China, the first residential building restored by the Tunpu work camp is the century-old Huang’s courtyard. At that time, not only more than 20 Chinese and French volunteers participated in the restoration, but also local craftsmen were invited to participate. in.

The picture shows the old house restored by the Yunshantun Work Camp.

Discuss design schemes, build stone walls, lay slates... Chinese and French volunteers and local craftsmen worked together to make the once dilapidated Huang’s courtyard light and transparent. The first floor was restored as a research classroom and workshop, and the second floor was decorated as Exhibition hall and exchange room.

"In the restoration process, we adhere to the concept of repairing the old as before, hoping to reflect the architectural memory of different historical periods." Yuejian said that the work camp repaired 3 houses in Yunshantun, and also helped local villagers carry out house repairs.

The picture shows the villagers returning to Yunshantun to repair their old houses and open a cafe.

The "Chuan Pai Pavilion" displayed in the museum is a waste wood transported by Yuejian from Yunshantun and built by local craftsmen on site at the museum.

The 266 photos, 7 house models and 45 traditional carpenter tools at the exhibition site not only showcase the "repair" skills of old houses, but also evoke the memories of many people.

"We are actually making a model, and we hope that the villagers can protect and use the old houses spontaneously." Yue Jian said that many villagers who moved out of Yunshantun returned to the mountains to repair their old houses on their own and even open them. Set up homestays, cafes...

Over the past eight years, 257 volunteers from France, the United Kingdom, Norway and other countries have carried out restoration and training on 9 historical buildings in Guizhou.

During the period, the volunteers not only worshipped local craftsmen as their teachers, but also learned local intangible cultural heritage and held village concerts to “integrate” with local villagers.

The picture shows the exhibition on display at the Guizhou Provincial Museum.