The US Bureau of African Affairs, part of the country's foreign ministry, appealed this weekend to Eritrean President Isaias Afwerki to release eleven prisoners arrested in 2001, including the Swedish-Eritrean journalist Dawit Isaak. 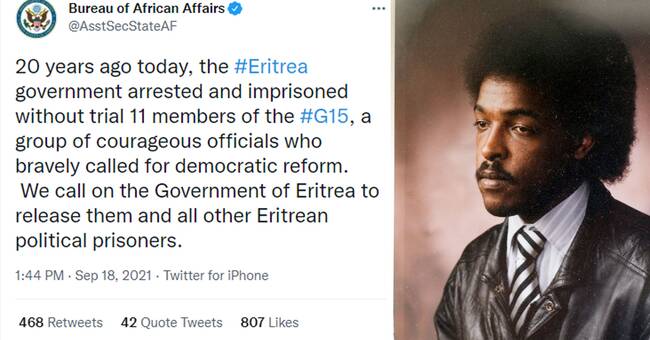 The US Embassy in the Eritrean capital Asmara noted this weekend that it was 20 years ago that eleven Eritrean citizens were arrested after writing a letter to the Eritrean government and demanding political reforms.

"We respectfully and humbly ask that President Isaias, in connection with the celebration of the Feast of Meskel, release G15 prisoners and political prisoners in Eritrea, including the Swedish-Eritrean journalist Dawit Isaak, who was arrested and detained without trial in 2001 for reporting for the newspaper Setit ”, the embassy writes on Facebook.

The State Department writes on Twitter that the United States is urging the Eritrean government to release all political prisoners.

Meskel is celebrated on September 27 and is a Christian holiday celebrated by Orthodox in Ethiopia and Eritrea.

On September 23 this year, Dawit Isaak has been imprisoned for 20 years.