The Liaison Office of the Central Committee of Hong Kong: The successful holding of the election of the Election Committee is an important step in the development of Hong Kong’s characteristic democracy 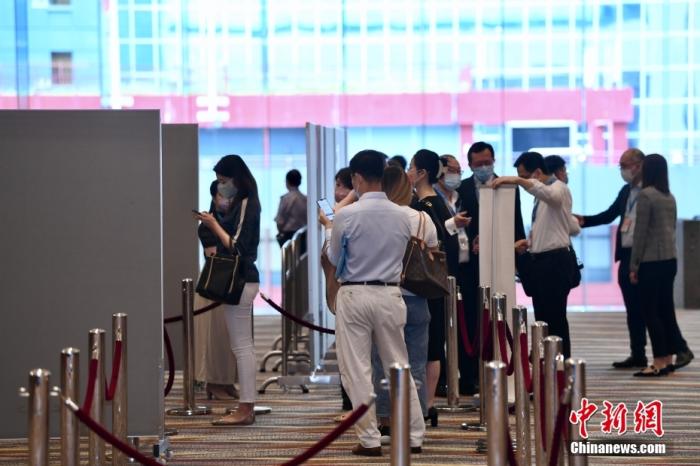 For this, we extend our warm congratulations!

This election implemented the principle of "patriots ruling Hong Kong" and demonstrated the progressive superiority of the new election system. It is an important step on the path of democratic development with Hong Kong characteristics.

The picture shows Hong Kong voters lining up to vote.

The statement pointed out that the election of the Election Committee is the first important election since the situation in Hong Kong has achieved a major turn from chaos and governance.

The SAR government organizes elections strictly in accordance with the law. From voter registration, registration for elections, campaigning, to voter voting and vote counting, the entire election process is fair, open and just.

Participants put forward campaign platforms for reflecting the demands of the industry, solving Hong Kong’s economic and people’s livelihood issues, promoting social progress, and integrating into the overall development of the country. They had in-depth exchanges and interactions with the general public, demonstrating their responsibility to speak up for voters and advocate for Hong Kong.

Registered voters actively participate in and exercise their right to vote in accordance with the law, express the wishes of the industry and citizens with their ballots, and demonstrate their recognition and support for the new electoral system.

The statement pointed out that the newly-elected members of the Election Committee come from all walks of life in Hong Kong society and are broadly representative, reflecting the advantages of the new electoral system for balanced participation.

Among them are representatives of the Hong Kong National People’s Congress and CPPCC members, members of the Hong Kong Legislative Council, academicians of the two academies, university presidents, business leaders, professionals, and ordinary workers such as fishermen, farmers, drivers, tour guides, and workers. Representatives of the Fight Crime Committee, grassroots organizations, small and medium-sized enterprises, and mainland Hong Kong people's groups entered the election committee for the first time, fully demonstrating that the new election system can not only safeguard the national interests and the overall interests of Hong Kong, but also effectively represent the interests of all sectors of society.

According to polls, "nearly 70% of the people believe that the elected committee can speak for the industry and Hong Kong." Public opinion believes that "elections encourage different stakeholders to participate, which can reflect diverse opinions and take into account overall interests."

We are fully confident that the new election committee will fulfill its duties and missions and that the Hong Kong Special Administrative Region will start a new phase of good governance and good governance.

The statement emphasized that, as the first successful practice of the new electoral system, the election of the Election Committee established the political rules of "patriots ruling Hong Kong, and those who oppose China's chaos in Hong Kong get out of the game." The process of building a rational election culture has not only allowed for a solid step forward in democratic politics, but also made good governance and governance truly possible. It is hoped that Hong Kong will take this as a starting point and gradually return to a normal society. Under the protection of the new electoral system, it will help the righteous and eliminate evil, select the talents, and press the development "fast forward button" together to create a better tomorrow. (over)