This weekend, the Moon will be in conjunction with Jupiter and Saturn

Let's take advantage of the first hours of the night, this weekend, to observe a beautiful conjunction of Jupiter and Saturn with the crescent Moon. Venus will also shine ... 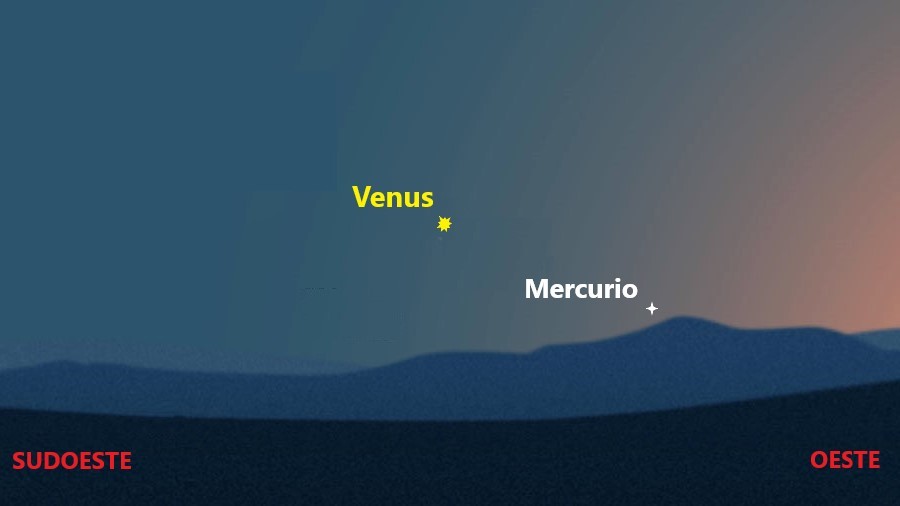 Let's take advantage of the first hours of the night, this weekend, to observe a beautiful conjunction of Jupiter and Saturn with the crescent Moon.

Venus will also shine splendidly at twilight to the west.

Jupiter is still on the border between the constellations Aquarius and Capricorn, and is now the brightest star in the sky after the Moon and Venus (which, as we describe below, shines in the west after sunset).

To the right of Jupiter, as we look at the sky, we can also see Saturn, much weaker and redder.

Both gas giants are observable in the southeast after twilight, they gain height as night progresses and they hide at dawn in the west. In the middle of the night, they are at about 50 degrees elevation in unbeatable conditions for observation from Spain. In astronomical terms: Jupiter's magnitude is now -2.8 and its apparent diameter measures 48 arc seconds (about 40 times less than that of the full moon). Saturn's magnitude is now 0.4 and its apparent diameter is 18 arc seconds. This is equivalent to saying that Jupiter looks about 19 times brighter and has an apparent size 2.7 times that of Saturn.

This weekend, the gibbous Moon, attends the appointment with the giant planets thus offering us a beautiful conjunction.

We can observe this scene very well since the Sun goes down and there is enough darkness for the planets to contrast against the sky background.

On Friday the 17th we could see our satellite between the two planets, although a little lower above the horizon, while on the 18th and 19th the Moon is already more and more to the left of Jupiter.

The gas giant is still close to its opposition, a position it passed through a month ago.

This means that Jupiter, the Earth and the Sun are still located almost on the same straight line.

In this configuration it is in a position close to our planet, but even so, its distance exceeds 600 million kilometers.

Saturn is now more than twice as far away, 1.39 billion kilometers away from Earth.

There are now two other planets that are visible to the naked eye.

Venus can be seen shining splendidly to the west at twilight.

These days it is about 150 million kilometers away.

This is 4 times closer than Jupiter, which makes it possible that, despite its much smaller size, Venus appears 2.3 times brighter than the giant planet.

Venus and Mercury at twilight on the 19Stellarium / RB

The elusive Mercury can be seen this weekend also in the sunsets, but close to the Sun and very low above the horizon, which makes its observation require much more attention than that of Venus.

Mars is now close to the direction of the Sun and is not observable.

We will have to wait until December to see it appear, at very low elevations, at dawn in the southeast.

We are now very close to the equinox, it is the period of the year in which the days shorten the fastest.

Every day that passes, the night gains 3 minutes a day.

As long as the sky remains clear of clouds, it is a wonderful time to follow the planets as they eagerly pass among the stars, feel in contact with nature and admire the magic of the sublime sky.