Pilgrimage between volcanoes: this is the Camino de Santiago in the Canary Islands

In the municipality of Gáldar, in the northwest of Gran Canaria, life passes at the pace set by its inhabitants. Strolling through its streets is to breathe the history of what one day was 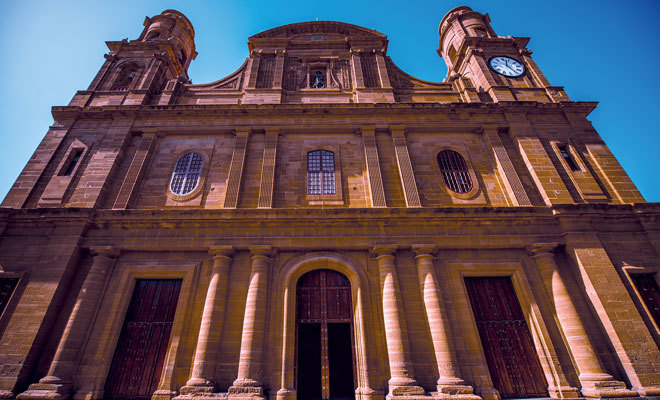 In the municipality of Gáldar, in the northwest of Gran Canaria, life passes at the pace set by its inhabitants. Strolling through its streets is to breathe the history of what was once the capital of the island, seat of the Guanartemes, the

From the museum and archaeological park of Cueva Pintada to Calle de Capitán Quesada, known as

, the commercial and vital epicenter of the historic center. And in between,

It would be necessary to talk about the main jewel of the place, the temple of

It is one of the largest religious buildings in the Canary Islands, with three naves and 15 chapels, where part of

related to the Apostle Santiago

Not in vain, it is the Canarian point where the saint is worshiped.

Between cheese shops and wineries

Looking back, in the pre-Hispanic settlement of Agáldar, today the Royal City of

Bishop Juan de Frías officiated mass, for the first time, on the Lord Santiago's day in 1482, before the end of the

That of Agáldar would therefore be the first Jacobean dedication established outside the Peninsula, a precursor in addition to those established later in America.

On the occasion of the Jacobean Holy Year 21-22 (due to the pandemic it has been decided that it should last two years), the visit to Gáldar is more interesting than ever, since it allows you to discover the

, unique in the world.

It is in charge of joining the south of the island, where the Jacobean church of

The Way does not live by religion alone. This route also allows you to discover the

of Gran Canaria, as well as the gastronomy and the historical and ethnographic heritage. "

The Camino de Santiago between volcanoes

is a State project and, therefore, a community project that encompasses all the islands", explains the general director of Tourism of the Government of the Canary Islands, Ciprián Rivas. He continues: "Of course, people will have to go through Gran Canaria because it is the place where

the two holy gates are,

that is, Tunte and Gáldar." The idea, he adds, is that the Way "backbone the territory, since around the roads there are

One of the key points of the Canarian Way are the Maspalomas dunes to the south, the beginning of the 66 kilometers that await the walker.

The route continues in the

known as the Valley of a thousand palms, and the

, the largest aboriginal cemetery on the island, until reaching Tunte, where the aforementioned Jacobean temple of San Bartolomé is located. .

According to oral tradition, this section of the road, from Maspalomas to Tunte, was started by some Galician sailors in the 15th century with an image of Santiago to build a hermitage in

the Heights of Tirajana

as thanks for having overcome a sea storm.

Leaving Tunte behind, the second section of the road starts at Cruz de Tejeda, where the peaks of Gran Canaria, baptized by

as the "petrified storm"

and the Gran Canaria Biosphere Reserve, which occupies 46% of the island's surface area.

View of Roque Nublo with El Teide in the background SHUTTERSTOCK

as its emblem, you have to look at the Ventana del Nublo, which has the best panoramic views of the island, and walk through the pine forests of the

until you reach Degollada Becerra, a viewpoint with views of

, the undisputed symbol of the island.

The final route, which joins the Cruz de Tejeda with Gáldar, descends between volcanoes,

It passes through the

de Gáldar until reaching the first capital of Gran Canaria, Agáldar, in its aboriginal name, the mountain town.

Summer campaignThe extension of the summer: the sector wants to extend the season until October to wait for the British tourist

The best plans in nature without leaving the Peninsula