Special "reunion" before the Mid-Autumn Festival

China News Service, Taizhou, September 17 (Fan Yubin and Wang Hanxue) 66 years ago, when he left home, the young man had a high ambition; 66 years later, his family still remembered the promise made by the young man. Photographed by the Sweeping Group of the Relatives of Martyrs from Jurong, Jiangsu Province   The reporter was informed on the 17th that six soldiers from Jurong, Jiangsu were ki 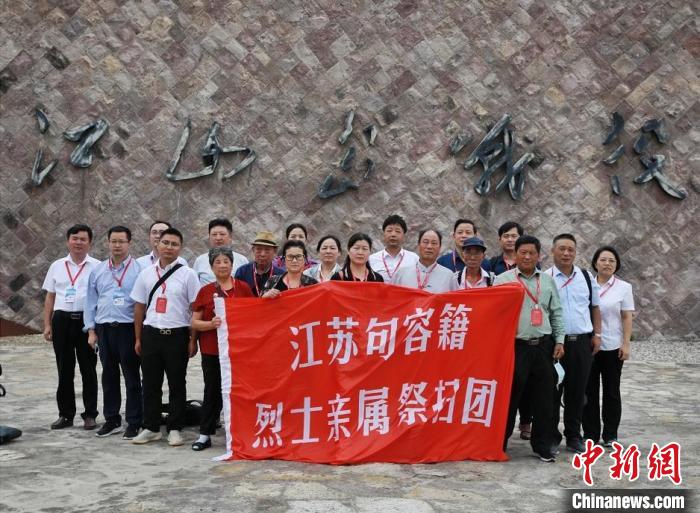 China News Service, Taizhou, September 17 (Fan Yubin and Wang Hanxue) 66 years ago, when he left home, the young man had a high ambition; 66 years later, his family still remembered the promise made by the young man.

Photographed by the Sweeping Group of the Relatives of Martyrs from Jurong, Jiangsu Province

The reporter was informed on the 17th that six soldiers from Jurong, Jiangsu were killed in the Battle of Yijiangshan Island through the search of the Liberation Yijiangshan Island Martyrs Cemetery. They were Wang Gaochen, Zhuang Liyin, Zhang Jingui, Chen Daihua, Guo Wenming, and Sun Zhaohong. At present, there are six martyrs. All of the survivors were found.

"Second uncle, grandpa always talks about going to see you on Yijiangshan Island"

"My grandfather always thought that his son was buried on Yijiangshan Island and he went to the island to worship twice." Wang Mingsheng, the nephew of the martyr Wang Gaochen, said. Very pleasantly surprised, because the family has never forgotten the second uncle Wang Gaochen.

"In normal life, I educate my children to be proud of their second uncle, to always remember that they are a party member, to inherit the spirit of a country, and to remember that the dedication of revolutionary martyrs can make the motherland today." Wang Mingsheng introduced, When Wang Gaochen died, he was unmarried and had no children, but his whole family will remember Wang Gaochen.

I have a wish to see where my father fought

"Dad, we came to see you..." Zhang Hongbao and his wife Liu Xingfeng burst into tears in front of the tomb of the martyr Zhang Jingui. This is the third time they have come to Jiefangyijiangshan Island Martyrs Cemetery to visit their father.

"When we came to worship for the first time, we had to go to Changzhou, then Shanghai, Hangzhou, and Taizhou when we started from Jurong. It was Panshan Highway." Zhang Hongbao said in 1987, due to the inconvenient transportation from Jurong to Taizhou. He and his wife changed various modes of transportation and spent three days and three nights on the road.

Zhang Hongbao crying in front of his father's grave. Photo by Shui Shui

"At that time, there was a thought, to come here to see my father and see what his father looks like." Zhang Hongbao said.

Before the death of the martyr Zhang Jingui, his son Zhang Hongbao was only 6 years old. The father in his memory had nothing but a photo and military medal.

Zhang Hongbao is 73 years old this year, but he still has a wish to visit Yijiangshan Island and the place where his father fought.

"My father is a hero. I miss him in my heart. I want to go up and have a look and see my father." Zhang Hongbao said.

Photo of the martyr Zhang Jingui when he was young

"Walking all over the memorial halls of Jiangsu, just to find you"

The martyr Chen Daihua enlisted in the army in 1951. He was only 26 years old when he died and had no children.

"Since I was young, my mother told me the story of my uncle, saying that my uncle was a martyr." Xiong Yanghua said. His mother told him that when the country was conscripting soldiers, his uncle, as the only male in the family, volunteered to serve as a soldier, and his grandmother was also very supportive. he.

"After the victory in the War of Resist U.S. Aid and Aid Korea, my uncle wrote a letter to the family saying that he would go to war. When the war was won, he invited his family to visit the army, but he never came back." Xiong Yanghua said.

Chen Daihua died, and his mother died shortly after being sick. Xiong Yanghua’s mother Chen Daiying was only in her teens. She only knew that her brother died in the battle, but what exactly was the battle and when, She was not quite sure when she was young.

Xiong Yanghua stroked his uncle's tombstone for his mother. Photo by Shui Shui

"We have traveled all over Jiangsu memorial halls large and small, and have been looking for the name Chen Daihua. My mother always said that as long as she is there, she will find her brother." Xiong Yanghua said.

"My brother is very good to me. I don't allow me to do any work at home. If you go to see your uncle in Jiaojiang, you must kiss my uncle for me and take more pictures." Chen Daiying was inconvenient to come to the scene because of the inconvenience, and before going out. She repeatedly told her daughter that she must talk to her uncle more.

"Brother, I brought you the soil of my hometown." Photo by Shui Shui

"Brother, I brought you the soil of my hometown"

"When he left that year, we beat the gongs and drums to send him off. When we came back, we only had the martyrs' certificates, shoes, and clothes." Looking at the letter he wrote back in the army, the picture of sending his brother to the army 66 years ago seems to be still in sight.

Zhuang Lijin is 77 years old this year. He doesn't know if he still has a chance to come to the Martyrs Cemetery of Jiefang Yijiangshan Island. Today, Zhuang Lijin brought the soil in front of his hometown to his brother Zhuang Liyin.

He said: "Brother, I will build some dirt for you, you must remember the way home..."

Li Linqing, director of the Jiefangyijiangshan Island Martyrs Cemetery Management Center, said: “Due to the incomplete registration information and the undeveloped transportation at the time, many relatives of martyrs outside Zhejiang Province did not know the exact burial place of the martyrs. For the past ten years, we have been serving the martyrs. Looking for relatives, we have helped more than 100 martyrs find their relatives."

Li Linqing said that after the release of the information on the 20 martyrs this year, he has successfully contacted the descendants of 13 martyrs.

The search for relatives continues. Next, the Liberation Yijiangshan Island Martyrs Cemetery will continue to collect and release the list of martyrs without relatives, paving the way for more martyrs to "home".