In Spain, the price of electricity continues to skyrocket, reaching a new record this Saturday of 187.18 euros per megawatt / hour. Either a higher cost than in Germany. The socialist government ... 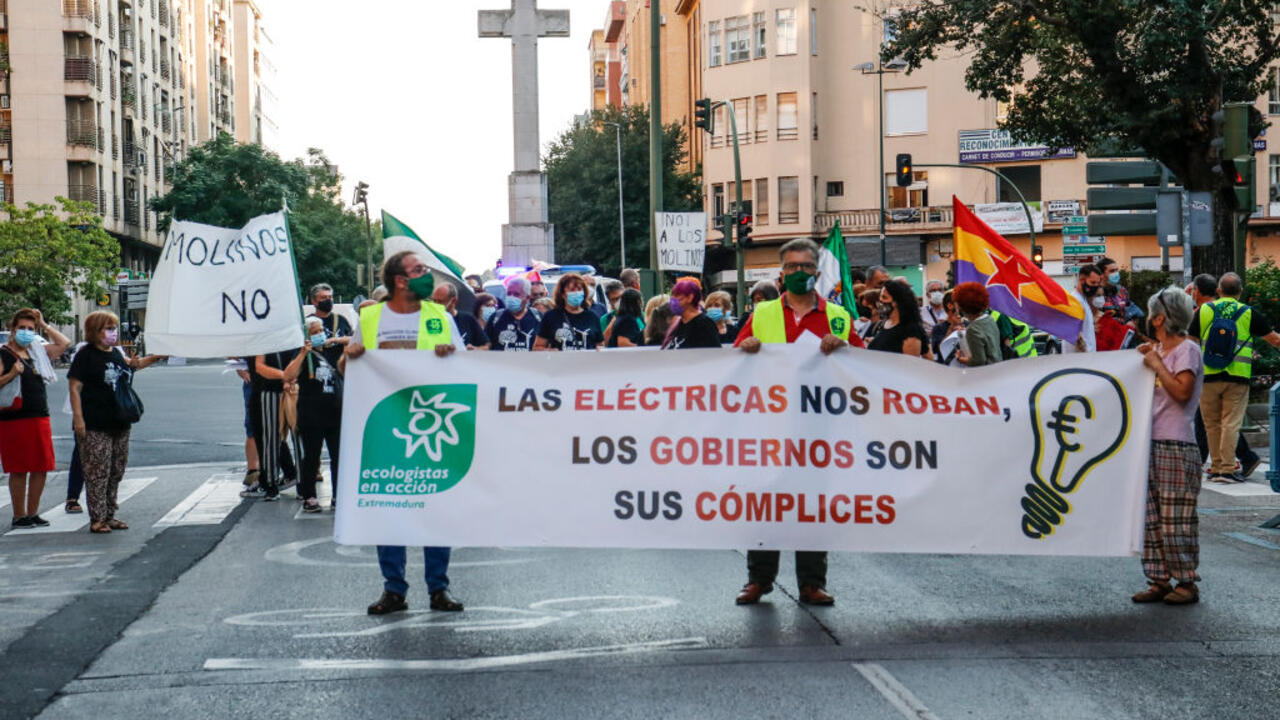 Demonstration on September 17, 2021 in Caceres, Spain, to protest against the rise in electricity prices and demand from the government and the main electricity companies to lower their prices.

In Spain, the price of electricity continues to skyrocket, reaching a new record this Saturday of 187.18 euros per megawatt / hour.

Either a higher cost than in Germany.

The socialist government has just adopted, in the Council of Ministers, a shock plan to lower the bill of users whose discontent continues to swell.

From our correspondent in Madrid,

Monica runs a small grocery store in a popular area of ​​Madrid. Only three out of six neon lights illuminate the store. Like the majority of traders, it is looking to cut costs to cope with a 34.5% increase since this summer. “

Last month my bill almost doubled. Normally I pay between 170 and 190 euros per month, and there I paid 270 euros. I have a lot of electrical appliances

: the display, the two freezers and the cash register, it's madness, we will have to go back to the candle and the manual scale, everything must be readjusted

The cold snap last winter and this summer with the heatwave boosted demand, which explains the increase in prices.

Spain suffers from its dependence on the price of gas.

And when it also reaches record prices, all of the country's energy is revised upwards.

Faced with this surge, the Spanish electricity companies have changed their tariffs, establishing time fringes, where consumption is cheaper.

For Ana Isabel, mother of a family, the whole family organization is affected. “

Yes, I have changed my habits, I get up at 7 am and the first thing I do is put the washing machine on so that I am in the cheapest hourly band. And television, well, we watch it less. Electricity is a basic good, it is not a luxury. Me, I have to be able to cook and I have ceramic hobs, and that consumes a lot. I pay around 30 to 40 euros more per month, which is a lot for me.

Behind her counter, Monica does not hide her concern. In his street, several traders had to close their businesses. After the pandemic, the rise in electricity is the final blow. “

For small businesses, it is very difficult to meet new costs. I hope that we will resist. Otherwise, we'll have to go to President Sanchez's door to ask him for money.

The government's shock plan provides for a temporary reduction in the special tax on electricity, which comes on top of the drop in VAT at the end of July from 21 to 10%.

Another flagship measure, which has not been to the liking of the large electricity companies, which have seen their shares fall on the stock market, is to limit until next March the extraordinary profits garnered by the companies, which would allow the State recover 2.6 billion euros and reduce the Spanish electricity bill by 22%.