China News Service, Beijing, September 17 (Reporter Ying Ni) After 70 years, Dunhuang reunited with the Forbidden City-on the 17th, "Dun Xing Guo Yuan: Forbidden City Dunhuang Special Exhibition" appeared in the Wumen Exhibition Hall. What kind of sparks these two top museums will collide with is quite exciting.   The exhibition is divided into three units: "The Silk Road, the World", "The Worl 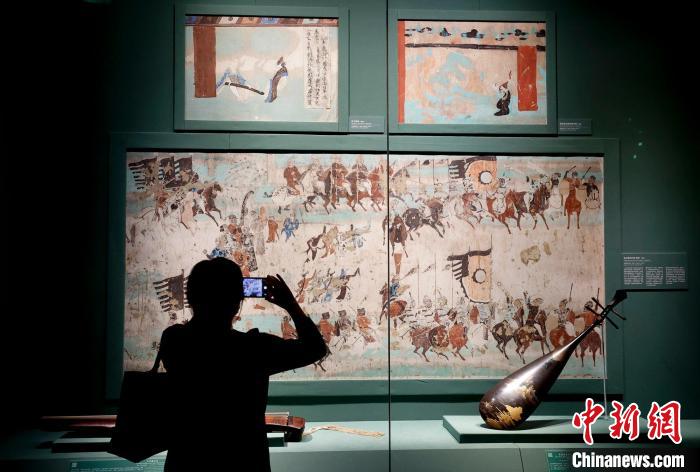 What kind of sparks these two top museums will collide with is quite exciting.

The exhibition is divided into three units: "The Silk Road, the World", "The World in Vientiane," and "Protection and Inheritance". A total of 188 cultural relics from the Gansu section of the Silk Road and the Palace Museum are on display.

The exhibits also include 35 copies of Dunhuang murals, 6 reproductions of colored sculptures, more than 70 copies of high-fidelity digital murals, and more than 20 auxiliary exhibits such as imitation canopies and pagodas.

A seemingly inconspicuous Han bamboo slip recorded that during the Han Dynasty, the station used 18 dan millets, which is equivalent to about 486 jin of grain, to feed the horses of the Wusun delegation. The Wusun envoy group is very large, and this is not recorded in the great history, but it is really true. A certain moment that happened on the Silk Road, it was countless moments, gathered into a magnificent history.

There are 25 pieces (sets) of similar Hanjian slips on display.

A small piece of "Dunhuang" bamboo slips from the ink book, collected at Qianqiu Sui on the Great Wall of Han Dynasty in Dunhuang in the 1980s, has a strong Han Li script that has witnessed two thousand years of time.

A wood-carved eight-armed Guanyin remnant from the Northern Song Dynasty, carved out of poplar wood as a whole.

From the analysis of the remaining arms by the cultural relics experts, it should be a statue of Guanyin with eight arms and eleven faces.

There are many statues of Guanyin with eight arms and eleven faces in the Dunhuang murals, but the sculptures are rare, and this afterimage that survived a catastrophe is particularly precious.

As one of the representative works of the colored sculpture Bodhisattva of the Tang Dynasty in Mogao Grottoes, the bodhisattva standing in Grotto 159 has a slightly S-shaped body, beautiful and exquisite dresses, and has a silky texture.

To some extent, the exquisite costumes are the reflection of the secular and beautiful costumes, showing the prosperous and prosperous social atmosphere of the Tang Dynasty.

On the exhibition wall, the audience can see the most classic and representative pictures of Dunhuang murals from the Northern Dynasty to the Yuan Dynasty.

For example, the familiar "Nine-Colored Deer" story, the most common theme of "sacrificing one's body and feeding a tiger" in Buddhist art, and various pictures of wars, many of these murals are not only benchmark works in the history of Chinese art, but also representative of classic inheritance. work.

On the booth, the sculpture image of the Hu Teng dance bronze figurines from the Tang Dynasty was very similar to the Hu Teng dance scene described in the Tang poems. The shape was vivid and reproduced Hu Teng'er's bold and flying dancing posture. Behind it and a group of pottery musical figurines, It is the music and dance of a group of immortals and their bands in the 220 pharmacist scripture picture.

In the silence, as if to hear the sound of heaven coming through time and space, there is still a lingering sound...

The architectural paintings in the Western Pure Land Transformation murals in Cave 3 of Yulin Grottoes can be regarded as masterpieces of the Dunhuang murals. Such a group of murals fill in the imperial ancestral halls, temples, pavilions, courtyards, pavilions, etc., and fill the Chinese architecture. The many gaps in art history research reflect the etiquette system, religious ideas, and aesthetic interest.

In such a grand exhibition, the reporter also saw a few humble pottery bowls on the spot. The bowls were red, yellow, or stone blue. These were the color mixing bowls used by ancient painters.

Lou Jie, a research librarian and exhibition curator of the Art Research Department of the Dunhuang Academy, said that ancient Chinese craftsmen poured their own life emotions and long-cherished wishes into them, not only making the utensils conform to the natural way, but also demonstrating the ingenuity of the craftsmanship in the art of creation. You can see the beauty of the heavens and the earth, and you can also see the vitality of all things, and perceive the continuous and endless inheritance.

"These color mixing bowls that have been deposited over the years are full of temperature, allowing the audience to feel the'artisan spirit' closely."

It is particularly worth mentioning that in the temporary exhibition hall under the West Horse Road, Wumen, three replica caves of Dunhuang Mogao Grottoes 285, 220 and 320 are also exhibited at the same time. They are the Western Wei Dynasty, the Early Tang Dynasty and the Prosperous Tang Dynasty respectively in chronological order.

Among them, Cave 285 is the earliest cave with an exact date in the Dunhuang Grottoes. The two "Dances" and its bands in the Pharmacist Change of Cave 220 are valuable materials for studying music and dance. Cave 320 is one of the representative caves in the prosperous Tang Dynasty. Dingzaojing is rich in color and preserved fresh. The northern murals are elegant and light in color. They are one of the themes of similar classics in the prosperous Tang Dynasty.

During the exhibition, the Palace Museum and Dunhuang Research Institute will launch special exhibition thematic columns in the "Digital Forbidden City" and "Dunhuang Dunhuang" mini programs. The exhibition will be discussed through the official website, official Weibo, official WeChat, official video account and other platforms. Various forms of dissemination through channels.

It is reported that the exhibition will last until November 18.