International press review - In the spotlight: delivery of American submarines to Australia, the wrath of Beijing and Paris

In the headlines: delivery of American submarines to Australia, the wrath of Beijing and Paris Audio 05:10 File photo taken on May 2, 2018 shows French President Emmanuel Macron (2nd left) and Australian Prime Minister Malcolm Turnbull (2nd light blue suit) standing on the deck of HMAS Waller, a Collins-class submarine operated by the Royal Australian Navy, at Garden Island in Sydney. (Illustrat 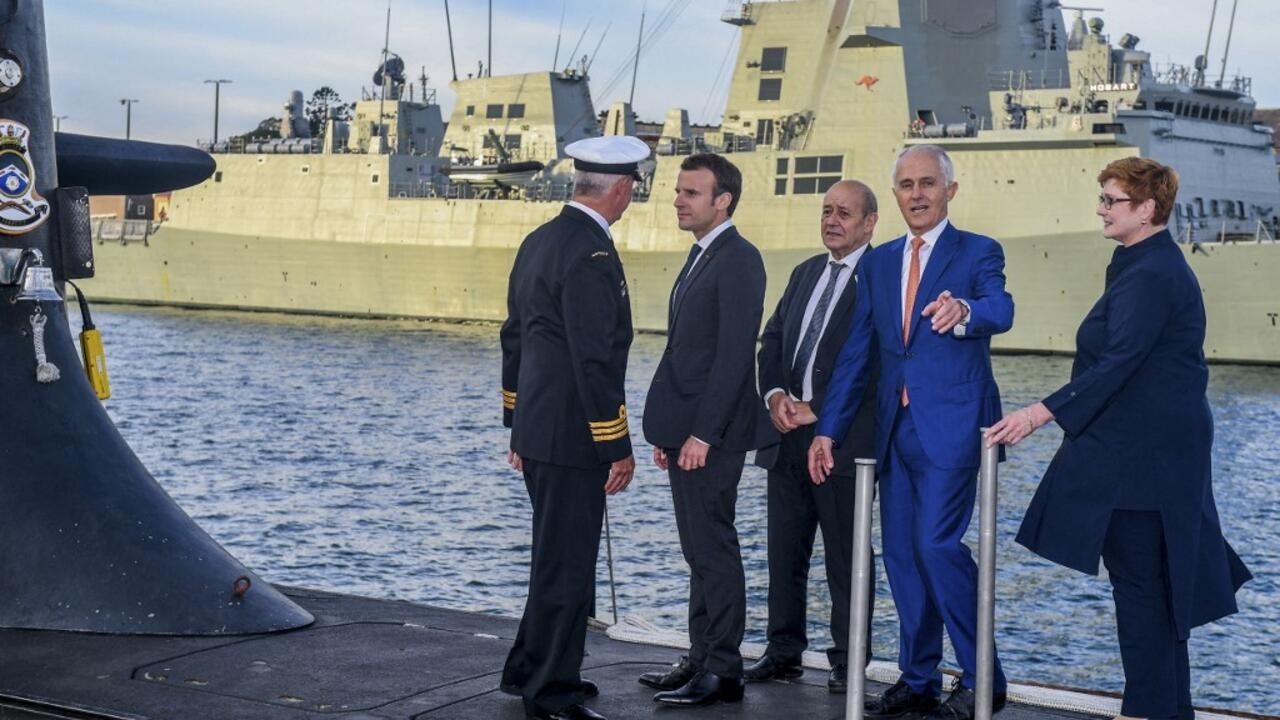 In the headlines: delivery of American submarines to Australia, the wrath of Beijing and Paris

By strengthening their alliances to "

", the trio of American, British and Australian allies made a collateral victim: France, explains the

contract of the century at 56 billion euros

”, for the sale of submarines to Australia, “torpedoed” for the benefit of this new Indo-Pacific alliance.

Because the cornerstone of this "

the sharing of advanced technologies between the three allies, and the delivery of nuclear-powered submarines

", specifies for its part the

This new strategic partnership has taken shape in secret since Biden took office,

” explains the American daily, and its launch “

China, like France, seems to have been somewhat taken aback by this announcement.

, the Hong Kong newspaper which also gives the floor to a Chinese analyst for whom "

China is going. undoubtedly steer clear of an intransigent attitude and will certainly retaliate

whole question is what kind of response it will be

," according to a forthcoming book, continues to make a lot of noise, reports the

" between Democrats and Republicans.

A behavior which also horrifies the columnist of

A reshuffle described as "

" by almost all of the British press. "

, sees in it the will of Boris Johnson to "

mark his authority after 18 months of rebellions, about-face and blunders

A reshuffle also highly commented on in the European press. "

Boris Johnson is looking for a new lease of life

" after the pandemic, estimates

Exit therefore the ministers of Education, Justice and Housing, underlines

Dominic Raab is expelled from foreign affairs, demoted after the chaotic management of the withdrawal from Afghanistan,

For its part, the British press believes that "

welcomes the arrival of Liz Truss in

first woman to hold this position

" after two years as head of the Department of International Trade.

The first space tourists have arrived in orbit

" aboard a SpaceX spacecraft unanimously described as "

first mission in space without any professional astronaut on board,

a billionaire, a computer engineer, a medical assistant and a college teacher

who welcomes the opening to "the

who will circumnavigate the earth about fifteen times a day

as if suspended in the middle of space