Earthquake of magnitude 6.0 in Luxian County, Sichuan: All forces are rushing to assist and rescue work is being carried out urgently

China News Service, Chengdu, September 16 (Reporter Liu Zhongjun and Yue Yitong) At 4:33 on the 16th, a magnitude 6.0 earthquake occurred in Lu County, Luzhou City, Sichuan Province (29.2 degrees north latitude, 105.34 degrees east longitude) with a focal depth of 10 kilometers. The earthquake caused some houses to collapse. According to information from the Propaganda Department of the Luxian C 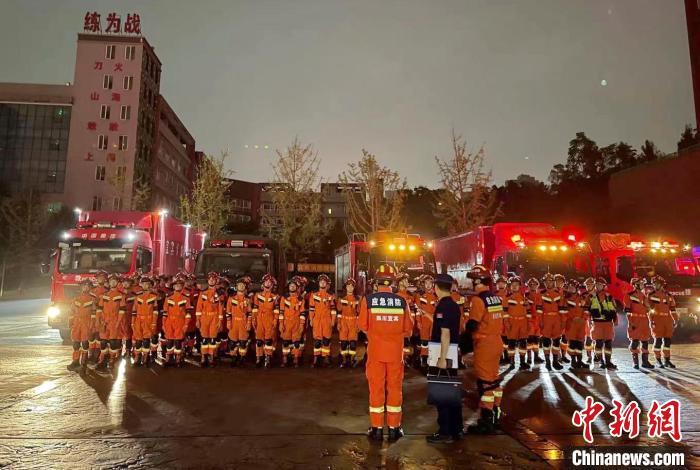 The earthquake caused some houses to collapse.

According to information from the Propaganda Department of the Luxian County Party Committee, as of 7:00 on the 16th, 2 people had been killed and 53 were injured, of which 3 were seriously injured.

After the earthquake, all parties quickly rushed to help, and relevant rescue work is being carried out urgently.

Up to now, the fire rescue team has received 19 rescue alarms, and rescue forces have arrived at the epicenter, carrying out rescue operations in Jiaming Town, Fuji Town, Yunding Town, and Yuchan Street.

After reconnaissance, some houses in the epicenter collapsed, and fire rescue forces carried out rescue operations on the spot. Nine trapped people have been rescued and 123 people have been evacuated.

In order to ensure the safety of passengers' lives and property and railway transportation, the railway department has quickly activated emergency plans, emergency blockade of relevant sections, and comprehensive inspection of line equipment.

Affected by this, the passing trains will be delayed to varying degrees.

After the earthquake, the Sichuan Provincial Department of Transportation immediately initiated the earthquake's secondary response.

After investigation, the expressway to Luzhou and the domestic expressway are normal.

The expressway has been opened for emergency and rescue vehicles to pass free and fast; on ordinary roads, except for G321 Luxi River Bridge in Luxian County, it was found that the expansion joint comb plate was cracked (it has been closed for traffic). The landslides have been cleared and will not affect traffic.

In terms of road transportation, Luxian Passenger Transport Station found cracks in the inner wall of the station.

Luzhou has prepared 100 passenger and cargo emergency capacity, and the Transportation Management Bureau of the Department intends to dispatch 20 passenger and cargo emergency capacity nearby, ready to support at any time; on the water, a comprehensive investigation of the city’s port enterprises, water transportation enterprises and water projects under construction has been carried out , Sharing information with Luzhou Maritime Affairs, Yangtze River Luzhou Channel Branch, etc., has not yet received disaster information preparation; in terms of transportation projects under construction, Luzhou-Yongchuan and Gulin-Jinsha highway projects have no casualties, no structure and Equipment such as bridge erector collapsed.

After dawn, check the structure for detailed damage.

The Sichuan Forest Fire Fighting Corps also launched an emergency rescue plan immediately after the earthquake. It immediately assembled a total of 100 people from the front finger and the special service team as the first echelon. At 5 o'clock on the 16th, they dispatched to the epicenter area of ​​Luxian County, Luzhou City for emergency assistance.

At about 5 o'clock that day, the Sichuan Earthquake Administration's field team rushed to the earthquake-stricken area of ​​Lu County with a magnitude of 6.0. The Zigong Earthquake Monitoring Center Station and the Sichuan Earthquake Prevention and Control Center working group that is working locally, as well as Zigong and Luzhou City earthquake prevention were assigned in the early stage. The disaster mitigation department gathered forces and quickly went to the disaster area to organize and carry out on-site work such as earthquake monitoring and tracking and disaster investigation.

At present, the earthquake has caused a total of 1 35 kV line and 5 10 kV lines in the local area to shut down, and power outages in 763 stations and more than 62,000 households.

After the earthquake, the State Grid Luzhou Power Supply Company immediately launched an emergency plan, quickly carried out special patrols after the earthquake, and carried out emergency repair work at the same time. Through methods such as switching operation methods, the scope of power outages was minimized and the power supply to the affected areas was restored as soon as possible.

As of 6 a.m., a total of 130 people and 26 emergency repair vehicles arrived at the scene to start rescue. One 35 kV line and two 10 kV lines have been restored to supply power for a total of 463 stations and 42,000 households.

As of 6 o'clock that day, aftershocks above M3.0 have not been recorded in the earthquake area.