Directly hitting the epicenter of the 6.0 magnitude earthquake in Luxian County, Sichuan: Villagers cooked together "Hundred Noodles" and rescued continuously in the rain 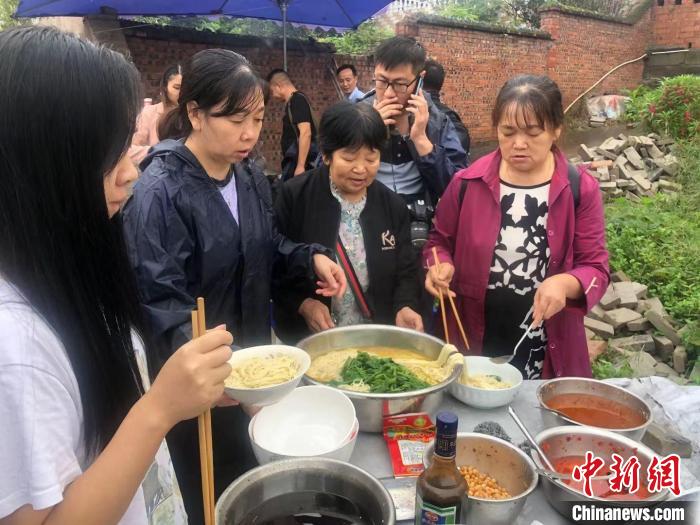 China News Service, Luzhou, September 16th, title: Directly hitting the epicenter of the 6.0 magnitude earthquake in Luxian County, Sichuan: Villagers cook together "Hundreds of Noodles" in the rain and rescue

On a road full of broken bricks in Fuji Town, Lu County, Luzhou City, Sichuan Province, a large pot was placed on a simple makeshift stove. Bai Shengsheng’s noodles were tumbling in the boiling water, steaming upwards, as if to penetrate the darkness and depression. Sky.

The villagers gathered around, standing or sitting with a bowl of noodles in their hands, and soothed their shocked hearts with red oil chili peppers.

This is what a reporter from China News Agency saw at the epicenter of the 6.0 magnitude earthquake in Luxian County at 13:00 on the 16th.

The villagers make their own "Hundred Noodles".

Although the environment is simple, these “Baijia Noodles” that you can eat right away are rich in flavors. More than a dozen kinds of smelt seeds such as beef, fatty intestines, cowpeas, and pickled pepper beef are provided by Li Linjun, the proprietor of the “heavy taste noodle restaurant” in the town. The villagers grow it themselves and are very fresh.

Tang Xinglian, a 71-year-old villager on crutches, was carrying a bowl of beef noodles with large bags of clothing beside her.

"During the earthquake, I was very scared. I didn't take anything. I pulled my two grandsons and ran out. I went home and grabbed the clothes. I was cold and hungry. I felt less flustered when I had noodles."

At 4:33 that day, a 6.0-magnitude earthquake disturbed the dreams of 1.07 million people in Luxian County, and countless people woke up from their sleep.

Simple noodle stall on the ruins.

The reporter saw in the epicenter of Fuji Town that the black cracks on the white walls on the side of the county road were very dazzling, and the roads were full of fallen bricks, branches and even collapsed telephone poles.

Light rain was floating in the sky, rescue vehicles were parked on the side of the road, and ambulances honked their whistle from time to time.

Rescue forces from all walks of life continue to enter Lu County, and about 6,500 rescue workers are carrying out disaster relief work in an orderly manner.

Xiong Fengfu, a policeman from the Lu County Public Security Bureau, dressed in raincoats and provided assistance to the evacuees at the gate of the county government.

After being awakened by the earthquake, he immediately went to work and has been busy until now.

"We are mainly investigating hidden safety hazards to ensure that the rescue road is unblocked." After wiping the rain off his face, he again began to answer people's questions.

"They worked so hard. I arrived at 6 o'clock and the rescuers arrived earlier than me." Huang Qingcai, a native of Luxian, rushed to his small supermarket near the county government early in the morning, and the goods on the shelves were shaken to the ground. .

Just after cleaning, he took another box of mineral water and gave it to the workers outside the store who were rushing to repair the wires in the rain.

"After being woken up by the earthquake, I felt like the sky was spinning and it was raining again. Many houses in the village collapsed and many villagers came to my house to take shelter."

A cordon was set up outside the Lu County Long Nao Pon Center Elementary School. Rows of blue tents were erected on the plastic playground in the school. Workers in protective clothing were killing them, and enthusiastic volunteers were distributing masks.

Medical workers shuttled back and forth in each tent, asking about the situation of the resettlement people. There are mobile charging vehicles in the resettlement points, and psychologists provide consulting services.

64-year-old Zhu Defang is taking care of his grandson on a lunch break in a tent. The slippers on his feet are the same when he was at home last night.

"I dare not go home, I am afraid that there will be aftershocks." Zhu Defang said that he and his grandson moved into the tent at 13:00 and ate meat porridge, potato shreds, and vinegared sea pepper. , Take a look at home.

With the orderly progress of the disaster relief work, most people have been resettled and breathed a sigh of relief in the sheltered tents, while many workers are still busy racing against time to "heal" the disaster-stricken towns.

Wang Zengping, a staff member of China Telecom, is directing the workers to use a crane to repair the line.

"Six communication poles collapsed on this small street of several hundred meters, and now the last one has been repaired."