In the spotlight: more blue! Audio 04:23 The police will have a "training center" on maintaining order, announced President Macron during his speech in Roubaix (illustrative image) AP - Ludovic Marin By: Frédéric Couteau Follow 8 mins Advertising This is Emmanuel Macron's credo: more police officers in the field, better training, a new outfit, a cap instead of the kepi, the widespread use of 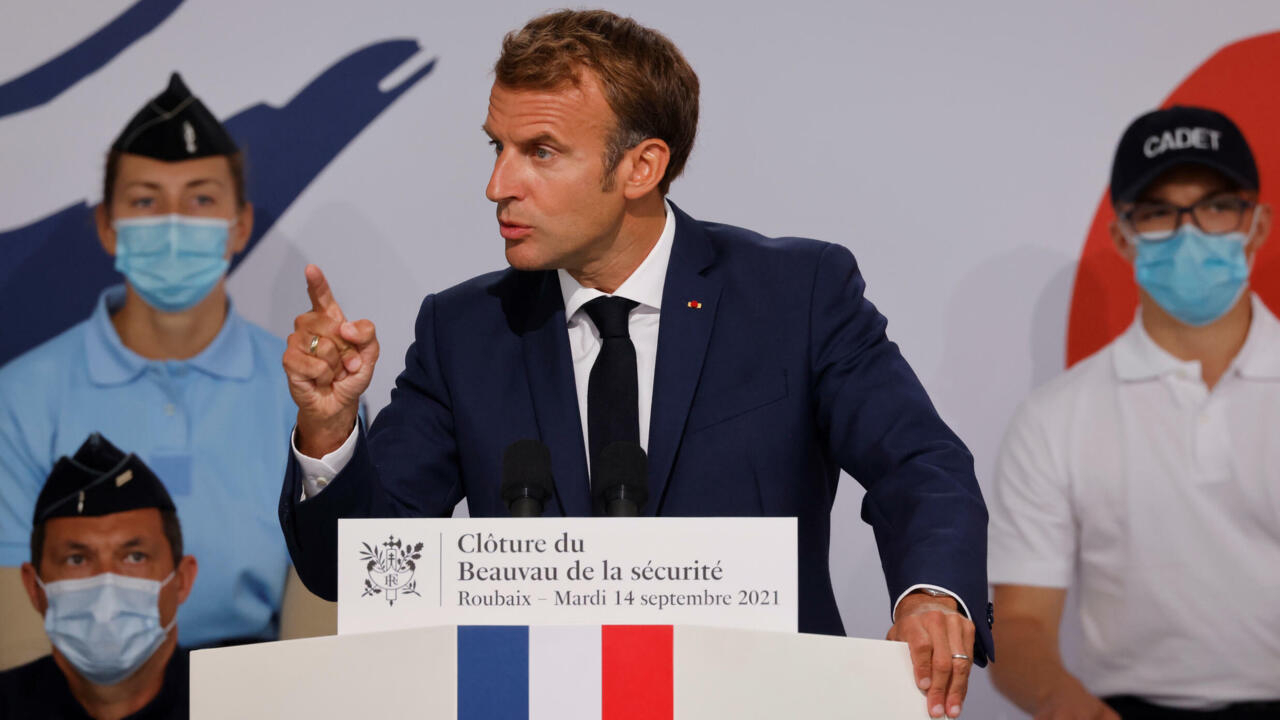 In the spotlight: more blue!

The police will have a "training center" on maintaining order, announced President Macron during his speech in Roubaix (illustrative image) AP - Ludovic Marin

This is Emmanuel Macron's credo: more police officers in the field, better training, a new outfit, a cap instead of the kepi, the widespread use of cameras, the rewriting of the criminal procedure, the possibility of file a complaint online and a new budget extension ...

The Head of State has put forward measures, more intended to respond to police malaise than to the mistrust of part of the population in the face of the institution

By also describing a "latent violence" that "the statistics do not say", he confirms his intention not to leave the field open to the right on the security aspect in the run-up to the presidential election.

By concluding, from Roubaix, seven months of work of the "Beauvau de la sécurité", Emmanuel Macron did not only intend to regain control of the security file. He also, on the occasion of a real Prévert-style inventory, ticked almost all the boxes of police demands, to the point of arousing the enthusiasm of the Alliance union, notoriously critical of the President of the Republic. "It is in line with our expectations, he responded to all our requests, we say banco". "It's true, it was a generally attractive speech," adds the Synergies officers' union. Announcements appreciated, therefore, "on condition, however, to be vigilant on [their] implementation, tempers the Independent Union of Police Commissioners. Because the promises only engage those who believe in them,especially during an election period ".

It is true that if "

with the presidential election in his sights

The president was already in the campaign,

the presidential election in seven short months is casting its shadow on the announcements of the President of the Republic. Because even if some of them are supposed to apply by the end of the five-year term, to improve the police condition and reform the institution, the measures unveiled yesterday have a scent of the countryside. […] Security, this sovereign theme, will be one of the keys to a possible second term. […] And we must hope,

, that, re-election of Macron or not, the train of reforms does not stay in the station.

[…] Restoring a healthy relationship between the population on the one hand, its police forces and its justice system on the other, is essential for all those who aspire to govern the country.

And "putting more blue in the street" cannot be enough if behind, the effort does not redouble to educate, train and really reduce unemployment.

To read also, this time in

In China, the disturbing Maoist drift of Xi Jinping

, points out the newspaper,

which had presided over the collectivization of land in the 1950s. Seeing the number of billionaires soar and inequalities widening," the red emperor "measured the potential for inner destabilization of social challenges. He responds by bringing the private economy to heel, hunting down Western influences and "moral reframing" of society.

on aggressive imperialism, reinforced by growing militarism, does not bode well when, on the other side of the Pacific, strategic erasure and political cacophony dilute the authority of the White House.

Xi Jinping holds China with an iron fist, preparing it for a bloc clash that many deem inevitable.

Joe Biden, by wanting to mobilize America's forces for the same cause, projects an image of weakness and ambiguity.

, that this does not lead to a terrible misunderstanding.

Finally, the release on the big screens this Wednesday, September 15 of the film

Adapting the river novel by Frank Herbert, many have broken their teeth there, it is to say if this film was awaited.

A new light in the Hebertian sky

A futuristic tragedy with a very successful aesthetic.

Monumental fresco, rich in very cold and elaborate images, Denis Villeneuve's film, torn between his desire to stick to the text and his ambition for the general public, leaves no room,

, neither to ambiguity nor to esotericism