Film review: Banal plot but aesthetic party in the new adaptation of the space depot Dune

If the plot seems worn and banal, the aesthetic is all the more impressive and should definitely be enjoyed in cinemas. This is what Fredrik Sahlin thinks after seeing Denis Villeneuve's famous and corona - delayed adaptation of Frank Herbert's allegedly unfilmable epic. 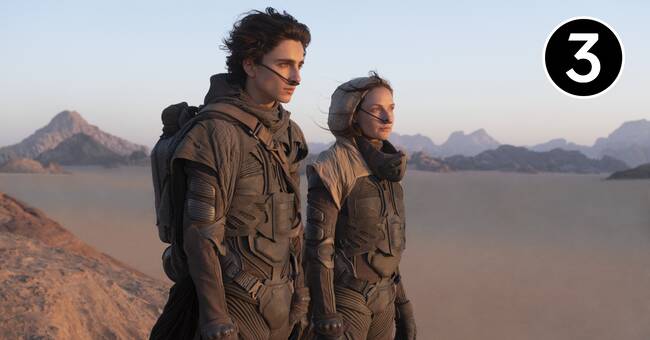 has been said to be unfilmable because of its complex narrative, but it may in itself have been a rumor that David Lynch spread after he crash-landed with his turkey conversion from 1984 - a film that he himself hates so much that he still refuses to talk about it.

Even the old Chilean sci-fi master Alejandro Jodorowsky made a valiant attempt at adaptation in a work that, if it had gotten off, would have clocked in at 15 hours.

Well, for those who have not read the model, and can only judge by the movies, Dune's story does not seem so terribly complicated.

In any case, not the basic conditions:

we see the chosen young man who at first does not want to live up to his responsibilities but then falls short, hardens and follows in the footsteps of his father and the prophecies.

Just like Jesus, King Arthur, Luke Skywalker and all the other Christ figures.

A lot of cobwebs grow on that premise…

We also have a powerful emperor who leads the hard-ruling

, an evil family called Harkonnen and their opponents, the honorable Atreides - and yes, even in this galaxy "far, far away" there is a psychokinetic

that only a few master.

However, it is important to remind yourself - and young people in your environment who shout "rip-off!" - that the model actually came just over a decade before George Lucas began to collect astronomical sums on his space stories.

If now the plot

seems worn and banal (apart from possibly an anti-colonial vein that, however, strikes a chord with itself), the visuals are all the more impressive and should definitely be enjoyed in cinemas. And seen in an IMAX salon, Dune gives an even more mammoth, all-encompassing matinee feeling. Every dollar is, as they say, on the canvas.

It is extremely beautiful, powerful and every other word you can think of to (fruitlessly) try to convey an aesthetic party like this. Hans Zimmers as usual impressive music, the imaginative production design and the suggestive photo - everything sits where it should and conveys greatness and fate-saturated weight; an illusion that what we are looking at is important.

"A Star Wars for adults" is said to have been directed by Canadian director Denis Villeneuve (Arrival, Blade runner 2046) himself, and yes, we avoid all infantile muppets and fun-loving elements (like the eternally annoying robot C-3PO). Here it is instead grave elves and melancholy that apply, and high-sounding speeches about manhood, courage and murderous men - which in itself can be involuntarily laughable.

Stellan Skarsgård, who with a meaty "fat suit" turns the arch-villain Baron Vladimir Harkonnen into a slimy and a bit pathetic heffa lump - he even allows himself to throw in some references to Marlon Brando's tormented patriarch Colonel Kurtz in Apocalypse Now.

Denis Villeneuve decided early on not to, like David Lynch, squeeze the whole story into a movie, because he did not want to rape himself too much on Herbert's work. Which in itself is wise. On the other hand, it feels like a real anticlimax when the afterwords begin to roll in the middle of the adventure that now enters a half-time rest that will be for years.