Hu spicy soup moon cakes are online. Which one do you like for the many novel flavors of moon cakes?

Reporter: Han Zhangyun   The Mid-Autumn Festival is approaching, and moon cakes have become the most conspicuous protagonists of major supermarkets. With the improvement of living standards, the flavors of mooncakes have also been introduced in recent years, such as snail noodles, crayfish, dried plums, stinky salmon... the flavors of mooncakes may be something you can't think of, and no busine 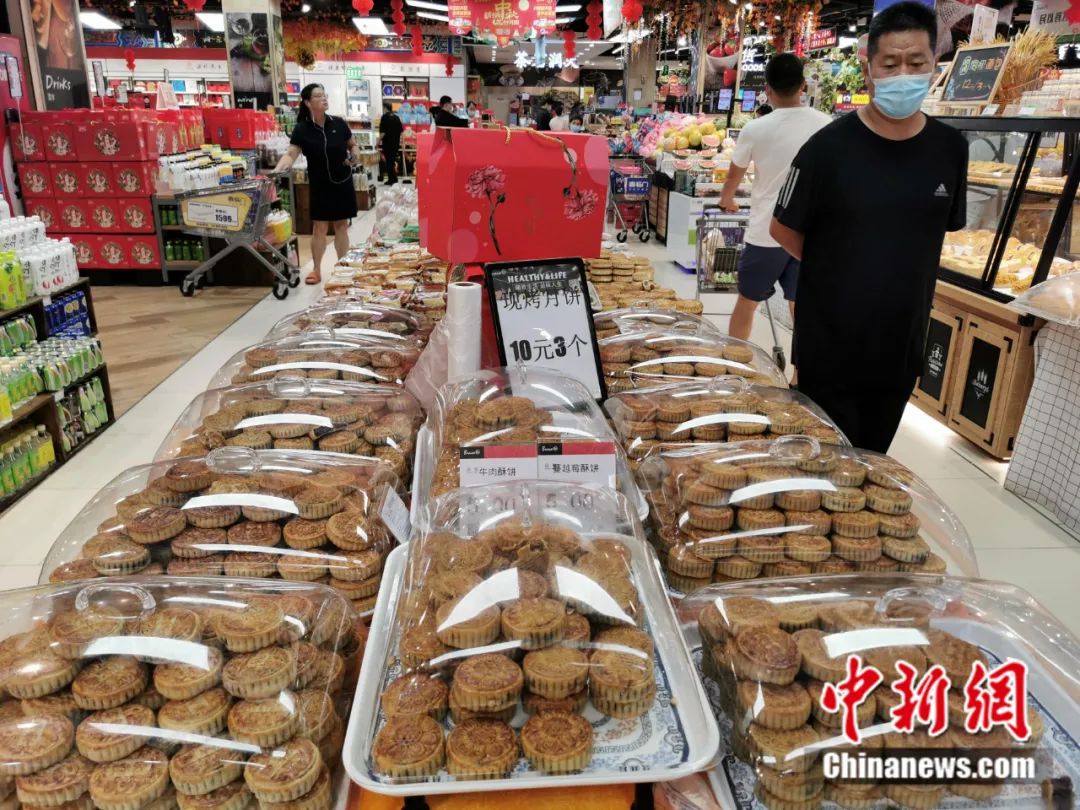 The Mid-Autumn Festival is approaching, and moon cakes have become the most conspicuous protagonists of major supermarkets.

The picture shows that the Mid-Autumn Festival is approaching, and mooncakes dominate the market.

Recently, Henan Zhengzhou Yihu Spicy Soup Enterprise launched a Hu spicy soup flavored moon cake, which triggered a heated discussion among netizens: I like Hu spicy soup and moon cakes, but I don’t dare to eat them together... Here stuffing and that stuffing is called roasting. The bun is wrong?

Hu spicy soup + moon cakes, this wonderful collision and combination, is the taste of Henan.

Hu spicy soup is a specialty snack in Henan. It is salty and fragrant. The thick soup is mixed with gluten, vermicelli, day lily, peanuts, and sliced ​​beef or mutton. The hemp and spicy blend but not too exciting.

Wake up in the morning with a bowl of hot and spicy Hu spicy soup, which is the standard mode for many Henan people to start a full day of vitality.

Can it be dipped in vinegar?

Could it be "dark cuisine"?

The public information of the merchant shows that the spicy soup mooncakes are based on the ingredients of the spicy soup base, adding five kinds of wild mountain mushrooms, velvet mushroom, small shiitake mushroom, cordyceps flower, small black fungus, and bamboo ear mushroom. After more than 90 days, hundreds of times of sauce Blended with materials.

Merchants of this Hu spicy soup moon cake mainly offer gift boxes, 8 pieces in a box, retail price of 168 yuan, and only 300 copies are sold in the merchant’s online store.

A moon cake is 21 yuan, which is not close to the people in terms of price alone.

This spicy soup-flavored moon cake has a very eye-catching appearance.

What exactly do Hu spicy soup mooncakes taste like?

After many twists and turns, the reporter got two Hu spicy soup moon cakes.

From the appearance, it is no different from ordinary moon cakes. A moon cake is 80 grams and the size is also suitable.

Open the moon cake and taste it. The taste is soft and waxy. The sweetness of the lotus paste is more prominent, and it is salty. You can taste the peppery, spicy and other spicy flavors.

The finer particles in the mooncakes are probably all kinds of fungi mentioned by the merchants.

Regarding this Hu spicy soup moon cake, the reporter's feeling is-novel, but it seems to have nothing to do with Hu spicy soup.

The reporter’s colleague said straightly after the test: “You may need a bowl of spicy soup to finish this mooncake.” Netizens expected it and refused to have it.

The picture shows the hot and spicy soup-flavored moon cakes on the Internet aroused heated discussion among netizens.

The brains of the mooncake world are wide open

Food is an art, and the birth of various flavors is like artistic creation, with unlimited possibilities.

And young people who are keen on early adopters can always be captured by the art of food, and are the first to try a variety of novel flavors.

On the eve of the Mid-Autumn Festival this year, a fresh food chain supermarket’s seasonally limited mooncakes have new flavors. In the supermarket’s Zhengzhou store, the mooncakes have mustard salmon flavor, hairy crab meat, crayfish meat, fresh meat... these subvert the tradition The innovative mooncakes of the company have attracted many consumers to try new things.

In order to get a taste, the reporter spent 89 yuan to buy 8 moon cakes of these four flavors.

The mooncakes are all meringues, and the inset of the fresh meat mooncakes is a solid mass of meat. If the crust is softer and does not scum, well, it will taste the same as the buns in the breakfast shop in front of the reporter's house.

The most impressive thing is the mustard salmon-flavored mooncakes. Before eating, you can smell the spicy taste of mustard. When you take a bite, the mustard flavor is not so strong. The filling in the middle of the cake crust is a large piece of salmon meat, chewing seafood. The fresh fragrance.

The picture shows the inset of wasabi salmon-flavored mooncakes.

After trying these kinds of moon cakes, the "post-00" senior "foodie" Xiao Yu couldn't say anything: "I always feel like eating pies, and moon cakes are not the same concept. The merchant tells me that everything can be wrapped into the dough in this way. Are you here? I'm afraid there will be mooncakes with tomato and egg flavor, sauerkraut and fish flavor in the future."

According to the clerk, the sales of these mooncakes are very good. There was originally a ham and floss-flavored mooncake. The sale was suspended because it was too good to be available.

The picture shows that the net is looking forward to more novel mooncakes.

In addition to offline, online is the joyful show of novel mooncakes.

On an e-commerce platform, the snail powder mooncakes that earned enough eyeballs last year are still on sale this year. Inner Mongolia milk tofu mooncakes and Guangxi Aiye-filled mooncakes reveal their regional characteristics. The names of Buddha jump over the wall mooncakes and bird's nest mooncakes are very cold.

Moon cakes are the most important specialty food of the Mid-Autumn Festival, which embodies people's longing for their families and their good expectations for family reunion.

But in recent years, the mooncakes under the market have exploded many topics, from luxurious packaging to hyped "moon cake coupons", from the dispute between North and South flavors to strange flavor mooncakes springing up...

The picture shows this year's Mid-Autumn Festival, the mooncakes with simplified packaging are more affordable.

A small piece of moon cake is burdened with too many things that it shouldn't have, and it is getting more and more out of the traditional charm of "a few mouthfuls of moon cakes and more poems, which affects a bit of sadness".

On the eve of the Mid-Autumn Festival, the reporter visited the major supermarkets in Zhengzhou, Henan Province and found that the mooncake market this year has changed: there is no luxurious packaging and tying. Mooncake gift boxes are two to three hundred yuan as the mainstream price; bulk mooncakes are sweet and salty, and one piece is six or seven yuan. There are Beijing-style, Cantonese-style, Soviet-style, cloud-style...not only the price is more friendly to the people, but also more choices.

In addition, the cultural and creative moon cakes of major cultural museums and institutions have frequently appeared in circles with their exquisite visual design and heavy cultural heritage.

The picture shows the Mid-Autumn Festival approaching, and many consumers buy moon cakes.

"Moon cakes return to the world." This is the feeling of the "post-80s" netizen A Lei, "Moon cakes are a family reunion, and what they eat is a Mid-Autumn Festival culture. The taste of moon cakes after the'burden reduction' is more substantial."

Dr. Xie Dongdong, a food science and technology teacher at Henan University of Technology, believes that with the advancement of food science and technology and the public’s demand for good food, traditional moon cakes have been improved and innovated, and there are many novel flavors for consumers to choose from, which is in compliance with market laws. Manifestation.

He also emphasized that businesses must not ignore the bottom line of food safety in order to gain attention.

The picture shows the novelty-flavored moon cakes attracting customers to try them.

"Although the new and exotic mooncakes attract consumers' attention for a while, if the taste is too weird, it can only be a flash in the pan." Xie Dongdong said that merchants want to retain customers for a long time and make their mooncake products more broad. In the sales market, consumers will miss this flavor every year, but it still requires careful research and development and careful polishing of the product.

A bite of moon cake, a ray of miss.

Whether it's the thick traditional five kernels or the fresh custard Liuxin, I believe you will find a mooncake you like.

Finally, the reporter kindly reminded: Although moon cakes are good, don't be greedy.

Be careful, the operation was as fierce as a tiger, and the blood sugar soared to two hundred and five.