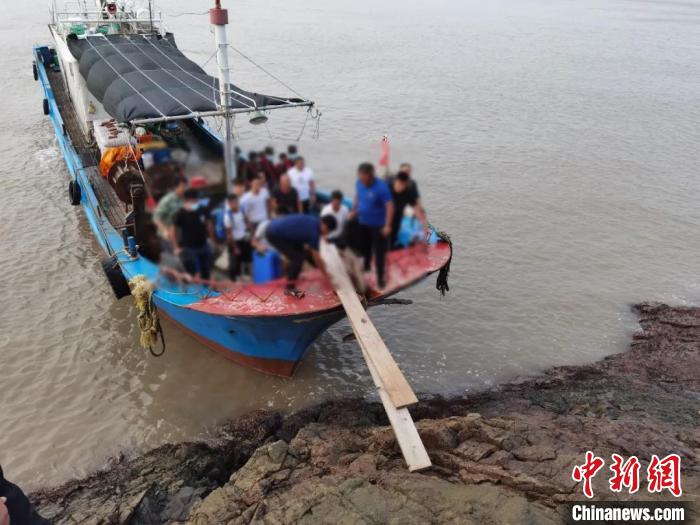 As the saying goes, "Persuade you not to eat April fish, thousands of fish are in your abdomen." However, some people go in the opposite direction.

In late May, the Public Security Bureau of Taizhou City learned of clues that a number of fishing boats from other provinces were found in the coastal waters of Linhai City to fish in the sea during the fishing ban.

After nearly two months of analysis and judgment, the basic organizational context has been found out, and an illegal fishing criminal group headed by Wang Mouxing has emerged.

It is understood that the group organized a number of fishing boats in the coastal waters of Linhai and Zhoushan to enter the East China Sea during the fishing ban.

However, because the gang has been committing crimes at sea for a long time and has a strong sense of anti-investigation and evaded law enforcement vessels, it has brought some difficulties to the arrest of the police.

On July 25th, the sixth typhoon "fireworks" struck this year. In order to do a good job in the defense against this typhoon, the Taizhou Fishery Administration issued an early warning message, requiring all ships at sea to return to Hong Kong for shelter.

From July 28th to August 2nd, the Taizhou and Linhai second-level police, in conjunction with Zhejiang Coastal Police and other departments, dispatched more than a hundred police forces to collect the nets in Linhai, Zhoushan and other places in one fell swoop to destroy the group’s movement in the East China Sea. An illegal fishing criminal gang integrating fishing, transportation and sales. 84 suspects including Wang Mouxing were arrested at the scene. Five other provincial fishing boats including Qionglinyu 11609 and Ji Luanyu 03622 were seized on the spot, and 2 vehicles involved in the case were seized. , There are more than 100 sets of fishing gear, and more than 300,000 yuan of bank account funds have been frozen.

It was found that from May to July this year, the gang’s "behind-the-scenes bosses" Wang Mouxing, Chen Moujun and others, when they knew they were in the closed fishing period, organized personnel to arrange for multiple fishing boats to illegally fish in the coastal waters and Zhoushan waters. Aquatic products.

The gang used a variety of methods to evade detection. Through unified dispatch and remote command by "behind-the-scenes bosses," multiple fishing boats used two-boat trawling and other operations to illegally fish in Linhai and Zhoushan waters. It was illegal in only two months. A total of 1.5 million kilograms of aquatic products such as herring, hairtail, and portunus were caught.

At the same time, the "behind-the-scenes boss" arranged to pick up fresh boats to sell the aquatic products caught by the fishing boats to Zhejiang, Fujian and other places, and the amount involved was more than 75 million yuan.

According to the police, in this case, the criminal suspect’s illegal fishing of wild aquatic products during the closed fishing period disrupted fish breeding and severely damaged the national fishery resources. In addition, the gang in this case is tightly organized and has a clear division of labor. The illegal fishing of aquatic products is huge in quantity and bad in nature. In addition, the gang arbitrarily shut down the AIS ship positioning and identification system, which is likely to cause marine ship traffic accidents, which is not conducive to positioning and rescue after the accident, and there are serious safety hazards.

It is reported that the public security organs of Taizhou and Linhai have strengthened departmental cooperation, focusing on "catching, transporting, trafficking" and other links, destroying criminal networks and dens throughout the chain, and resolutely cutting off the illegal fishing underground industry chain, which strongly supports the ban on fishing during the fishing moratorium. The orderly development of the sea area has effectively protected the ecological environment of the sea, and has played a warning and educational role in enhancing the protection of fishery resources in the whole society and strengthening the concept of respect, compliance, and protection of nature.