Customers flock to buy chemical-free donkey milk soap, which is manufactured in a project that is the first of its kind in Jordan and the Middle East, hoping that it will bring them a magical solution to their skin problems after months of mocking some of the main ingredient of this soap.On a small farm 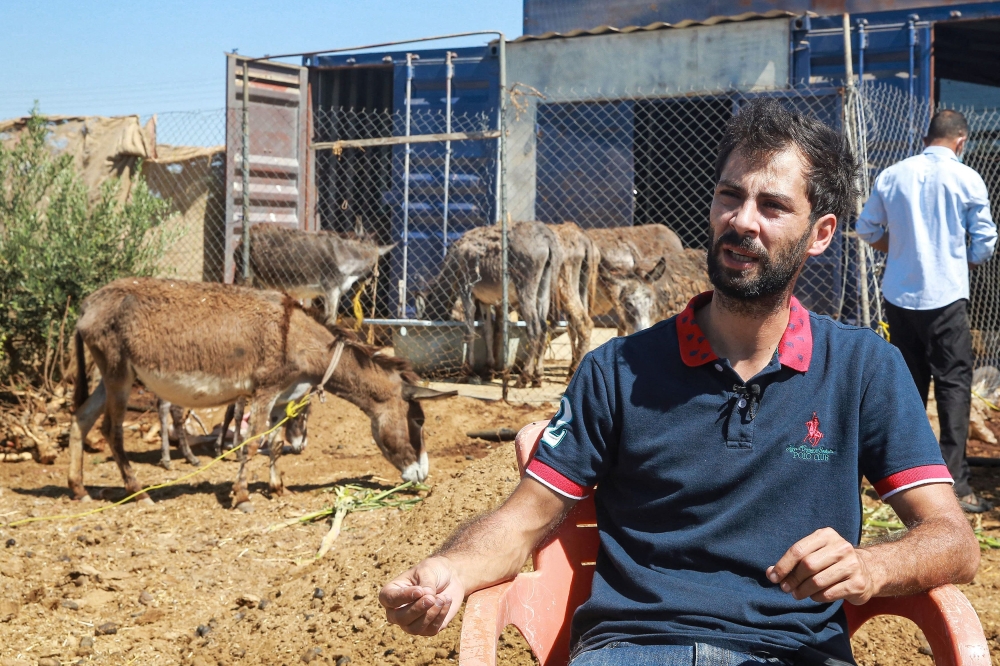 Customers flock to buy chemical-free donkey milk soap, which is manufactured in a project that is the first of its kind in Jordan and the Middle East, hoping that it will bring them a magical solution to their skin problems after months of mocking some of the main ingredient of this soap.

On a small farm in the Madaba Governorate, southwest of Amman, twelve donkeys sway every day, waiting for the donkey's milk taken from them to be transported to a small workshop in Amman to make soap.

Imad Attiyat, 32, a co-founder of the "Asses Soap Production" project, said, "In the beginning, many mocked and ridiculed the idea and said, 'There is nothing left but the donkey to milk?

Or it's crazy to put something on my body that has something to do with a donkey."

"It's different," adds the young man, who is standing next to a barn made of recycled materials that includes a large blue iron shipping container, after the project distributed 160 free soap bars to try.

After that, orders became "exceeding 4,500 bars of soap per month".

After a breakfast of fodder and vegetables, the she-ass is milked by an electronic device and only one liter a day is withdrawn in batches, while another liter is left to feed its young.

The milk is stored in a cold room on the farm, and quantities of it are transported every three days to the factory in Amman. Each liter of donkey's milk is repaired to produce thirty bars of soap, and olive oil, almond oil, coconut oil and shea butter are mixed with it.

The owner of the project idea, Salma Al-Zoubi, as she mixes the ingredients in a large metal bowl, points out that "this is a product that exists in other countries in the world," meaning that it is not a purely Jordanian innovation, but the idea that the product is "100% Jordanian with all production components from Jordan ", she liked it with its partners to establish the project.

And she adds, who wears gloves and special clothes to maintain hygiene and sterilization, that the idea came to her after knowing "the importance and benefits of donkey's milk."

The retired educator and environmental activist notes that some research is currently digging into the possibility that ass milk can "rejuvenate skin cells and reduce signs of aging" and help "cure certain skin conditions such as eczema and skin tone."

The donkey's milk soap contributes to balancing the degree of moisture in the skin, and removing the effects of spots, acne and wrinkles, because it contains "proteins and mineral elements, including magnesium, copper, sodium, manganese, zinc, calcium and iron", which are "very important for the skin," according to the nutritionist. From Reviva Beauty Center in Amman, Susanna Haddad.

Haddad confirms that donkey milk "contains low levels of casein (a slow-digesting coagulable protein)" and "higher percentages of whey, which has antimicrobial properties and compounds that can inhibit the growth of viruses and bacteria."

It is rich in proteins that attract water, so it is a good moisturizer for the skin, and contains antioxidants that protect cells from sun damage.

Lawyer Esraa al-Turk, 48, says that she is keen on using ass' milk soap constantly, as she is an "environmental activist" and is passionate about "in search of such natural products". She adds, with a smile, "I take care of my skin, and I don't wear makeup all the time because I'm veiled, and I've been daring to go out without makeup since I started using this soap."

The soap is sold through the project's Facebook page at relatively high prices compared to other types of soap, due to the scarcity of donkey milk.