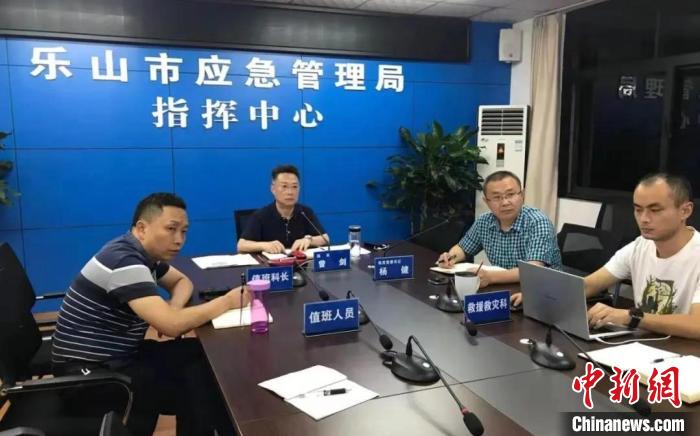 China News Service, Chengdu, September 5 (Reporter Liu Zhongjun) The reporter learned from the Sichuan Flood Control and Drought Relief Headquarters Office on the 4th that the province is fully responding to heavy rain and continues to maintain a four-level flood control emergency response.

From 8 o'clock on the 3rd to 8 o'clock on the 4th, some parts of the Sichuan Basin, Ganzi Prefecture and Liangshan Prefecture received heavy rains, including Leshan, Meishan, Ya'an, Suining, Zigong, Yibin, Mianyang, Guangyuan, Bazhong, and Nanchong in 10 cities and 28 counties. Heavy rain fell in some places, especially in Zhaizi Village, Donglin Township, Jingyan County, Leshan City, with a rainfall of 316.3 mm, the first time since Jingyan County had a meteorological record.

Emergency workers in Bazhong at the collapse site are checking the condition of the mountain.

On the 3rd, due to the recent continuous heavy rainfall, 14 houses in Xiayi Township, Shiqu County, Ganzi Prefecture were damaged by the disaster, and 48 people were affected. The water level of the flood discharge channel next to Zhiba Temple in Zhiba Village, Zhenda Township soared, causing 500 meters of hardened roads. Part of the hardened and hardened playground was damaged, with no casualties.

At 0:00 on the 4th, a mudslide caused by heavy rainfall at 2765 km + 400 m (small place name: Longdanxi) in Tianquan County on National Highway 318, the collapse amount was about 1,000 cubic meters, and the road span was about 20 meters, causing traffic interruption. There were no casualties or damage to vehicles at the scene, and traffic control has been implemented.

Affected by heavy rain, waterlogging occurred in some areas of Zigong City.

As of 8 o'clock on the 4th, the Sichuan Provincial Office of Prevention and Control of the relevant cities and prefectures in the early warning area reminded them to pay close attention to the rain and make emergency preparations.

Among them, 12 related counties (cities, districts) in 11 cities (prefectures) including Chengdu, Deyang, Mianyang, Guangyuan, Suining, Leshan, Nanchong, Bazhong, Ya'an, Meishan, and Aba have been video dispatched, requiring all localities to maintain Be highly vigilant and do a good job of preventing and responding to heavy rainfall such as on-duty, transfer and avoidance, and information reporting.

The latest weather forecast shows that from the 4th to the 5th, there will be light to moderate rain in various parts of the Sichuan Basin on cloudy days, including Bazhong, Nanchong, Suining, Ziyang, Neijiang, Zigong, Leshan 7 cities and the eastern part of Meishan and Guangyuan 2 cities, Dazhou, Guang'an 2 There were heavy rain to heavy rain in the western part of the city, and local heavy rain.

Most parts of the Western Sichuan Plateau and Panxi area were cloudy with showers. Among them, there were moderate rains in parts of Panxi area, and some heavy rains.