The son of a Chicago broker... How did Donald Rumsfeld survive the final scene in Afghanistan?

Fate did not allow former US Defense Secretary Donald Rumsfeld to see with his own eyes the moment the last American soldier left Afghanistan, declaring the end of the war that Rumsfeld ignited nearly 20 years ago. 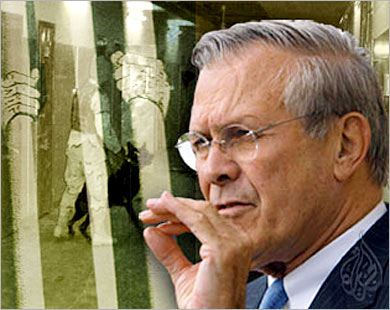 Fate did not allow former US Defense Secretary Donald Rumsfeld to see with his own eyes the moment the last American soldier left Afghanistan, declaring the end of the war that Rumsfeld ignited nearly 20 years ago.

Only about two months separate the death of Rumsfeld on June 29, 2021, and the final withdrawal of US forces from Afghanistan on the night of Tuesday, August 31, 2021.

But the world will not forget Rumsfeld as one of the main architects of America's unending decades-long wars in Iraq and Afghanistan.

The son of a Chicago broker

July 9, 1932: Donald Henry Rumsfeld was born in Chicago, his father was a real estate salesman and then joined the Navy during World War II, and in his childhood;

Rumsfeld was in the scouts as he loved wrestling.

After studying political science at Princeton University with a grant from the US Navy, he followed in the footsteps of his father in the army and worked as a pilot and flight instructor between 1954 and 1957.

1962: He went to Washington, DC, to work initially as an assistant to a member of Congress before being elected to the House of Representatives for the state of Illinois.

1969: Rumsfeld resigned from his position to run Richard Nixon's Office of Economic Opportunities, before taking other positions in the US administration, including the position of US ambassador to NATO between 1973 and 1974.

After Nixon resigned over the Watergate scandal, Rumsfeld was named first Gerald Ford's transition team leader and then White House chief of staff.

1975: He was appointed Minister of Defense, becoming the youngest person to hold this position, as he was 43 years old.

He oversaw the development of the nuclear submarine Trident and the MX intercontinental ballistic missile programs, and he undermined then-Secretary of State Henry Kissinger's work on SALT II strategic arms control talks with the Soviets.

After Ford lost to Jimmy Carter and left office in 1977, Rumsfeld moved to the private sector while maintaining some part-time federal obligations and roles, including serving, at one point, as special envoy to the Middle East for President Ronald Reagan.

Rumsfeld spent nearly a decade in the top management of pharmaceutical company J.D. Searle & Co., serving as CEO and chairman of the electronics maker General Instrument before returning to the pharmaceutical industry as president of Gilead Sciences.

Rumsfeld has not completely shied away from politics, having been chosen to chair a bipartisan committee to assess the ballistic missile threat to the United States in 1998.

The investigation sparked sharp criticism of the intelligence assessments under the administration of former US President Bill Clinton, which underestimated security risks to the North American continent after the collapse of the Soviet Union.

After the 2000 US presidential election, Rumsfeld was nominated to serve as Secretary of Defense again under George W. Bush.

After he was the youngest who held this position, he became, at that time, the oldest of those who held the position.

Rumsfeld, who was welcomed by party conservatives, was a foreign policy advisor to the Bush campaign.

Bush described Rumsfeld as a man of "great judgment and vision."

Rumsfeld found in the government of President Bush Jr. strong personalities such as Colin Powell, the Secretary of State, and Vice President Dick Cheney, who succeeded him as White House chief of staff during the Ford administration in the 1970s.

One of the Bush administration's priorities was to prepare the Pentagon to deal with new and evolving security threats, with Rumsfeld tasked with trying to modernize a military that was seen as resistant to change.

Rumsfeld was having a breakfast meeting at the Pentagon with members of Congress to try to garner support for a missile defense system when the World Trade Center was targeted on the morning of September 11, 2001.

Rumsfeld was still inside the Pentagon when the headquarters of the Defense Department itself was hit by another hijacked plane, as he insisted on continuing his daily press conference.

He later recalled feeling the building's shaking and running toward the crash site, which led to a stampede as officials struggled to locate him.

Outside, he wrote, "I found the fresh air and chaotic scene of black smoke rising from the west side of the building. I ran around the Pentagon, then saw the flames."

Video footage broadcast by CNN showed Rumsfeld helping to transport someone to a safe place before returning inside to help coordinate the American response to the attack.

Rumsfeld floated the idea of ​​launching retaliatory strikes not only on the camps of Osama bin Laden, the prime suspect, but on Iraq as well.

Rumsfeld competed for the title of "architect of the war on Iraq" with a number of prominent figures of the neo-conservative movement, whose influence increased after the attacks of September 11, 2001.

October 7, 2001: Rumsfeld leads US forces to launch an air campaign against al-Qaeda and the Taliban in Afghanistan.

A swift ground campaign followed, improving Rumsfeld's reputation as he regularly reported on what was going on on the ground at press conferences.

By 2002, President Bush placed Iraq, along with Iran and North Korea, in what he called the "axis of evil," which he said threatened world peace by seeking those countries to acquire weapons of mass destruction.

The invasion of Iraq began in March 2003, despite continuing questions about the evidence and justifications regarding Iraq's possession of a stockpile of biological, chemical or nuclear weapons.

Rumsfeld, a top hawk in the US government, was seen as a key architect of the invasions of Iraq and Afghanistan.

Rumsfeld predicted in a memo that the wars would be "long and difficult", something that history has proven painfully true, as American forces were forced to withdraw from conflicts after nearly two decades.

- The Minister of Defense was not far from the headlines and the big gaffes, as criticism was chasing him about the way he dealt with conflicts, and he was famous for his frank and controversial statements.

- Bush stood firmly by his side, even in the wake of the Abu Ghraib prisoner abuse scandal, when photos of US forces were leaked alongside Iraqi prisoners in humiliating positions.

Rumsfeld said he offered to resign twice over the Abu Ghraib scandal, but the president continued to support him and asked him to stay in office after he was re-elected in November 2004.

President Bush Jr. has been praising Rumsfeld's work and legacy unlike his father, George HW Bush, who called Rumsfeld "arrogant" and damaged his son's presidency.

2006: With growing American public anger over military intervention in Afghanistan and Iraq, Rumsfeld was forced to resign as Secretary of Defense.

"the known and the unknown"

2011: His memoirs were issued under the title "The Known and the Unknown" in which he defended his positions and actions regarding the way the war was handled, but regretted some of his comments, and admitted that the United States could have sent more troops to Iraq.

The director admitted that after 33 hours of interviews with the mysterious Rumsfeld, he seemed to know less about the causes of the Iraq war than he did when he started the project.

The day after his death at the age of 88, The Intercept wrote a sensational headline saying, "Farewell, Donald Rumsfeld, the petty war criminal." ".