Review: Suzanne Osten pays tribute to the child and the art of theater in the return to Unga Klara 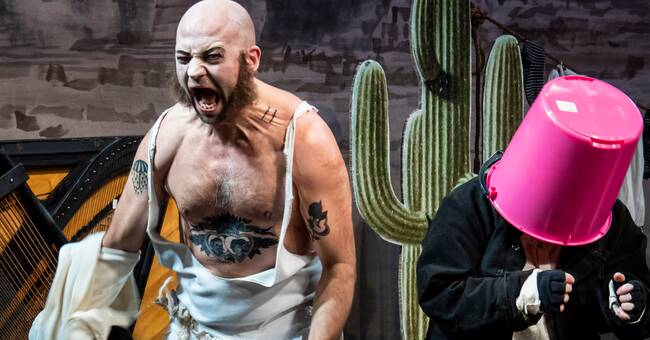 Suzanne Osten is back at Unga Klara.

And in a way, it feels like she's never left.

She is so at home in this child's universe, where no question is too difficult or too complicated to playfully examine and let the children's audience meet.

The cheese has always cared for the children and stood by their side.

She herself had a tangled childhood and perhaps it is the child herself that she repeatedly picks up and pats.

With her, the children are always the healthy ones in the sometimes sick families.

Suzanne Osten is far from a demon director.

She never alone takes the credit for a successful production. True to her habit, she is also now a team player who takes care of the collective and picks out the best from each individual.

Buster Keaton on the Moon

is the fruit of a successful collaboration with playwright Gunilla Linn Persson. They have taken their starting point in a real family, and in this case a seemingly dysfunctional one. Buster Keaton was the child acrobat who loyally performed at his parents' circus - where he got to play the disobedient child, who flew like a rag doll across the stage. But it was also he who got up and eventually made his own silent film career.

, Buster, in Siri Hamari's little boy girl character, becomes the symbol of how the broken in man can be patched together no matter what boots we get in life. Hen takes with just as cohesive stone face as deep serious responsibility for the family, where father Joe (Gustav Deinoff) and mother Myra (Parwin Hoseinia) are infinitely unstable and little brother Harpo (Klas Lagerlund), with constantly new colors in the curls, constantly stepping into new hyss and roles. From time to time, the breakaway king Houdini enters. Maria Johansson Josephson has a voice that takes us to heavenly heights and lets the music become a resting place in this otherwise explosive performance where a people bubble can be a carousel and a mountain of garbage the way to the back of the moon.

The temperament is Ostens and the temperature is perhaps Linn Perssons

- here it will at least be playful, hot-tempered and sincere.

The stage is sprinkled with debris, gadgets, pictures and old car tires.

A large zebra is moved around the stage and its stripes, which are repeated in both trousers and curtains, of course demonstrate the right to be different but still belong.

It's okay to be imperfect, different and even stupid at times, but there is always forgiveness, reconciliation and new opportunities around the corner.

Buster Keaton on the Moon

is a notion of how there is a way out of vulnerability, and that way is spelled dreams and imagination.

It pays homage to the child as much as the art of theater.