Back to school talk shows: what will Quotidien, C à vous and TPMP be like?

The three main talk show shows are back on Monday, with "Quotidien". presented by Yann Barthès on TMC, "Touche pas à mon poste" presented by Cyril Hanouna on C8 and &amp; quot; C à vous &amp; quot; presented by Anne-Elisabeth Lemoine on France 5. &amp; nbsp; It is the latter which evolves the most for its return to the antenna, after a summer break. 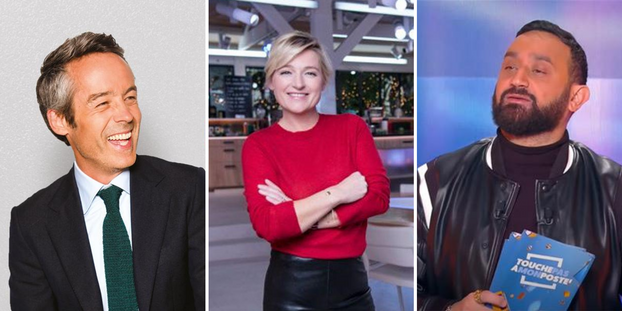 The three main talk-show programs are back on Monday, with "Quotidien" presented by Yann Barthès on TMC, "Touche pas à mon poste" presented by Cyril Hanouna on C8 and "C à vous" presented by Anne-Elisabeth Lemoine on France 5. It is the latter which evolves the most for its return to the air, after a summer break.

Talk shows are making their comeback. From Monday evening, viewers will discover the new versions of the three main daily shows of the genre:

. And it is on the side of the program presented by Anne-Elisabeth Lemoine on France 5 that the changes are most visible. The program will gain half an hour and will therefore end this season at 8:50 p.m.

wins more airtime, but also more columnists: Matthieu Belliard and Mohamed Bouhafsi join the band, Bertrand Chameroy (who only spoke on Fridays) will speak every day.

, zapping the news, integrates the show.

A short program of humorous fiction will also punctuate

But he will arrive a little late in the season.

The novelties are a little less numerous on the side of

. On C8, some new sequences appear, such as "Les Flingueurs du Paf" and "The surgeons of the image". Sandrine Sarroche integrates the team of chroniclers of

a humorous note in song.

hosts a new humorous sequence on influencers, and a policy called "8:15 pm Express" to cover the presidential campaign. The band changes little, with the notable exception of the arrival of Anne Depetrini, who joins the comedians of the show, and the absence of Paul Larrouturou (gone to LCI and the show of Ruth Elkrief) and of Salhia Brakhlia (who focuses on Franceinfo's morning show).