Mission 'Save the margaritona', the giant clam of the Ebro in danger of extinction

The giant river pearl clam, auriculate naiad or margaritone (margaritífera auricularia), is a freshwater bivalve mollusk belonging to the oldest family of the ... 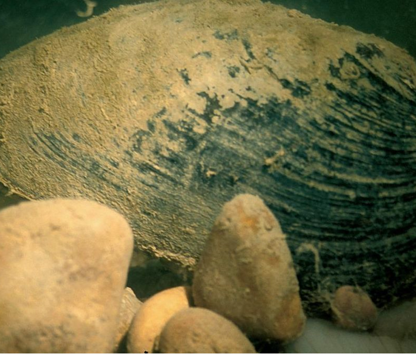 ), is a freshwater bivalve mollusk belonging to the oldest family of the Unionoids group, also known as freshwater mussels.

Until the 19th century it was present in the great rivers of Western Europe and North Africa, but the species has seen its populations decrease drastically since the beginning of the 20th century, to the point that it is in "danger of extinction" within the Spanish Catalog of Threatened Species and in 2018 it was declared in "critical situation".

disappeared in almost all of Europe

and 99% of the existing specimens have been located in the Ebro river basin, mainly in the sections of Navarra, La Rioja, Aragon and Catalonia.

Pollution of waters, competition with invasive alien species, such as the Asian clam, and its complex reproductive system, which requires larvae to survive a host fish, are among the main causes of its decline.

The Ministry for the Ecological Transition, the Ebro Hydrographic Confederation, the Community of Navarra and Aragon have signed an agreement to protect margaritona, one of the rarest and most endangered freshwater mollusks in Spain.

The aforementioned agreement articulates the collaboration between the different organizations involved in actions for its conservation.

The most notable measure of the agreement is the creation of a margaritone breeding and recovery center, since 'ex situ' reproduction techniques have been perfected thanks to research carried out over the last decade, mainly in Aragon. .

undertakes to provide the necessary land and infrastructure to carry out the work.

Spain has been working for years in the protection of the

through a strategic plan that includes the basic lines of action and measures for the conservation of the species, which, in turn, serves as a reference for the action of the autonomous communities.

The Government of Aragon has recently completed the process of citizen participation to review the decree of the margaritone recovery plan, approved 15 years ago, and adapt it to the current situation.

was declared an endangered species

and having an adult specimen could entail a penalty of up to 16,000 euros.

In the Iberian Peninsula there are only a few population strongholds in the Ebro river, in the Imperial Canal de Aragón and in the Tauste Canal, for which Aragón has a great responsibility in their conservation.

In 2005, it launched a recovery plan for the

, within the LIFE Nature Project.

Since then, different techniques for captive breeding have been tried in the experimental center of La Alfranca, near the city of Zaragoza, which has made it possible to

The reproductive cycle has been achieved using as host fish the friar fish or river blenny fish, also classified as endangered, and the sturgeon, an exotic species in Aragon that is used only in controlled conditions of captivity.

The Zaragoza City Council started in 2019 the release of friar fish in the ponds of public parks to collaborate in the salvation of the margaritona.

Most of the juvenile specimens were released in sections of the Ebro river as it passed through Aragon and others were used for pilot experiences outside of Aragon: The first was carried out in Gerona, where some

transferred to the Generalitat of Catalonia. .

The second was carried out in Álava, releasing specimens in an area where a population of another native naiad has been registered, which has allowed various actions to repopulate the Ebro.

However, their situation continues to be critical, since in just five years

more than half of the specimens died

in their two main ecosystems, the Canal Imperial de Aragón and the Canal de Tauste.

The reproductive cycle of margaritone is peculiar, and its knowledge allows us to understand the innumerable obstacles that the survival of this species presents and its high rates of juvenile mortality.

Each female releases to the waters where it lives millions of larvae, known as glochids, tiny in size: one-tenth of a millimeter (150 microns).

In less than 24 hours these larvae must coincide with a fish, which acts as a specific host, and on whose gills it hooks.

The larvae develop there for about a month, until they become juvenile individuals, which soon after fall to the bottom of the river and begin to grow as tiny clams.

Since the last ones were born,

have survived in the

, reaching more than one centimeter in length.

In previous years, the survival of those born in captivity who managed to reach these sizes was only a few hundred, although over time it was reduced to only tens.

Therefore, the maintenance of more than a thousand juveniles with these sizes is good news for growth and survival for this highly threatened and long-lived species, as it can live up to 70 years.

Renewables Self-consumption in response to historical increases in electricity: this is how solar panels work