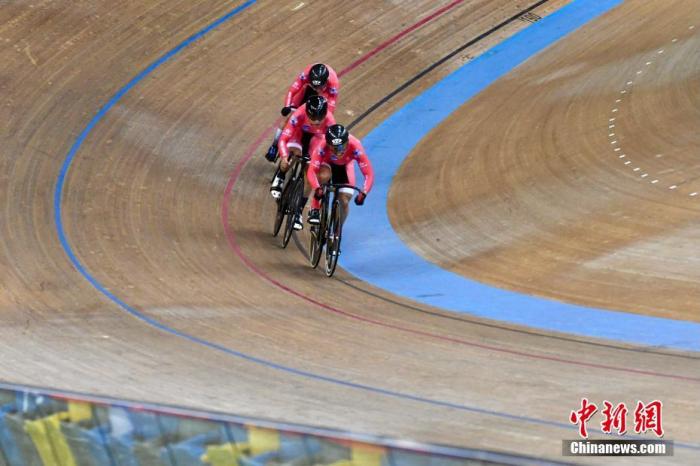 The Chief Executive of the Hong Kong Special Administrative Region, Carrie Lam, extended her warm congratulations and praised her for creating a sports legend in Hong Kong.

Data map: To prepare for the Olympics, on the afternoon of June 17th, the Hong Kong Institute of Sports and the Hong Kong Cycling Association arranged for Hong Kong track cyclists to compete for the first simulation competition.

The picture shows athletes Li Huishi and others preparing for the Olympics.

On the same day, many shopping malls in Hong Kong broadcast live events. More than 100 people gathered at the apm mall in Kwun Tong to watch the live broadcast. Many people held up cards that read "The City Gathers to Support Li Huishi" and "Support the Hong Kong Team" to cheer for Li Huishi.

When Li Huishi won the medal, inspiring cheers and applause were heard in the mall, and some citizens raised their thumbs to "like" her performance.

It is reported that Li Huishi won the bronze medal in the 2012 London Olympics.

This is the sixth medal won by the Hong Kong Olympic team in this year's Olympics, and Li Huishi himself became the first Hong Kong athlete to win medals in two Olympics.

Lam Cheng Yuet-ngor would like to extend her warm congratulations. She believes that Li Huishi's strength and determination can withstand the test of time, with outstanding achievements and creating a legend in Hong Kong sports.

Carrie Lam also pointed out that in recent years, the Hong Kong Velodrome has provided Hong Kong athletes with top-level competition and training venues. The cycling team has also actively cooperated with local universities to use scientific research results to improve athletes' performance.

The success of Li Huishi and the cycling team has brought enlightenment to the direction of sports development and the promotion of elite athlete training. Hong Kong will definitely pay more attention to the cooperation of resources in these areas.

The Chairman of the Hong Kong Legislative Council, Leung Junyan, said that Li Huishi defeated the world's top opponents and once again created outstanding results with incomparable fighting spirit, not only to win glory for Hong Kong, but also to write a new milestone in Hong Kong's sports world.

Liang Junyan also said: "Li Huishi's attitude of winning without arrogance and not discouraging defeat is a model of athletes."

Liang Junyan hopes that this Olympic success will only be the beginning of Hong Kong's sports arena to a world-class level.

The Legislative Council will continue to work with the SAR government and all sectors of society to fully support the sustainable development of sports in Hong Kong.

Chen Zhisi, convener of the non-official members of the Hong Kong Executive Council, believes that the brilliant achievements of Li Huishi and the cycling team reflect the strength of Hong Kong athletes and Hong Kong's investment in sports development. The citizens of Hong Kong are extremely excited about this.

According to information from the Chief Executive’s office, Li Huishi is the first women’s cycling world champion in Hong Kong. She has become a full-time athlete since 2004. She has participated in many competitions for Hong Kong’s international sports scene, including in 2010, 2014 and 2018 in the Asian Games. Won gold medals in three events, and won the World Championships in 2013 and 2019 respectively.