A coincidence led (Umm Suhail) to become one of the first Emirati women working in the field of beekeeping, when she was surprised by a bee hive hiding among the basil bushes in her garden, and she did not know how to deal with it, which prompted her to enter the world of "beekeeping", and despite the many difficulties that faced encountered in the 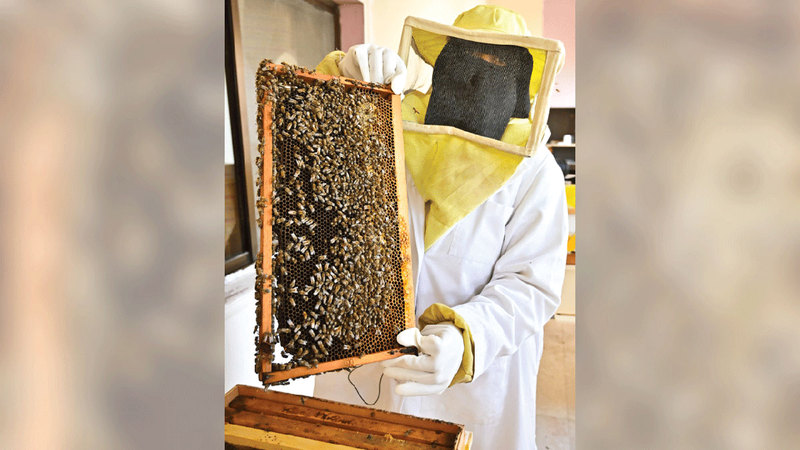 She dreams of achieving sufficiency in “bees” in the country

Umm Suhail: In reality, dealing with bees is very different from the videos on YouTube.

A coincidence led (Umm Suhail) to become one of the first Emirati women working in the field of beekeeping, when she was surprised by a bee hive hiding among the basil bushes in her garden, and she did not know how to deal with it, which prompted her to enter the world of "beekeeping", and despite the many difficulties that faced She encountered her at first, and she was able to become a professional beekeeper, and even become a trainer for those wishing to enter this field, stressing that her goal is to spread knowledge of beekeeping, "it is an unknown science, and an important source of agricultural and economic development in the country", and that the Emirates become the number one country. in beekeeping and export.

In her interview with "Emirates Today", (Umm Suhail) explained that there were many difficulties that she faced when she started, in 2017, learning beekeeping and dealing with it, and the most prominent of these difficulties was the lack of a professional teacher in this field to turn to, and even when I searched through the site « YouTube”, there were not enough videos at that time, and actually dealing with bees is very different from the video clips, pointing out that she found beekeepers’ “groups” on the “WhatsApp” application, a great help in understanding the matter, She added:“It was not easy at first. Bees are ferocious, and at any moment they can attack a person without mercy, and there are many details that I lacked at that time despite their simplicity, such as how to care for bees, and how to choose the appropriate outfit that I should wear when Getting close to the hives, so I was exposed more than once in the beginning to the stings of crawling bees that leaked into the outfit, and in the end I knew the right kind of outfit, and its price was not high compared to the types I was using before.”

(Umm Suhail) pointed out that the many difficulties she faced at the beginning, and then what she discovered of important information about beekeeping as a national wealth and a source for the development of national income, and agricultural development, especially since there are countries where the export of bees is a major part of their sources of income, such as Argentina, for example. For example, all these things encouraged her to do her best to spread the idea of ​​beekeeping in homes and farms, and to help those who want to raise bees by offering them free training courses, and introducing them to the most important equipment they need and where to buy them, adding:“Some may think that the importance of bees is limited to harvesting honey from them, but the truth is that this is a small part of its benefit. Beekeeping in farms contributes greatly to the development and increase of agricultural crops, because bees are a means of transporting pollen seeds from one place to another, and without them, crops will not thrive. and agriculture, and therefore I was keen to direct the training courses that I offer to the category of farmers, because they are more concerned with this matter than others, with a focus on enhancing their environmental sense, and raising their awareness of the dangers of using agricultural pesticides to get rid of bees, because it plays a vital role for them and their farms.” “Some think that beekeeping is a difficult and dangerous hobby or profession, but the truth is that once a person learns its secrets, it becomes easy and perhaps easier than raising livestock.”

She explained that the number of participants in the training courses, which she started at the end of 2020, is more than 500 male and female trainees of different ages. In that, the honey crop increased, and the house’s production per season ranged between 15 and 30 kilograms of honey, and sometimes up to 40 kilograms, pointing out that in an earlier period there were only a limited number of Emirati beekeepers, and most of them do not work with their hands and depend on workers They take care of bees, collecting and sorting honey, and other operations that the beekeeper must perform.

(Umm Suhail) also said that the benefit of honey is related to its use in its season, when honey is used in its season, it is more effective, considering that buying honey from apiaries or a reliable source is the best way to ensure its quality and that it is original, especially since much of the honey offered commercially in the market is not Organically, its makers include unnatural substances in it.

She stressed that it does not aim to sell honey, but rather focuses on the production of bees, and achieving sufficiency in the country by educating people about the importance of this project. As for the production of honey, it is part of the project, and there are other industries related to it, such as the manufacture of candles and soap, and so far There are no factories for these industries in the country, and therefore it seeks to implement them, pointing out that it is currently producing candles and soap and hopes to expand in the coming period.

“Umm Suhail” revealed that there are three seasons called “honey harvest seasons”, namely: the summer season, which coincides with the spring season, and the Sidr season, which coincides with the autumn season, and they are the most common, especially for beekeepers in homes and farms, and the third season is known as a season. Mangroves”, which is linked to areas near the sea and water bodies, where mangroves grow, and the quality of honey depends on several factors, including the method of extracting it, and not being exposed to light, as it is kept in dark colored earthenware or glass containers.

• Market honey is not organic, and its makers include unnatural substances in it.

• Beekeeping is not dangerous, and once a person learns its secrets, it becomes easier than raising livestock.