The journey to find the most expensive feathers in the world began.. a kilo of $ 1,000

On an island in the Gulf of Predavijordur, off the west coast of Iceland, work is active in search of arctic eider duck feathers, with fine down, as one kilogram of these luxurious feathers sells for thousands of dollars, and makes the best quilts in the world. And as every summer, he searches for Approximately 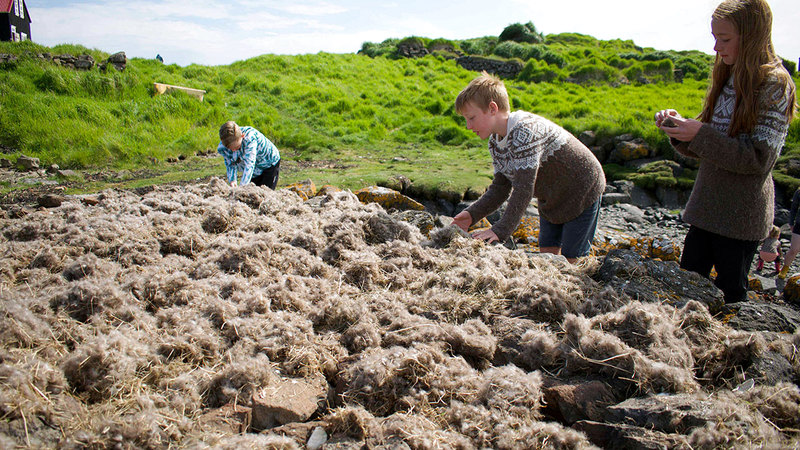 On an island off the west coast of Iceland

The journey to find the most expensive feathers in the world began.. a kilo of $ 1,000

On an island in the Bay of Predavijordur, off the west coast of Iceland, a bustling search for soft-fluffy Arctic eider ducks, a kilogram of these luxurious feathers that sell for thousands of dollars, are the best quilts in the world.

As every summer, nearly 400 Icelandic farmers rummage through the rocks, in the sand, or among tall grass to find a few handfuls of gray feathers for this species of polar duck, which has been nesting since May in this wonderful seascape area. and low population density.

“When there are eggs, we only take part of the fluff," explains Erla Frederiksdottir, president of King Elder, one of the country's leading exporters of feathers.

And when the eider leaves the nest, we take everything.”

The polar eider duck, one of the seabirds in the polar regions, leaves behind a natural treasure for those who seek warmth during cold weather, as its feathers are made of a type of natural fiber, which is one of the warmest in the world, and is characterized by its lightness and extreme ability to thermal insulation at the same time.

The female of these birds, with dark brown feathers surrounded by black, separates the fluff from her chest, to spread her nest, in order to isolate it during the incubation period.

The production of a kilogram of feathers requires the use of about 60 nests, and making each quilt requires between 600 and 1600 grams of these feathers, depending on the required quality.

The global yield of this ultra-luxurious product does not exceed four tons, three of which come from Iceland, which by far leads the list of countries producing this feather, ahead of Canada and other countries close to the Arctic.

On the island of Bjarniar, residents of different generations are busy observing any trace of nests, in a local tradition that likely began in Iceland, during the colonization of the Vikings, who came from Norway at the end of the ninth century.

Since 1847, eiders have been fully protected in Iceland, where hunting and the use of their eggs is prohibited.

However, these birds face danger from many predators, including seagulls, crows, eagles, mink and foxes. However, experts in this animal species confirm that eiders know how to protect themselves.

At a later stage, rotating machines remove other dirt from the feather, by pressing it onto a fine wire mesh.

The final touch is handled by expert hands, which no machine can replace.

The production of the feathers of the world-famous eider bird constitutes a drop in the global production of feathers, estimated at 175,000 tons annually, according to the International Down and Feathers Office.

In addition to their geographical rarity, the path that eider feathers take, from manual assembly to meticulous cleaning, explains their high price: a simple quilt containing 800 grams of these feathers sells for 640,000 ISK ($5,100).