The number of local cases has increased to 153! In this battle, Nanjing faces four major tests

Chinanews client, Beijing, July 28 (Reporter Zhang Ni) According to the latest data from the National Health Commission, on the 27th, there were 55 new local cases of new coronary pneumonia in 31 provinces, including 48 in Jiangsu, 3 in Sichuan, and Liaoning. 2 cases, 2 cases in Yunnan.   From July 20th to 27th, Nanjing City reported a total of 153 local confirmed cases.   For Nanjing, this su 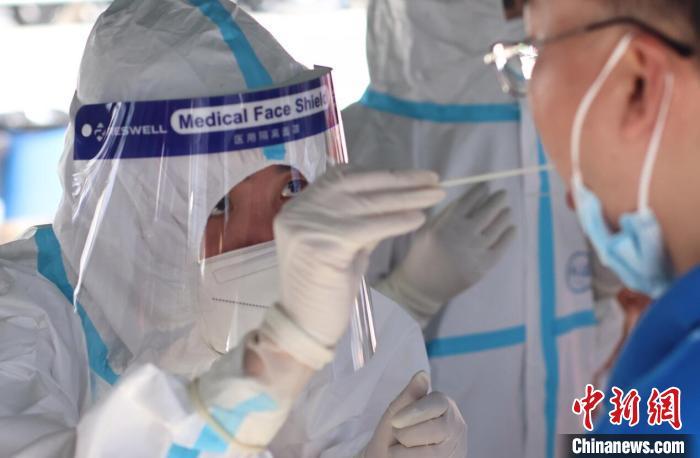 Chinanews client, Beijing, July 28 (Reporter Zhang Ni) According to the latest data from the National Health Commission, on the 27th, there were 55 new local cases of new coronary pneumonia in 31 provinces, including 48 in Jiangsu, 3 in Sichuan, and Liaoning. 2 cases, 2 cases in Yunnan.

For Nanjing, this sudden attack of the epidemic is a tough battle.

In addition to the rapid increase in the number of confirmed cases, Nanjing is also facing multiple challenges such as visits to extreme weather, summer transport and epidemics.

——The spread of the transmission chain, the footprint of the infected person involves many places

From July 20th to 27th, Nanjing City reported a total of 153 local confirmed cases, including 81 cases of light type, 68 cases of normal type, and 4 cases of heavy type.

According to incomplete statistics, in more than a week, the epidemic transmission chain has spread to more than 10 cities in 5 provinces, including Jiangsu, Anhui, Guangdong, Sichuan, and Liaoning, where infected people have appeared.

In addition, the footprints of the infected and close contacts also involve other provinces.

The infected person in Dalian had traveled to Zhangjiajie and the ancient city of Phoenix in Hunan. In addition, they had also transited in Xianyang, Xi'an.

The number of cases is increasing rapidly, and the epidemic "spillover"... Whether all infected persons can be detected in the shortest time and the spread is controlled is the biggest test.

On July 26, the Nanjing "Fire Eye" laboratory was stepping up its construction at the Nanjing International Expo Center, with staff debugging equipment.

At the press conference on the prevention and control of the new crown pneumonia epidemic in Nanjing on the 27th, the traceability results of the epidemic were announced-the strain causing the epidemic is the delta mutant strain.

Ding Jie, deputy director of the Nanjing Centers for Disease Control and Prevention, introduced that the delta mutant strain that caused the epidemic has a strong spreading ability and a fast spreading speed.

The particularity of the place where the epidemic occurred has also led to a further expansion of the spread.

In the face of mutated strains with stronger transmission capacity, only expanded control, intensive screening, and early detection of cases can effectively deal with them.

Severe weather conditions were accompanied by the outbreak.

The floods in Henan are still ongoing, and the No. 6 typhoon "Fireworks" has landed again this year.

From the 25th, the impact of typhoon "fireworks" on Nanjing has continued to increase.

According to a message from the Nanjing Meteorological Bureau, the "firework" center has entered the territory of Nanjing after 10 o'clock on the 27th.

In the afternoon of the same day, the Nanjing Municipal Meteorological Department issued a yellow warning of heavy rain.

Data from the Meteorological Department showed that during the strongest rainfall period on the 27th and night, the rain intensity in Nanjing was 51.7 mm in 1 hour and 144.6 mm in 6 hours.

It is expected that there will still be moderate to heavy rains in the city on the 28th, with southeast winds of magnitude 5 to 6, and gusts of magnitude 7 to 8.

Faced with the dual challenges of epidemics and extreme weather, how to prevent and reduce disasters while taking into account epidemic prevention is the key.

——It is difficult to overlap the epidemic and summer travel

The outbreak of the epidemic in Nanjing this time coincides with summer travel and summer vacation, and is the peak period of personnel travel and mobility.

Nanjing Lukou International Airport, where the epidemic has occurred, is "an important hub for the world-class airport cluster in the Yangtze River Delta", which also makes it difficult to stop the spread of the virus.

After the outbreak, Nanjing City has successively upgraded a series of prevention and control measures.

This includes, before leaving Nanjing, all types of personnel must provide a green code of health code and a certificate of negative nucleic acid test within 48 hours; strict access control in all communities; suspension of operation of 8 long-distance passenger stations in the city; suspension of airtight KTV, movie theaters, gyms, etc. The premises are open, and so on.

Under the epidemic situation, Nanjing is facing numerous challenges.

However, this battle in Nanjing,

Must win, and must win!