Why did Nanjing's local cases break the hundreds of epidemic chain quickly spillover?

(Fighting against New Coronary Pneumonia) Why is the chain of over 100 local cases in Nanjing overflowing rapidly?   China News Agency, Beijing, July 27th (Mar Shuaisha Li Chun) From July 20th to 26th, Nanjing has reported more than 100 local confirmed cases of new coronary pneumonia. In the past eight days, this round of the epidemic in Nanjing has spread to 5 provinces and 9 cities. Why this ro 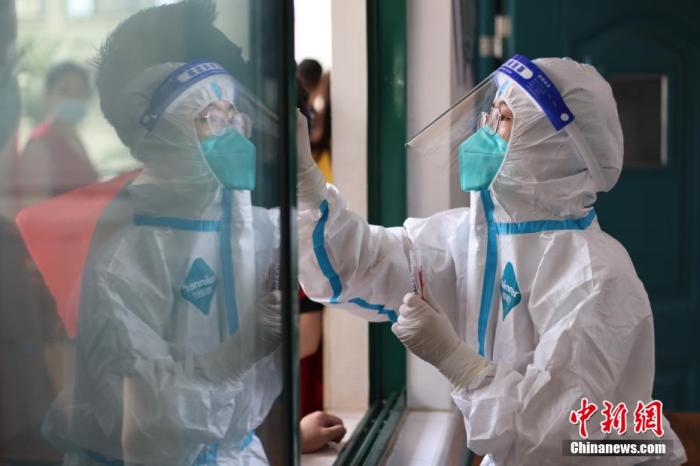 (Fighting against New Coronary Pneumonia) Why is the chain of over 100 local cases in Nanjing overflowing rapidly?

In the past eight days, this round of the epidemic in Nanjing has spread to 5 provinces and 9 cities. Why this round of epidemic has spread so extensively and other issues have attracted attention from all parties.

The early confirmed cases of this round of the epidemic were mainly airport staff.

After testing, 7 confirmed cases and 2 asymptomatic infections were diagnosed. They were mainly security personnel participating in airport flights, including ground service, cleaning and other positions.

The epidemic has further spread through social activities and work environment pollution.

As of the 26th, Nanjing has reported a total of 106 local confirmed cases, mainly from Nanjing Lukou Airport cleaning, cabin cleaning staff, ground staff and other staff and related cases.

Yu Chuanhua, professor of epidemiology and health statistics at Wuhan University, said in an interview with the media recently that international ports such as airports and cargo terminals are important sources of imported cases of COVID-19 and COVID-19. In addition to human-to-human transmission, many goods and even air are also Can carry the virus and spread to people.

This time, the cabin cleaning of Nanjing Airport was infected. It is not ruled out that you did not wear a mask when cleaning the cabin.

In addition to Nanjing, the current round of epidemic transmission chain has spilled over to 8 cities. Why has it spread so widely in a short period of time?

The particularity of the place where the epidemic occurred may be one of the reasons for the further expansion of the spread.

In an interview with the media recently, academician Zhang Boli of the Chinese Academy of Engineering reminded that as the overseas epidemic is still serious, the airport as a transportation hub, especially the large airport carrying overseas flights, needs to be extra vigilant.

Another reason may be the virus itself.

According to official reports, judging from the cases that have completed genetic sequencing, the new coronavirus strain that caused the epidemic is the Delta strain.

Judging from the previous related epidemics, the strain has increased adaptability to the body, spread faster, has a higher viral load, and has a longer treatment time, making it easier to develop into severe illness.

This is not the first time that Mainland China has fought against Delta.

Yang Yi, an expert in the treatment of new coronary pneumonia and director of the Department of Critical Care Medicine at Zhongda Hospital affiliated to Southeast University, revealed in an interview with the media on the 22nd that most of the confirmed cases in this round of the epidemic in Nanjing had been vaccinated.

Shao Yiming, a researcher at the Chinese Center for Disease Control and Prevention, introduced this at an official press conference in May this year.

Many experts have pointed out on different occasions that infection after vaccination does not mean that the vaccine has failed.

Regarding the outbreak in Nanjing this time, Yang Yi also said that the vaccinated cases have generally mild symptoms, and the probability of turning into a severe case is significantly lower, and the course of the disease is relatively short.

This also shows that vaccination still has a protective effect.

Zhong Nanshan, an academician of the Chinese Academy of Engineering, pointed out in late June this year that in response to the Delta strain, the concept of close contacts must be changed. Currently, the commonly used domestic vaccines are still effective against the Delta mutant strain and people should be vaccinated.

Zhang Boli also recently emphasized again that it is necessary to actively promote and vaccinate.

After being vaccinated, even if infected, it is mild and will not turn to severe, and it has a protective effect on the patient.

News/Politics 2021-07-22T06:01:39.395Z
Nanjing, Jiangsu: Virus gene sequencing results preliminarily pinpoint the source of infection
Life/Entertain 2021-07-25T23:49:48.104Z
The recent continuous occurrence of local epidemics to speed up vaccination is still the key to epidemic prevention
News/Politics 2021-10-30T11:31:16.462Z
"Number" reading this round of new crown epidemic: What is the situation of prevention and control? Why are there many severe illnesses? What is the level of "strengthening needle" antibody?
ADS
News/Politics 2021-11-10T13:42:55.345Z
The grasslands of northern Xinjiang that have experienced the epidemic: winter is not far from spring
Life/Entertain 2021-08-03T13:38:56.681Z
Yangzhou upgrades prevention and control measures to "encircle and wipe out" the virus
Life/Entertain 2021-12-03T13:44:52.921Z
The Manzhouli epidemic may have affected 4 provinces and 6 places in Dalian
Life/Entertain 2021-07-26T22:59:22.483Z
Experts in 38 newly confirmed cases in Nanjing: the imported virus cannot be ruled out as a mutant strain of Delta
News/Politics 2021-09-14T12:08:57.189Z
The outbreak in Fujian has a long incubation period, low-age infections, and when will be extinguished, attracting attention
News/Politics 2021-11-05T04:17:37.614Z
The cumulative number of local confirmed cases in Inner Mongolia increased to 183