[NHK] As the infection continues to spread rapidly, the Tokyo Metropolitan Government will consider restrictions on regular medical care for medical institutions in Tokyo and secure beds for patients with the new coronavirus. 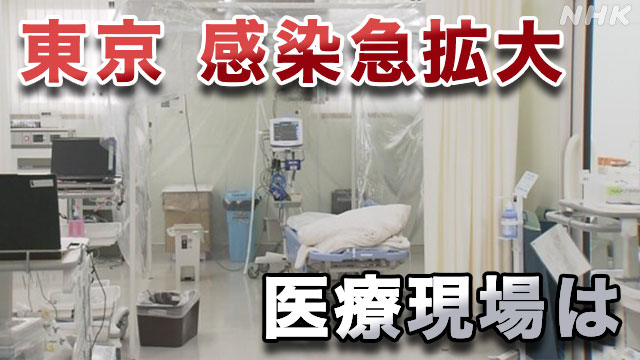 As the infection continued to spread rapidly, the Tokyo Metropolitan Government requested medical institutions in Tokyo to consider restrictions on conventional medical care and secure beds for patients with the new coronavirus.

In Tokyo, the rapid spread of the infection could not be stopped, and 2848 new infections were confirmed on the 27th.

It was a record high with an increase of 1461 people, more than double that of Tuesday a week ago.

The number of inpatients is increasing, and as of the 26th, the bed usage rate is 45.5%.

The city requested a medical institution on the 26th to further increase the number of beds in anticipation of further spread of infection and an increase in inpatients.

Among these, the postponement of scheduled surgery and the suspension of some clinical departments are taken as examples, and consideration is given to limiting normal medical care, and beds are diverted and secured for patients with the new coronavirus. I want it.

The metropolitan government, "currently, beds that are secured" and aims to increase up to 6406 beds that are "to be able to ensure the maximum" the 5967 floor to the prospect August 6 days, medical institutions to open the briefing It is a policy to ask for cooperation from.

At hospitals in Tokyo, where doctors are dispatched to the Olympic competition venues, the beds that accept patients with the new Corona are full, making it difficult to admit more patients.

"Tokyo Hikifune Hospital" in Sumida Ward, Tokyo, has a total of eight doctors and nurses at the Olympic Games venue to handle the situation and accept patients up to moderate disease of the new corona.

In Tokyo, 2848 infections have been confirmed, which is the highest number in a day, and the hospital is planning to gather supporting doctors to deal with it, but 10 beds for hospitalization are full. ..

Since some of them have the same fever symptoms, it is difficult to distinguish between heat stroke and the new corona at the transportation stage, and there are many cases in which it is necessary to take thorough infection control measures.

The footage taken by the doctor shows a patient in his 50s examining the lung condition, and the symptoms are so severe that he was transferred to a hospital that can handle severely ill patients.

A large number of people visited the fever outpatient department every day, and of the 35 people tested each day, nearly half of them, 17 people, were positive on some days.

Dr. Kunihisa Miura, the deputy director who is in charge of both dealing with corona patients at the hospital and rescue at the competition venue, said, "Once a person who can be discharged is decided, a new patient will be hospitalized and the bed will be filled soon. It's a feeling. The length of hospital stay has been long since the Delta strain became epidemic, and the number of patients accepted will decrease accordingly, which will upset the balance between supply and demand, "he said.

On top of that, "I'm doing everything I can, including emergency outpatients, fever outpatients, vaccinations, and hotel caregivers, and I have to deal with anything at the Olympics. I'm trying to help someone who is there, but I can't see the end. I have to get over the national crisis with the cooperation of medical staff. "

Reporter's commentary What kind of measures are necessary for the cause of the rapid spread of infection?

There was an announcement that there were 2848 people, but how should we look at this number?

There are so many.

A state of emergency was declared in Tokyo from the 12th of this month, and now it's been two weeks.

Until now, the infection situation had settled down about two weeks after the declaration was issued, but this time, the number of infected people has not decreased as expected.

Although there is a possibility that the tests may have been biased due to the effects of the four consecutive holidays, it can be said that the infection is severe.

What is the cause?

There are various possible reasons, but one is that the mutant virus confirmed in India is being replaced by the "Delta strain".

The National Institute of Infectious Diseases estimates that it will exceed 75% by the end of July.

The Delta strain is said to be about 1.4 times more infectious than the mutant virus that has spread so far, and requires more attention than before.

In addition, the number of people has not decreased sufficiently.

Infection with the new coronavirus occurs when people come into contact with each other.

Even after the state of emergency was declared, the number of people in downtown areas in Tokyo was not as low as it was in previous declarations.

It is also possible that there were many factors that increased the number of people, such as last week's four consecutive holidays, the Tokyo Olympics, and summer vacation.

that the elderly are being vaccinated with vaccines is a different factor from the previous epidemics.

However, considering the status of vaccination to non-elderly people, it is not yet considered that the spread of infection in Japan will be stopped by the effect of the vaccine alone.

Due to the effect of the vaccine, the number of elderly people who become seriously ill or die even if infected is decreasing.

However, at present, people in their 40s and 50s who have not yet been vaccinated are becoming more serious.

In addition, the number of moderately ill patients who require administration of high-concentration oxygen, even if they are not severe, is increasing, and medical staff are saying that the burden on medical staff is increasing. There is.

If the number of infected people continues to increase, there is concern that the medical strain will become more serious.

What kind of measures are necessary?

is important to hurry to get the vaccine, but for the time being, it is necessary to take more thorough measures to control the infection, such as suppressing unnecessary and unurgent going out and avoiding contact with people. ..