Nanjing's "Top Wind" War Epidemic: The city's operation slows down and the virus speeds up 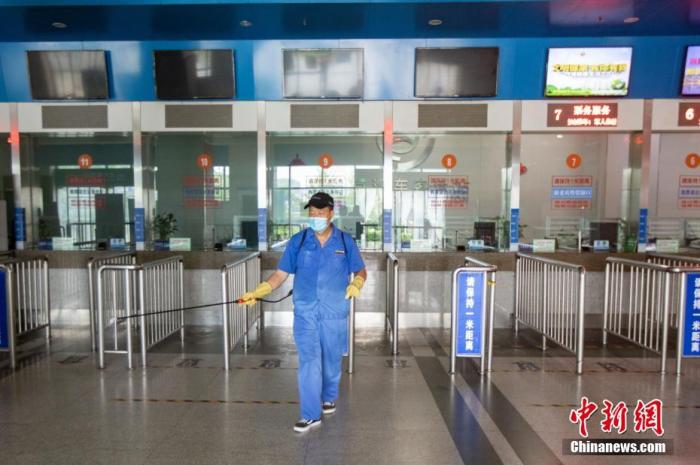 China News Service, Nanjing, July 27th (Reporter Zhu Xiaoying Yangbo Shenran) On the evening of the 27th, a reporter from China News Service saw inside the Nanjing subway station that security personnel were reviewing the health codes for incoming passengers.

Typhoon "Fireworks" is passing through Jiangsu, and the streets of Nanjing are stormy.

On weekdays, the passenger flow of Nanjing Metro, which is heavily crowded, has dropped sharply.

The station halls and carriages were empty.

On July 27th, inside the Nanjing Bus Terminal, the staff were killing them in the ticket hall.

On the 27th, it has been one week since Nanjing notified that a positive result was detected in the regular nucleic acid test samples of staff at Lukou International Airport on the evening of the 20th.

In the morning of the same day, Nanjing held a press conference to announce that by 24:00 on the 26th, the city had reported a total of 106 local confirmed cases and 6 local asymptomatic infections. It was confirmed that the virus was caused by the highly toxic and contagious Delta. Variant strains.

Risky communities are rated and sealed, automobile passenger stations are closed, passenger traffic at railway stations has plummeted, and some scenic spots, museums, cinemas and other cultural and entertainment venues are temporarily suspended.

In the past few days, the operation of Nanjing, a megacity in the Yangtze River Delta with a permanent population of more than 9 million, has been slowing down in an orderly manner.

In order to make the "sick" cities get better as soon as possible, the people in the cities acted in their respective roles.

Lukou Street is located at the southernmost end of Nanjing City, only about 10 kilometers away from Lukou International Airport.

Many communities in Lukou Street have been designated as high-risk areas and are in a closed state.

52-year-old Li Guangjin took the initiative to sign up for volunteers.

In the heavy wind and heavy rain, he put on his poncho and rode on the battery car to purchase and deliver meals to the home quarantine staff in Chenggong Village, Lukou Street.

Many of the people in quarantine at home are airport workers.

"The'fighting' all night is very tiring, but I also contributed to it, hoping to control the epidemic as soon as possible."

Nanjing Bus Terminal is also among them, but retains a window for receiving refunds and consulting services.

During the more than an hour when a reporter from China News Agency stayed at the station, the heavy rain did not stop, and only a few tourists came to inquire and refund tickets.

According to the staff, although the station has been closed, the work has not stopped. It is necessary to stick to the post and provide good protection services for the passengers.

In many large supermarkets in the main city, daily necessities such as rice noodles, oil, meat, eggs, milk, vegetables and fruits, convenience food, toilet paper, etc. are continuously supplied, and the shelves are basically full.

Local residents shop rationally, normally, and in an orderly manner.

There are tens of thousands of residents within 3 kilometers of Jinrunfa Longjiang Supermarket in Nanjing City, which is located in the downtown area.

“One hundred calls every day are soft, group messages are swiping, and the mobile phone cannot be left with the power bank always plugged in.” Fu Ying, manager of the supermarket customer service department, described her state since the fight against the “epidemic” to a reporter from China News Agency.

Fu Ying told reporters that online orders in supermarkets have increased by 50% compared to usual, and the best-selling products are still rice noodles, oil, meat, eggs, and milk.

The company's headquarters has opened a green channel, giving priority to Nanjing for distribution, and the supply of goods is abundant.

The epidemic prevention and control is entering the most urgent stage.

Virus tracing, tracking, and setting up "fences" are speeding up.

Nanjing is expanding the scope of management and control and intensive screening.

Within a week, Nanjing has carried out two rounds of nucleic acid tests for all employees, involving a population of more than 9 million.

In response to the rapid increase in throat swab samples in a short period of time, on the basis of mobilizing the existing 76 new coronavirus testing institutions, Nanjing has urgently opened up the construction of "Huoyan" laboratories, "Falcon" laboratories, etc., to increase nucleic acid Test your ability.

Chen Wurong, director of production support at BGI Gene Delivery Center, told China News Agency that after the laboratory is put into use, if the "10-person mixed acquisition" model is adopted, the single-day nucleic acid detection capacity can reach up to 2 million copies.

The inspection team of the Zhongda Hospital affiliated to Southeast University came into close contact with the new crown virus every day. 22 people turned around and could "grab" nearly 10,000 nucleic acid test reports within 24 hours.

During the interview, Wu Guoqiu, director of the medical laboratory department of the hospital, said: “We are actively responding, increasing staff, deploying equipment, optimizing processes, and promoting nucleic acid testing in an orderly manner.”

"Where are you going?" "Please show your health code and nucleic acid test certificate"... At the inspection point of the Shanghai-Chengdu Expressway, traffic police, urban management, etc. jointly perform duties to check the drivers and passengers leaving Nanjing one by one.

The vehicles that did not meet the requirements were stopped immediately and turned back to the city along the traffic guidance line.

The police force at the scene is abundant, the public has a high degree of cooperation, and the inspection speed is very fast.

"With the full mobilization and the cooperation of the whole people, I believe we can win this battle." The Nanjing Public Security Bureau Traffic Management Bureau policeman Zeng Celi, who is on duty in the wind and rain, said.