On the eve of Typhoon "Fireworks" landing: Zhejiang opened more than 10,000 resettlement sites, peace of mind

China News Service, Taizhou, July 25 (Shao Yanfei, Fan Yubin, Li Dianlinbo) On the 24th, this year's No. 6 typhoon "Fireworks" is approaching. There are many places in Zhejiang, and there are short-term rainstorms in some areas. The real test of wind and rain for Zhejiang is about to begin. .   According to the Central Meteorological Observatory, at 16:00 on the 24th, Typhoon Fireworks was abou 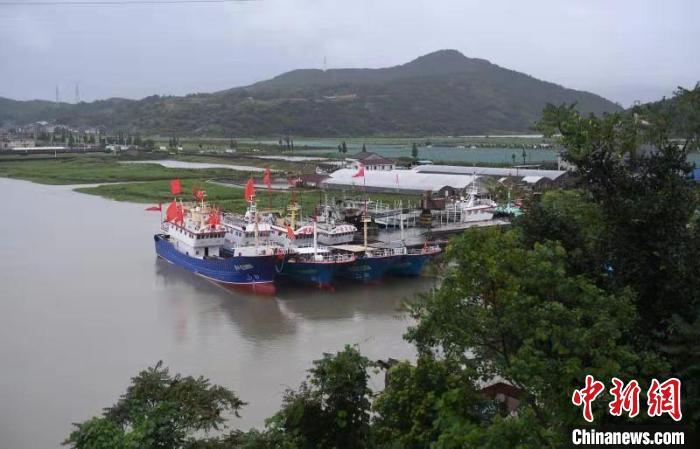 China News Service, Taizhou, July 25 (Shao Yanfei, Fan Yubin, Li Dianlinbo) On the 24th, this year's No. 6 typhoon "Fireworks" is approaching. There are many places in Zhejiang, and there are short-term rainstorms in some areas. The real test of wind and rain for Zhejiang is about to begin. .

According to the Central Meteorological Observatory, at 16:00 on the 24th, Typhoon Fireworks was about 315 kilometers southeast of Xiangshan County, Ningbo City, Zhejiang Province. Zhejiang is close to the coast, and it is most likely to make landfall from Zhoushan to Sanmen Bay from the afternoon to night on the 25th (typhoon-level or strong typhoon-level at the time of landfall). After landing, the intensity gradually weakens and the movement is slow in Zhejiang.

The Sanmen fishing boat in Taizhou, Zhejiang returned to the port.

On the eve of the landing of the typhoon "Fireworks", reporters from Chinanews.com went to Xiangshan County, Ningbo City and Sanmen County of Taizhou City on the coast of Zhejiang Province in two groups on the 24th to interview and found that they were facing strong, large, and abundant "fireworks". , All regions are intensively building protective walls to fight the initiative.

From cities to villages, reporters visited many resettlement sites, and people who avoided the typhoon were properly resettled.

At 11 o'clock on the 24th, a reporter from China News.com No. 1 drove from Hangzhou to Sanmen, Taizhou. At the time of departure, the roads in Hangzhou city were affected by short-term rainfall, and there was water in low-lying roads.

When the car reaches the Keqiao section of the expressway in Shaoxing, there are sometimes heavy rains. The driver will turn the wiper to the maximum so that the car can drive at the lowest speed and high speed. The rain and the stirred water mist make the outside of the car white and the visibility is suddenly less than 50%. Meter.

On the road, each car turned on the "double flash" to remind each other.

The car headed east to the Yuyao section of the expressway. The wind stopped and the rain stopped. The sky gradually lit up, and everything seemed very calm.

Only the water mist caused by the driving of vehicles on the expressway reminds the "fireworks" of the imminent attack.

At about 15:00 on the 24th, the reporter arrived in Sanmen County. The heavy rain came again. The county town was extremely deserted. Billboards large and small on both sides of the road were removed.

The "fireworks" is coming, and the coastal towns are in full battle.

Walked into the disaster shelter of Xinhu Elementary School in Sanmen County, and more than 20 workers watched the live broadcast of the Tokyo Olympic Games in the classroom.

Deng Zhonglin, a migrant worker from Sichuan, was transferred to the resettlement site on the evening of the 23rd.

"Anti-typhoon encounters the Olympics. It is the first time for me to watch the Olympics in such a special way. I hope that the typhoon will pass soon so that we can go back soon." Deng Zhonglin said.

Walked into the disaster shelter of Sanmen Technician College, the indoor air-conditioning temperature was suitable, and food such as water, instant noodles, cake, milk, eggs were provided free of charge, and the library, basketball hall, movie theater and other venues were opened to the public.

"Many of our workers come from Guizhou, Sichuan, Anhui and other inland provinces. The environment in the resettlement sites is good, and we also distributed daily necessities so that everyone can live in peace of mind." said Li Guojun, the site leader of the Zhongtian Liuxiangyuan project. .

As of the evening of the 23rd, more than 500 people have been transferred to the resettlement site.

Liu Shangwei, deputy secretary of the Party Working Committee of Sanmen Economic Development Zone, told reporters that they will pay attention to whether the personnel are out and other situations while doing logistical services to ensure that the personnel in the resettlement sites are safe and orderly.

"I hope they will not be upset here and get through the typhoon period safely."

Many migrant workers rested in the dormitory of Sanmen Technician College in Taizhou, Zhejiang.

In the next few days, the resettlement site will be their common home.

Ma Hongren, a Shandong native, works at a construction site in Xiangshan, Ningbo. He is no stranger to typhoons.

"I have worked in Wenzhou, Zhejiang for 10 years, and there are typhoons every year. I know the power of typhoons, so I came to the resettlement site with my workers early."

According to Lin Huijian, the principal of Yanchang Primary School in Xiangshan County, the resettlement site has 30 classrooms and is estimated to be able to accommodate more than 600 people.

"From the evening of the 23rd to the 24th, more than 230 people came to avoid the typhoon one after another. We will do a good job in guaranteeing our services."

In Yiwu, Jinhua, Zhejiang, the government and enterprises worked together to solve the problem of local worker placement.

"At present, there are more than 1,300 construction workers in our community who need to be resettled. According to the epidemic prevention and control regulations, we have arranged 5 resettlement points and also set up 2 spare points to ensure that the construction workers can live comfortably." Fu, Choujiang Street, Yiwu City Said Wang Yongqiang, secretary of the Party Committee of the Hong Kong Community.

"We have vacated 30 rooms, each with 4-6 beds, which can accommodate 130 people. The company canteen will also be open, and there will be warm meals for three meals a day." Zhejiang Mengna Hosiery Co., Ltd. Deputy General Manager Wu Xiaobin said that until the typhoon warning is lifted, construction workers can live here with peace of mind.

Under the emergency response to Typhoon Class I in Zhejiang Province, as of 12 o'clock on the 24th, according to incomplete statistics, the province has opened a total of 10,780 disaster shelters, of which 2,737 are used.

In terms of personnel transfer, as of 15:00 on the 24th, Taizhou City has evacuated or transferred 82418 people from various dangerous areas.

As the typhoon is approaching, many places in Zhejiang have reassured people with "settlement" and went all out to let more people survive the test brought about by the "fireworks".