Information on the front line of Zhejiang’s anti-Taiwan defense: "Thousand Sails" returned to Hong Kong and transferred to Hong Kong

China News Service, Ningbo, July 25th (Lin Bo Xiang Jing) This year's No. 6 typhoon "Fireworks" (typhoon-level) is approaching the coast of Zhejiang, the most likely to be from Zhoushan to Sanmen Bay from the afternoon to night on the 25th. Landing on the coast. On the 24th, a front report team of five people sent by China News Agency drove from Hangzhou, Zhejiang to Xiangshan, Ningbo, to hit th 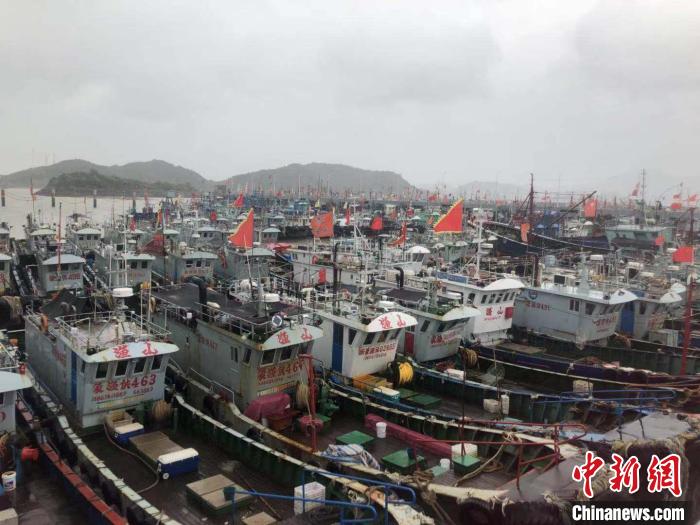 China News Service, Ningbo, July 25th (Lin Bo Xiang Jing) This year's No. 6 typhoon "Fireworks" (typhoon-level) is approaching the coast of Zhejiang, the most likely to be from Zhoushan to Sanmen Bay from the afternoon to night on the 25th. Landing on the coast.

On the 24th, a front report team of five people sent by China News Agency drove from Hangzhou, Zhejiang to Xiangshan, Ningbo, to hit the "first scene" before the "fireworks" landed.

According to the Zhejiang Meteorological Observatory, the center of the "firework" at 17:00 on the 24th was located on the East China Sea about 310 kilometers southeast of Xiangshan County. The maximum wind force near the center was 13 (40 m/s), and the lowest pressure at the center was 960 hPa.

Located on the coast of the East China Sea, Xiangshan is surrounded by the sea on three sides and embraced by two harbors. It has experienced typhoons landing on many occasions in history.

According to the current forecast of the typhoon path, the county is also one of the most likely areas for "fireworks" to land.

On the highway from Ningbo city to Xiangshan, there used to be cars coming and going on weekends.

When the reporter drove there at 15:00 on the 24th, there were only a few vehicles on the highway.

Due to continuous rainfall due to typhoon weather, vehicles have a speed limit of 80 yards and light up "double flash" to pass.

When passing the bridge, because the cross wind is relatively strong, you can feel the body shake obviously.

Along the way, wind and rain hit the windows of the car. As we moved forward slowly, the wind and rain became stronger as we approached Xiangshan.

The Ningbo Meteorological Observatory predicts from today to the day after tomorrow, there will be torrential rains to heavy rains in the city, and local extremely heavy rains.

The dark clouds weighed down on the city, and the ship docked.

As the "fireworks" approached step by step, when the reporter arrived at the sheltered anchorage of Chongzhan Port in Xiangshan County, it was in heavy wind and heavy rain.

At the scene, steel fishing vessels were connected end to end, and nearly 700 ships docked neatly.

"Chongzhan Port is a professional wind shelter in Xiangshan, with a designed wind resistance of over 12 and a maximum wind resistance of 17." Xu Jintao, deputy squadron leader of the fourth squadron of the Xiangshan County Ocean and Fishery Law Enforcement Team, said in an interview that in the early stage, the local dock cable The piles and other infrastructure were reinforced, and fishermen’s emergency evacuation channels were also set up along the line, and multiple settlement points were arranged.

In the evening, some power supply workers were inspecting the power supply lines at Chongzhan Port, and also assisted the "Boss" to inspect the operation of the ship's electrical equipment and self-provided emergency power supply to ensure the safety of electricity use during the typhoon.

A scene from Chongzhan Port by Lin Bo

The reporter learned that a large number of fishing boats have been transferred to other safer anchorages.

As of 15:00 on the 24th, 2827 fishing boats in Xiangshan County entered safe waters to take shelter from the wind, and all 12 passenger routes in the county have been suspended.

In the Yanchang Primary School in Shipu Town, workers transferred from nearby construction sites are taking shelter from the wind.

"I came here yesterday afternoon with a quilt and a mat." Ma Hongren, from Zaozhuang, Shandong, came to Xiangshan to work in 2020. He said, "We go if the wind goes, we won't go if the wind doesn't go."

Lin Huijian, the principal of Yanchang Primary School, said that the school has 30 classrooms with a maximum capacity of more than 600 people. “We have arranged faculty and staff to do a good job of service. You can contact us if you need it.”

The gate of a farmhouse in Xiangshan is closed and the gate has been blocked by wooden stakes to prevent the typhoon from hitting Limbo.

According to Shi Yan, a staff member of the Shipu Township Government, the town has opened 7 resettlement sites to accept workers and villagers. “Every resettlement site has people on duty 24 hours a day, trying to ensure the basic daily needs of the displaced people.”

In the face of the surging of "fireworks", as of 9 o'clock that day, Xiangshan County had transferred 18042 people, including 3,710 people in marine breeding, 7942 people in construction, 1014 people in dilapidated houses, 297 people in geological disaster sites, and widowed elderly people, etc. There are 325 people in special groups and 4,068 other people.

On the same day, Zhejiang Province and Ningbo City both upgraded their typhoon-prevention emergency response to Level I.

According to the latest news from the Zhejiang Meteorological Service Center, the "firework" has landed ashore. With the countdown to the landing of the typhoon, the coastal area of ​​Zhejiang is ready to fight the "Typhoon Defense War".