Before the "Fireworks" Strike: "Aid" and "Warm" in Hangzhou, Zhejiang

China News Service, Hangzhou, July 25 (Zhang Yuhuan and Wei Yanran) The rainfall in the past 12 hours reached 206.3 mm-such a short period of rainfall caused the evolution of the stream to rise over the road and form stagnant water, which made the evolution town of Xiaoshan District, Hangzhou Dongshan Village was somewhat "surprised".   Affected by the periphery of the typhoon "Fireworks", Hang 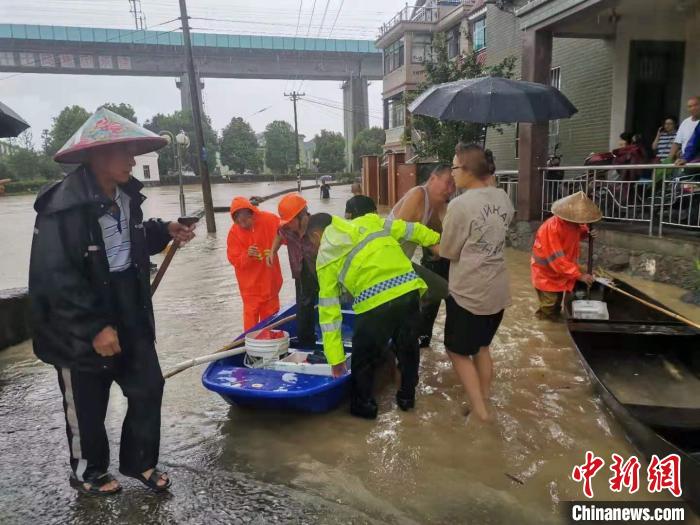 China News Service, Hangzhou, July 25 (Zhang Yuhuan and Wei Yanran) The rainfall in the past 12 hours reached 206.3 mm-such a short period of rainfall caused the evolution of the stream to rise over the road and form stagnant water, which made the evolution town of Xiaoshan District, Hangzhou Dongshan Village was somewhat "surprised".

Affected by the periphery of the typhoon "Fireworks", Hangzhou had heavy rains to heavy rains, some heavy rains, and some extreme heavy rains in mountainous areas from the 24th to the 26th. The maximum gusts were 8-11 and local 12th.

In the area of ​​heavy rainfall, Xiaoshan District "bears the brunt", and emergency rescues are also relayed.

A yellow rescue rope runs across the stagnant water, one end is the trapped residents, and the other is the firefighters pulling the rope.

The trapped persons held the rope tightly with both hands and approached the firefighters from the flooded house, with turbulent water under their feet.

On the morning of the 24th, in Jishan Village and Huajiadian Village of Hualien Town, the Evolution Creek overflowed on the road and accumulated water, which seriously affected the normal road traffic.

After discovering the danger, the local towns and villages organized an emergency team of more than 100 people to carry out rescue operations at the scene.

At the scene, the team used 5 excavators to dredge the severely watery sections of the road area. The Maoshan Gate of Evolution Creek has been operated at maximum power to reduce the water level of Evolution Creek as much as possible.

More than 200 rescue forces including the militia and firefighters in the area have strengthened and evacuated the trapped people in the village.

At 14:00, the Xiaoshan District Fire Rescue Brigade Command Center received an alarm again. An old man in Taipingqiao Village, Huali Town, had a heart attack. The external road was blocked and the ambulance was difficult to enter. Fire rescue was urgently needed.

The command center immediately dispatched the Xiaoshan Fire Rescue Station to the scene for rescue. After arriving at the scene, the firefighters found that the water level in the village had risen to the waist and the situation was critical. The commander immediately waded into the trapped old man’s home on foot under the protection of a tow rope.

After seeing the old man, the firefighter immediately picked up the old man and moved him to a safe area.

Ordinary vehicles on the road out of the village could no longer wading through the water. Everyone helped the elderly on the fire truck and sent them to a nearby hospital for treatment.

Photo courtesy of the Publicity Department of Gongshu District Committee

There have been no casualties or house collapses.

More than 200 people have been transferred from towns and streets in the southern part of the district.

Under the torrential rain, a rescue rope connected the hope of the trapped, and the broad back of the fire fighter became a solid pillar for the trapped elderly.

In the corners of Hangzhou, many forces are running on the front line of resisting wind and rain.

The fire department is dealing with water on the road.

Photo courtesy of the Publicity Department of Gongshu District Committee

People built a line of life defense on the front line of rescue: On the afternoon of the 24th, the water level of Wulian Creek in Changlu Town, Fuyang District, Hangzhou City soared, the road was washed out, the village was flooded, and a 70-year-old man was inadvertently caught in the water. Washed away.

After the local cadres and the masses tried their best to search, the old man was found at about 16:30, and he was immediately sent to the hospital for treatment.

People used warmth to guard the weak under the rainstorm: On the 24th, social worker Yang Xin (a pseudonym) knocked on the door of Grandma Zhou in Xinyanyuan Community, Dongxin Street, Gongshu District, Hangzhou City.

Grandma Zhou is a blind person in her 80s. Yang Xin specially came to bring daily necessities to the elderly and told them not to go out these two days.

There are 8 elderly people living in the rest center of the "Yile Hemu" elderly care service complex in Gongshu District. Hemu Community distributes snacks and milk for the elderly, and uses sandbags to block the low-lying water in the rest center to prevent rain. Backflow.

The heavy rain in Hangzhou continues, and the footsteps of Typhoon "Fireworks" are gradually approaching.

But the warm rescue moments showed the temperature of the city and the confidence to tide over the difficulties hand in hand.