Zhengzhou Jingguang Road tunnel confirmed that some people were killed: the full-horse-powered flood drainage part of the tunnel penetrated 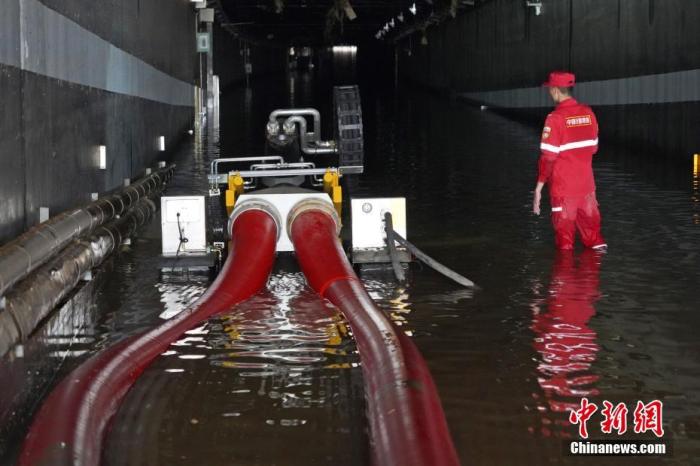 "Our 18 "Dragon Water Absorbents" are fully powered and run at full capacity."

At 6 o'clock on July 24, after the Natural Disaster Engineering Emergency Rescue Center of the Ministry of Emergency Management of China (China Aneng), the Huaihe Crossing Tunnel in the Beijing-Guangzhou Section of Zhengzhou City achieved two-way penetration and bottomed out and was undergoing comprehensive testing.

A continuous heavy rainfall made Zhengzhou a "water city", and serious waterlogging occurred in the urban area, resulting in serious water accumulation in the Beijing-Guangzhou Expressway tunnel, the "main artery" of Zhengzhou.

Public reports show that the south of Jianshe Road on Jingguang Expressway is 2 kilometers of flat roads and 4.3 kilometers of tunnels.

In the past few days, the rescue and drainage of the Jingguang Road Tunnel, which has attracted much attention from the society, has continued, and it has been confirmed that some people have been killed.

The official "Henan Release" WeChat account quoted Xinhua News Agency on the 23rd as saying that the Zhengzhou Jingguang Road Tunnel that was submerged in the heavy rain has attracted much attention. Hundreds of vehicles are piled up at the south exit of the tunnel. The rescue team is currently working. The tunnel was drained, but there is still a large amount of water in the tunnel. It has been confirmed that some people have been killed, and the specific number of people is still being verified.

The reporter visited on the same day and learned that China Aneng’s 18 “Dragon Water Absorption” units that are currently participating in the rescue are fully equipped to drain water, and the water level of the north-south tunnel on Jingguang Road has dropped significantly.

After confirming the safety, the reporter followed the rescuers into the exit tunnel of Zhongyuan Road of Jingguang Road Tunnel on the afternoon of the 23rd. Drainage machinery and equipment roared through the ears. Tang Wen, the operator of the "Dragon Water Absorption" robot, was in the water to ensure "Dragon Water Absorption". The operation of the water pump is safe.

In this rush to Zhengzhou, China Aneng dispatched 22 "Dragon Suction", of which 18 were distributed in multiple tunnels on Jingguang Road for flood drainage operations.

Public information shows that the "dragon water suction", known as the "artifact" of flood fighting, is an emergency drainage rescue vehicle with a maximum pumping capacity of 3,000 cubic meters per hour.

"When I first arrived, the water level in the tunnel was full." Li Yongxiang, head of the China Aneng Rescue Beijing-Guangzhou Tunnel Group, said in an interview with a reporter from China News Agency on the evening of the 23rd. Two are here."

"Except for refueling, it runs at full capacity," Li Yongxiang said.

The latest statistics show that after many days of continuous uninterrupted operations, as of the morning of July 24, China Aneng has pumped more than 3.69 million cubic meters of water at various mission points in Zhengzhou this time, and the water level of the north-south tunnel on Jingguang Road has dropped significantly.

In addition to the Jingguang Road tunnel, the reporter found that Zhengzhou still has the Longhai Road-Malu intersection tunnel, Jinshui West Road tunnel, Huanghe Road tunnel and other tunnels with serious water accumulation. The rescue forces of all parties are also "full fire" for drainage. Operation.