China News Service, Hangzhou, July 23 (Zhang Yuhuan, Huang Lingyi and Wei Yanran) "Fireworks" are approaching, and storms are coming. According to the Zhejiang Meteorological Observatory, this year's No. 6 typhoon "Fireworks" (strong typhoon level) is most likely to make landfall on the north-central coast of Zhejiang Province from the afternoon of the 25th to the early morning of the 26th (typh 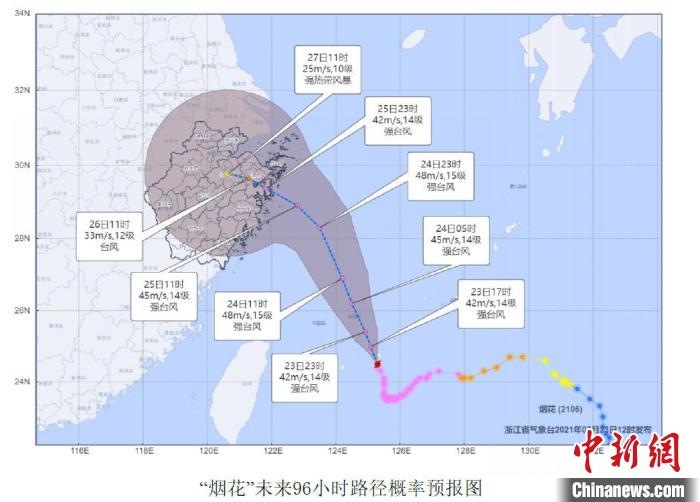 According to the Zhejiang Meteorological Observatory, this year's No. 6 typhoon "Fireworks" (strong typhoon level) is most likely to make landfall on the north-central coast of Zhejiang Province from the afternoon of the 25th to the early morning of the 26th (typhoon-level or strong typhoon level at the time of landfall).

Affected by the surrounding areas, heavy rains have occurred in Ningbo, Taizhou, Shaoxing and other places in the province since the 22nd.

As the intensity of "fireworks" continues to increase, it is expected that there will be swelling waves from 8.0 meters to 10.0 meters in the central and southern waters of Zhejiang on the 24th. The province has issued warnings of geological hazards and mountain flood disasters, and the passenger ferry on the water will be suspended. Agriculture, transportation, water conservancy, urban management and many other departments are ready to fight.

The reporter learned that the powerful typhoon "Fireworks" has the characteristics of strong intensity, wide cloud system, slow moving speed, and long impact time, which will have serious impacts on Zhejiang.

Tong Huabin, deputy director of the Command Center of the Zhejiang Provincial Emergency Management Department, said that the "fireworks" typhoon has wide clouds and abundant water vapor. In the future, it will stagnate on the coast or inland of Zhejiang for a long time. Whether it is landing or going northward, it will bring more to the eastern part of Zhejiang. Heavy rainfall.

In addition, since the typhoon landed on the sixteenth lunar calendar, which coincided with the astronomical tide period, it would have a greater impact on Zhejiang seawalls and would not be conducive to drainage and flood discharge in various places.

The Zhejiang Ocean Inspection and Forecasting Center has issued a wave level I warning (red). It is expected that there will be 8.0 meters to 10.0 meters violent waves in the central and southern waters of Zhejiang on the afternoon of the 24th.

The Meteorological Department reminded that due to the long impact of "fireworks" and large accumulated rainfall, extreme precipitation may occur in some areas of Zhejiang, and the risk of secondary disasters such as mountain torrents, mudslides, and urban and rural waterlogging is extremely high.

The Department of Natural Resources of Zhejiang Province and the Department of Water Resources of Zhejiang Province have successively issued warnings of meteorological risks for geological disasters and mountain torrents. From 8 am on the 23rd to 8 am on the 24th, some areas of Ningbo, Shaoxing, and Taizhou have higher meteorological risks for geological disasters (yellow warning). Mountain torrent disasters are more likely to occur in Fenghua District, Yuyao City, and Shangyu District (yellow warning).

As the wind and rain are approaching, many places in Zhejiang have set up "warning lines" against typhoons.

To ensure safety, as of 11 o'clock on the 23rd, more than 530 cargo ships in Taizhou's jurisdiction entered the port for shelter, including 148 key ships.

Construction of 20 wading projects in Taizhou's jurisdiction has been suspended, and all 20 passenger ferry routes have been suspended.

At present, Zhoushan has more than 2,800 commercial ships in harbor and nearly 6,000 fishing vessels in harbor. The sheltered waters of the jurisdiction are basically saturated with ships anchoring and avoiding typhoon.

Yushan Green Petrochemical Base, Liuheng Coal and Electricity Wharf and other large-scale terminals have all been suspended, and the water passenger ferry routes in Zhoushan's jurisdiction have been suspended.

At the same time, Zhejiang has deployed various defenses to strengthen emergency rescue forces in advance.

In terms of urban flood control, the Zhejiang Provincial Emergency Management Department requires Hangzhou, Ningbo, Wenzhou and other places to prepare sufficient sandbags, baffles, drainage pumps and other emergency materials and equipment at subway entrances and exits under the coordination of local governments, and implement management and control measures to prevent floods. Backflow affects the safety of subway operation.

At present, 25 large-scale drainage pump trucks in Hangzhou are in place, and emergency linkage plans have been formulated for the linkage of some subway construction areas, and temporary drainage measures have been implemented.