China News Service, Zhengzhou, July 21 (Yang Dayong) The reporter learned from the Zhengzhou Airport Public Security Bureau on the 21st that at 8 pm on July 20, Zhengzhou Airport launched a red warning for large-scale flight delays, and there were 6,800 stranded passengers in the T2 terminal. For the remaining people, 303 flights were cancelled that day, and the intercity railways, subways, taxi 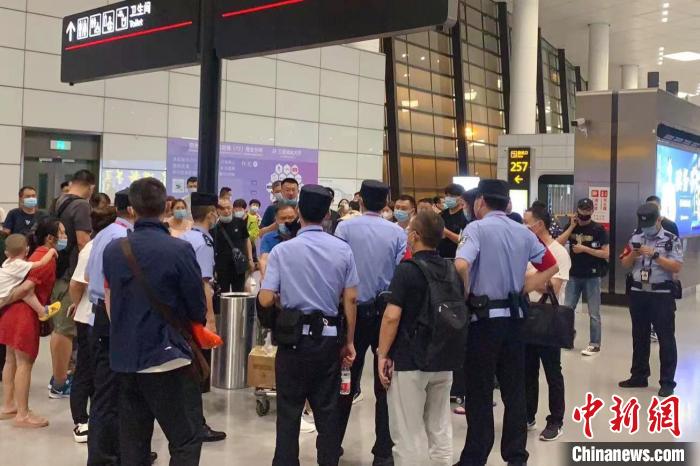 China News Service, Zhengzhou, July 21 (Yang Dayong) The reporter learned from the Zhengzhou Airport Public Security Bureau on the 21st that at 8 pm on July 20, Zhengzhou Airport launched a red warning for large-scale flight delays, and there were 6,800 stranded passengers in the T2 terminal. For the remaining people, 303 flights were cancelled that day, and the intercity railways, subways, taxis, online car-hailing, buses, and highways entering and leaving the airport were suspended and closed.

In the face of thousands of stranded passengers, the Zhengzhou Airport Public Security quickly sent more than 60 police officers, including security police, special police, and civilian police, to the T2 terminal to carry out 24-hour uninterrupted patrols, to calm passengers’ emotions, resolve conflicts and disputes, and coordinate airport-related matters. The security department has added emergency supplies such as sleeping pads, blankets, and food to assist airport staff in orderly diversion and proper placement of stranded passengers, stabilize passengers' emotions, and effectively maintain the stability of public order in Zhengzhou Airport.

The picture shows the Zhengzhou Airport police on duty.

As of 16:00 on the 21st, Zhengzhou Airport has cancelled the flight delay response warning level, and the operation in the terminal building is normal, but the scheduled departure and arrival flights have been significantly reduced.

The Henan Airport Police Warmly reminded that Zhengzhou City is still in the orange rainstorm and the yellow thunder warning. It is expected that there will be showers in the next 2 hours. The general public is pleased to take precautions.

In addition to civil aviation, Zhengzhou city public transport has been partially restored.

When he saw that his family was safe, a stone in his heart finally fell to the ground.

The picture shows a bus driving on the road after a heavy rain in Zhengzhou.

On the same day, the floods on the agricultural roads, Huayuan Road, Wenhua Road and other major roads in Zhengzhou that were hit by the heavy rain gradually subsided.

Although traffic has been resumed, some silt and rubbish remain on the road, and sanitation workers are stepping up to clean it up.

At 10 o'clock in the morning, the sky was drifting with sporadic drizzle, and there were more vehicles and pedestrians on Agricultural Road in Zhengzhou City.

Since the road has not been cleaned up completely, some vehicles are still stuck on the road, and buses have not yet passed, many people choose to ride or walk.

Speaking of the heavy rain on the 20th and the stagnant water on the road over knees, many people have lingering fears.

"I didn't know where I had the courage at the beginning. I actually braved the heavy rain, wading thigh-deep water, walked about three kilometers, and returned home. Now I think about it." Mr. Yang told reporters, "It is raining today. It's finally stopped and can pass on the street, great!"

During the interview, the reporter found that as Zhengzhou's roads are gradually reopening to traffic, the people are not worried about food, and some large shopping malls have sufficient supplies.

A salesperson at a supermarket on Nongye Road in Zhengzhou told reporters: “Due to the lack of water in some communities, more people buy pure water, other foods are normally purchased, and supermarket supplies are sufficient.

The person in charge of Zhengzhou Bus Company told reporters that as of 15:00 on the 21st, Zhengzhou Bus has resumed 78 production lines, and other bus lines will gradually resume depending on road safety.