China News Service, Zhengzhou, July 21st. Title: Reporter's Notes: Zhengzhou, keep praying in the rain   China News Service reporter Li Guigang   A rare heavy rainfall turned Zhengzhou into a "water city", and it also made me, the "Zheng Piao" who has lived here for nearly 20 years, a great surprise.   In my memory, in this provincial capital city with a climate closer to the north, no rain i 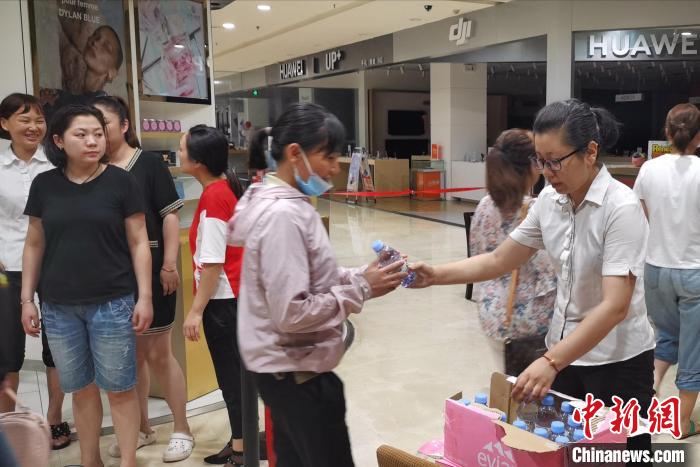 A rare heavy rainfall turned Zhengzhou into a "water city", and it also made me, the "Zheng Piao" who has lived here for nearly 20 years, a great surprise.

In my memory, in this provincial capital city with a climate closer to the north, no rain is the norm, and even in the flood season, there are only a few torrential rains every year.

The picture shows in the early morning, staff of a shopping mall in Zhengzhou provided drinking water to the trapped people.

Since July 18, Zhengzhou, which has an annual average rainfall of about 600 mm, has ushered in a continuous heavy rainfall pattern.

At the beginning, some people ridiculed in the "WeChat group": "I want to row a boat to see you!"

However, on the afternoon of the 20th, the heavy rains continued.

Inland Zhengzhou has gradually become a "water city". After completing the interview, I saw vehicles that had broken down in the water, floating objects swept away by stagnant water, neighborhoods where water and electricity were cut off, rescue vehicles and rescue personnel on the way back. Between the cities.

So far, this rainfall has been a first-level warning of natural disasters.

In the evening, Zhengzhou ushered in the peak period of off-get off work.

All of a sudden, going home became the biggest problem.

I took the subway twice and the bus once, then rode a shared bicycle for another 20 minutes, and then wade through the waist-length water with many pedestrians to get home. It took me an hour and a half, and I was soaked all over.

And this part of the journey usually only takes more than 20 minutes by car.

I am fortunate that there are still many people whose way home is blocked by the rain.

For this reason, many people in this city choose to stick to it and escort them.

"There was a wave at 1 a.m., and another wave at 2 a.m.. An old man’s shoes were washed away by the water, and I bought him a pair of slippers." At 3 a.m. on the 21st, Zhengzhou Wangfujing City Outlet The mall is still brightly lit. My friend Liu Wenjia and colleagues gave up going home and are busy distributing drinking water and bread to more than 40 citizens stranded in the mall.

The picture shows early in the morning, a fast food restaurant in a shopping mall in downtown Zhengzhou is open to citizens for free.

Under the night, there are faintly returning guests on the road.

Like the mall where Liu Wenjia is located, more and more kind shopkeepers, bosses, and companies choose to stick to it and extend a helping hand to some passers-by who have difficulty returning home. They provide shelters, food and accommodation for free, and make the cold rainy night more. It's warm.

The armed police, firefighters, public security officers, and medical staff also chose to stick to it.

They rescued the river rupture overnight, rescued passengers trapped under the subway, and transported hundreds of critically ill patients overnight.

According to official sources, Henan has dispatched tens of thousands of rescue workers to fight on the front line.

There was also good news that a large number of rescue teams were supporting Henan, and a torrent of warm current surged across the chest.

On rainy nights, my relatives and friends blasted my phone call, "What's the situation in Zhengzhou? Take care of your safety!" At this moment, the heavy rainfall in Zhengzhou has attracted widespread attention from the outside world, and the voice of greetings and cheering dominates the Internet.

In the middle of the night, the sound of Zhengzhou rain "bubbling" in the water continued, and my colleagues and I still stood by our posts, recording this rainfall that can be recorded in Zhengzhou's history.

And what I have in my heart is more to pray for Zhengzhou to be unharmed, and for the people of this city to return home safely.