Chinanews.com, Liuzhou, July 5th. Title: Guangxi Special Child Rehabilitation Specialist: Helping patients and their families return to society   Author Lin Xin   "I hope to help these special children stay away from disease and discrimination, receive normal education, so that patients and their families can integrate into the society." Liu Xia, director of rehabilitation technician in the Ch 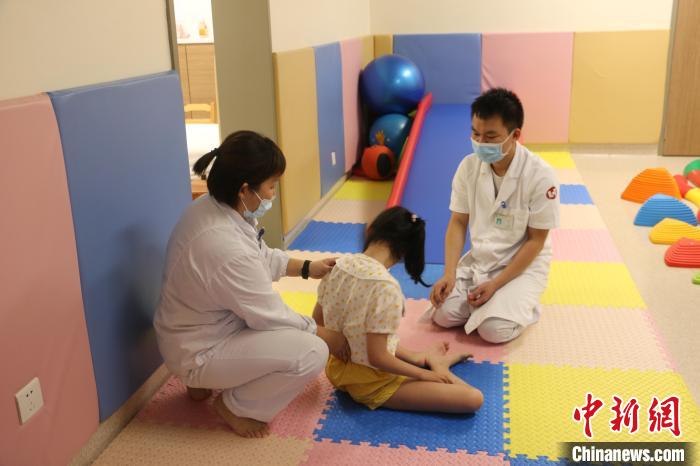 "I hope to help these special children stay away from disease and discrimination, receive normal education, so that patients and their families can integrate into the society." Liu Xia, director of rehabilitation technician in the Children's Rehabilitation Department of Liutie Central Hospital in Liuzhou City, Guangxi, said on the 5th.

By chance, Liu Xia became attached to children with special needs more than 20 years ago.

In 2002, Liu Xia was sent by her unit to the Rehabilitation Department of Hunan Children's Hospital for further training.

"I didn't know the industry at all. When I got there, I saw a 7-year-old boy who couldn't walk and had drool all over his body, but the head nurse didn't dislike it at all and encouraged him to climb slowly." Liu Xia said. At that time, she was moved by this professionalism, and later she gradually fell in love with this profession.

After the training, Liu Xia returned to the hospital to open a children's rehabilitation department.

In the Children's Rehabilitation Department, Liu Xia mainly treats children with cerebral palsy, autism and other diseases, and provides them with rehabilitation training.

"Stand up by yourself, walk slowly step by step, and walk ten steps to reward this candy." Liu Xia took a candy in her hand and encouraged a nearly 7-year-old child with cerebral palsy to take steps to learn to walk.

For these special children, often a simple action has to be repeated for several months.

Liu Xia once helped a premature baby with rehabilitation training.

"The child will not turn over at almost seven months old. When he came to the hospital, the whole body was very stiff." Liu Xia used massage to relax her limbs and promote the child's development.

With the help of Liu Xia, the premature baby slowly practiced turning over and raising his head.

"Just turning over, it took me a few months to learn." Liu Xia said.

When the patient's family encounters difficulties, Liu Xia will also help as much as possible.

The premature child has been trained until 3 or 4 years old and slowly learns to walk.

However, at this time, the patient's family can no longer afford to give the child rehabilitation training, and his mother has to take him back to his hometown.

In order to reduce the burden on patients' families, Liutie Central Hospital has applied to become the designated body organization of Liuzhou Disabled Persons' Federation.

Liu Xia said: “After becoming a designated organization, children trained here can receive a subsidy of 95 yuan a day, so that they can help more families.”

When these special children are undergoing rehabilitation training, they will suffer physical pain and sometimes resist, often catching Liu Xia's hands with strips of marks.

"But you have to understand the child, you can't blame him, he didn't mean it," Liu Xia said.

Seeing the children slowly recovering and returning to school, Liu Xia felt that everything was worth it.

"I once had a child with severe cerebral palsy. After rehabilitation training, he slowly returned to his normal life. Later he was admitted to a key high school. I was very pleased." Liu Xia said.

At work, Liu Xia found that in addition to the physical problems of the patient, the patient and family members are also under great psychological pressure.

She said, “Rehabilitation is a long process, and sometimes parents will feel desperate, be impatient with their children, or beat and scold them.” Once, Liu Xia heard a child even thought of committing suicide.

"I hope they can better return to society under the condition of mental health." Liu Xia said that this is what she has always pursued.