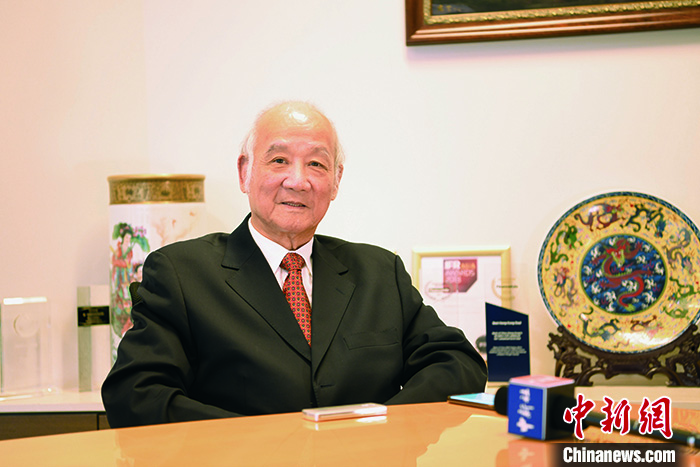 (The 100th Anniversary of the Communist Party of China) Shi Xuegui, a former Hong Kong affairs consultant: a hundred poems "Wang Jiangnan" looking back on the road for a hundred years

July 1, 2021 is approaching. Shi Xuegui, a former Hong Kong affairs consultant and director of the China Overseas Friendship Association, chose to write 100 poems from the ancient poem "Wang Jiangnan" to express his feelings for the 100th anniversary of the founding of the Communist Party of China.

"Ode to the Red Boat, the world is wide and the sky is wide. Generously recruit people and have dreams, and you are awe-inspiring to log in. Mingjing presents the beginning of the yuan." When Shi Xuegei was interviewed by a reporter from China News Agency a few days ago, he recited a hundred poems "Wang Jiangnan". The opening book.

Shi Xuegui, whose ancestral home is in Jinjiang, Fujian, is a well-known patriotic entrepreneur in Hong Kong. He has made great achievements in the creation of ancient poetry. He established the Shi Xuegui Poetry Award Foundation to reward poetry lovers.

On the 20th anniversary of Hong Kong's return in 2017, he edited and published the 2017 book of "Hundred New Poems of Returning Poems" and presented it to all walks of life, as well as the libraries of universities, middle schools and schools at home and abroad.

"When I was 14 years old, I went to Xiamen Jimei School from the countryside to study in junior high school. It happened that our school owner, Mr. Tan Kah Kee, returned to his hometown from Beijing. Every action and speech of the old man was from loving and contributing to the country. The theme is to educate the students of Jimei, and I have been greatly influenced by it." Shi Xuegui recalled his school days, "Our schoolmaster (Tan Kah Kee) taught us to devote our country to our country, and we all devote ourselves to the construction of New China with fiery hearts. "

"I am honored to be a Hong Kong affairs consultant, and I have also made some serious suggestions." Shi Xuegui said: "Hong Kong is the gateway to the motherland and has her special features. Although it has been returned for nearly 24 years, the hearts of the people have not yet returned. But as Chinese people, first of all, must have a very good feeling, that is, patriotism, patriotism is just as natural as loving our parents."

Shi Xue generally stated that Hong Kong’s illegal “Occupy Central” in 2014 and the “black violence” in 2019 have caused unrest and turmoil in Hong Kong society.

"Our country has done a lot of work. The construction of the Guangdong-Hong Kong-Macao Greater Bay Area will give young people in Hong Kong more rushes, but it is also necessary to educate young people to love the country and Hong Kong, and to have a correct attitude." Shi Xueguan believes that Hong Kong society, especially Hong Kong youth, should be objectively recognized. The Communist Party of China, because without the Communist Party of China, there would be no rejuvenation of the Chinese nation, and there would be no "one country, two systems".

He tried to use poetry creation to help citizens understand the Chinese Communist Party.

Talking about why he chose the poem "Wang Jiangnan" to fill in the lyrics, Shi Xue said: "The "Wang Jiangnan" has two kinds of monotonous and bi-tonal. I mainly use bi-tonality and monotonous as a supplement, just like safflower and green leaves, showing ancient poetry. Unique charm." He takes the centuries of the Chinese Communist Party as the main line. While pursuing the unique style of each poem, he also reflects the continuity of history. The difficulty of creation is not small. After more than half a year of deliberation and recitation, he finally In late June, 100 poems "Wang Jiangnan" were filled, of which 10 poems related to Hong Kong.

"The people are good, Xiangyueyugui. Wandai Hongji sings together, the ages are great in the same period. The nectar is always the same." Shi Xuegui said: "I have greater expectations of the Communist Party of China, and this expectation is placed on this 100th. In the first "Wang Jiangnan"." (End)